Flooding at Ingram Terrace after Tropical Storm Eta. Courtesy photo
Last week, as Tropical Storm Eta swept over South Florida, soaking the region with several inches of rain, 52-year-old Darlene Reece was awakened from her slumber by a neighbor around 4 a.m.

Reece jumped to her feet and ran outside, where her 2014 Chevrolet Impala was already filled with several feet of floodwater. Neighbors helped her push the car out of the parking lot.

"That was what saved me," she says. "If not, my car would have been totaled."

For the past ten years, Reece and other residents at Ingram Terrace — an affordable-housing complex in Opa-locka — have dealt with flooding from even the smallest of storms. At the 40-unit building, where renters pay between $600 and $700 a month for a two-bedroom apartment, almost everyone owns a pair of rain boots and has a stash of special towels they use to mop up the floodwaters.

For the past ten years — ten very long, very wet years — residents have been complaining to the apartment's management and to the City of Opa-locka, which is responsible for the road in front of the apartment building, NW 131st Street. But the city's well-documented financial struggles meant years were wasted fighting with Miami-Dade County about who should pay to fix the problem. Since 2010, the topic of flooding at Ingram Terrace has come up during at least 17 city commission meetings, with residents growing more exasperated with each passing year.

In 2010, Commissioner Joseph Kelley sponsored a resolution asking the city manager to "take the necessary steps" to fix the problem. The next year, Opa-locka's problematic mayor, Myra Taylor, told a resident that the flooding at Ingram Terrace was one of her personal "pet peeves." She would express the same sentiment three years later at a commission meeting in 2014.

That year, the city approved a $40 million state loan that was supposed to be used to fix longstanding infrastructure problems, including flooding. But the terms of the loan proved too restrictive to make it of any use — the state said it would reimburse Opa-locka for the construction, but the city was too broke to front the money, according to a budget document from the 2016-17 fiscal year.

In 2018, a Miami-Dade employee reported to the city commission that the county wouldn't assume responsibility for the drainage issue, saying it was the city's problem. 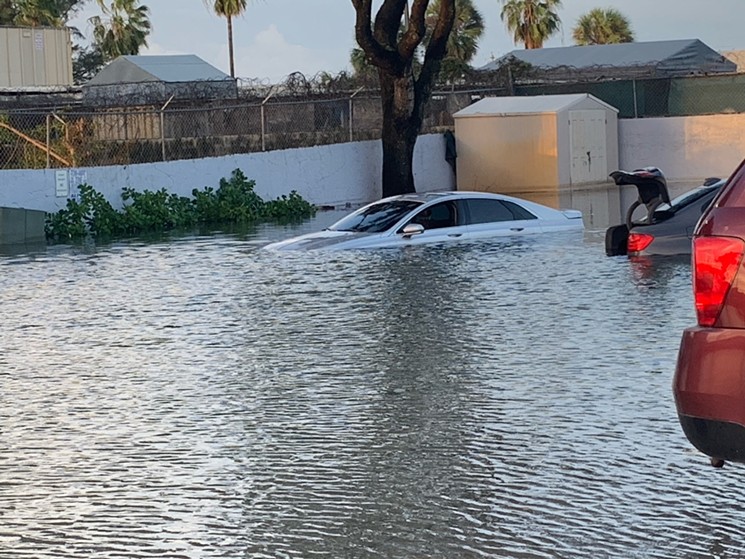 Flooding at Ingram Terrace after Tropical Storm Eta.
Courtesy photo
As it stands, it appears the county and the city have made amends. Michael Liu, director of the county's Department of Public Housing and Community Development, the agency that manages Ingram Terrace, tells New Times the jurisdictional issues have been cleared up and a newly obtained $500,000 federal grant will be used to rebuild the roadway.

"This is the responsibility of both the county and the city, and we are working together to try to resolve the situation now that we have the money," he says.

According to Airia Austin, the director of Opa-locka's public works department, construction should start in February 2021 and finish by May.

"When the roadway was initially constructed, drains were never part of the construction," Austin explains. "That's why the roadway is now impacted by all the [pot]holes you see."

But not all residents are hopeful. One woman who spoke with New Times says if her time at Ingram Terrace has proven anything, it's that the word of government officials can't be relied upon. She asked to remain anonymous because she worries about her lease being terminated.

"They're blowing smoke up your behind," she says. "They blow smoke up ours every time we call."

Reece has lived at Ingram Terrace for the past 20 years but says what happened last week was "the worst of the worst." Days after the tropical storm, she says, the water outside her apartment came up to her knees on her five-foot-two frame.

Like many of her neighbors, Reece has stayed because the rent is far cheaper than what she'd pay on the open market in one of the nation's least-affordable metro areas. But after Eta, she's thinking of moving out next year.

"I don't want to do this anymore," she says. "I'm over it."
KEEP MIAMI NEW TIMES FREE... Since we started Miami New Times, it has been defined as the free, independent voice of Miami, and we'd like to keep it that way. With local media under siege, it's more important than ever for us to rally support behind funding our local journalism. You can help by participating in our "I Support" program, allowing us to keep offering readers access to our incisive coverage of local news, food and culture with no paywalls.
Make a one-time donation today for as little as $1.