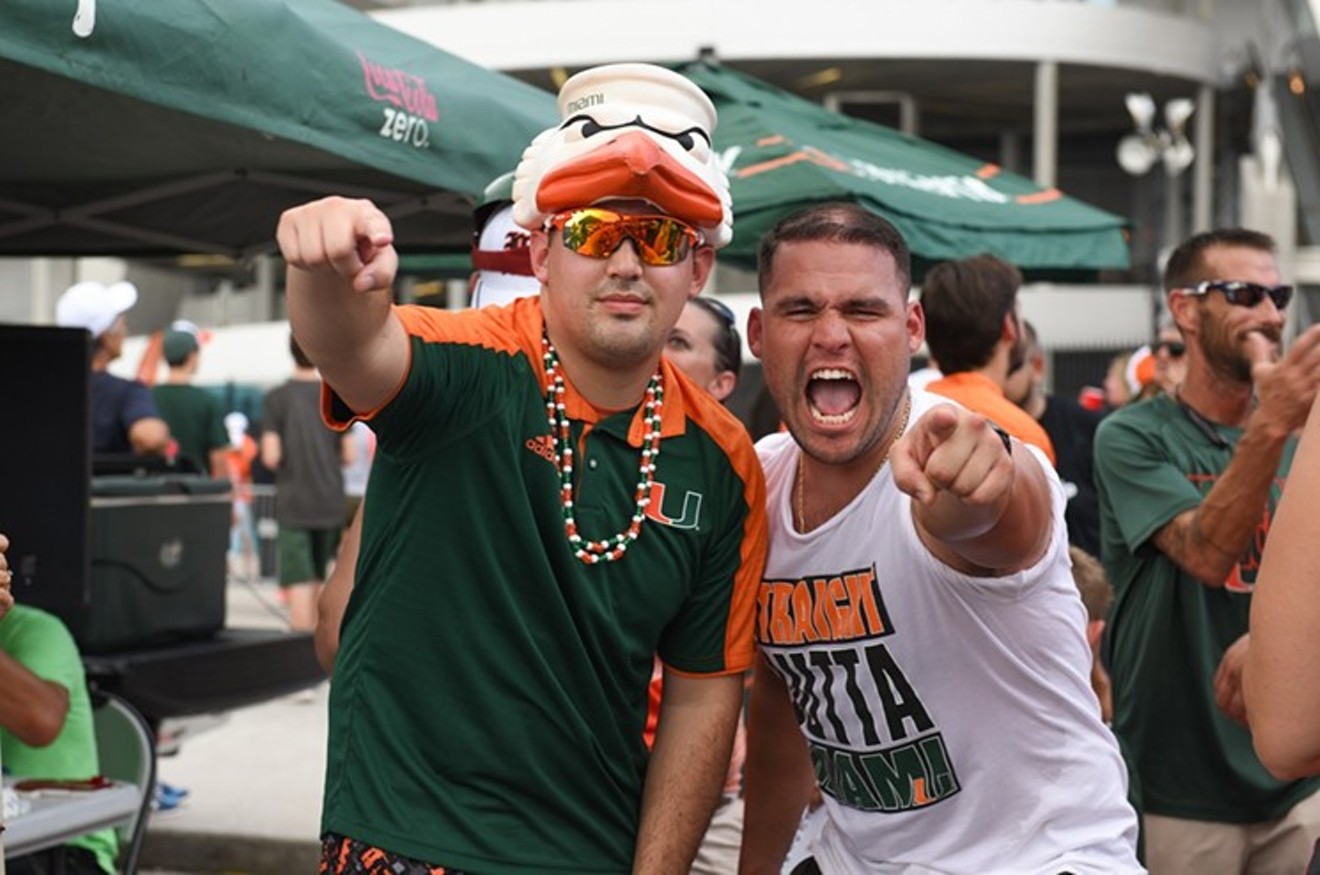 This season, make fun of yourselves. Photo by Christina Mendenhall
Football is back! Well, almost. Miami is so close to real, actual football games being played that we can almost smell the chicken wings and taste the lukewarm stadium beer.

This upcoming weekend marks the last of the year in which either the Miami Dolphins or Miami Hurricanes won't play an actual real-life game that counts. Next weekend, we're off to the races with the Hurricanes facing the Alabama Crimson Tide. Then the following weekend, the Dolphins travel to Foxboro to play the New England Patriots in Week One of the NFL slate.

Reunited and it feels so good. Oh, how we have missed you, football. Especially watching games in person.

What have we missed the most about Hard Rock Stadium? So many things that we've made a list.


Annnnd we’re back! Back on the field for tonight’s game between the Falcons and Dolphins. Kim Bokamper and I preview what’s to come in preseason game #2 at 6pm. @CBSMiami pic.twitter.com/QKkVeTQZju

The Coverage Before the Game

Sunday mornings during football season are a little slice of the holidays. It is said the NFL owns a day of the week, and it certainly feels like it.


Getting errands done by afternoon so you can get in front of a TV and watch the pregame coverage before heading out to the game (or watching from home) is a sport in itself.


The Feeling of Seeing Hard Rock Stadium Appear on I-95

Any Miami football fan will tell you the anticipation and then the eventual sighting of what is now Hard Rock Stadium still gives them butterflies. In all, its many shapes and sizes, before and post-renovation, the first glimpse of the mammoth structure on a Saturday or Sunday morning can instantly transport a 40-year-old man back to his childhood.

Driving past Hard Rock on a Tuesday is cool, but it's not the same as driving toward it on game day. There are few better feelings to experience as a Miami sports fan.


The #FF goes out to ALL @CanesFam EVERYWHERE It’s Our Year BELIEVE THAT!!! If 🙌🏻 See #CanesFam FOLLOW & FOLLOW BACK💯💯💯 #OnlyTheFam pic.twitter.com/iEpLPTWufU

Tailgating Before the Game

Ugh, how we've missed tailgating. Last season, it was limited. The hope is that this season, football tailgates are back to being a weekend tradition.


Delicious food crackling on the grill. People tossing a football around. Music playing. Lighthearted smack talk between opposing fans over an adult beverage. There isn't much like a good old-fashioned football tailgate.

Here’s a few clips I gathered at the Hard Rock Stadium yesterday.

It was great interacting with the fans and also seeing the team light it up live!#FinsUp pic.twitter.com/km3XCFkHKi

The Post-Tailgate Walk Into the Stadium

No matter how many Dolphins or Hurricanes games you've been to at Hard Rock, the trek into the stands will always conjure the vibes. By that time, you're probably feeling yourself. The tailgate got you right, and this walk puts you on top of the world.

Half the fun is deciding when to go into the stadium. Some people like to get in their seats earlier, to experience the pregame. Others like to time it so they can grab a stadium beer and snacks before just plopping their butt into their seats before kickoff. Whichever you prefer, the walk-in provides the same feeling of anticipation.

The Calm Before the Storm

Getting into a Hurricanes or Dolphins game is an entire ordeal. From getting everyone out of the house to tailgating to maneuvering your way through the entrances and through the concourse to your seats — it can be a project. But then...you're there. Football Disney World. Your brain needs a moment to adjust to its surroundings. Everything is so bright and vibrant.

The pregame feeling of first sitting in your seat before a game is one of the best that exists in sports.

When the Players Appear

Once you're in your seat and anticipating the kickoff, the biggest sign things are about to pick up is when the players start to roll out of the tunnel. That's when the party starts and the stands fill up. That's when the music gets louder and the buzz around the entire building increases.

Whether you're 7 years old or 77, the players walking out onto the field will always feel like a scene from Gladiator. It's akin to the previews getting underway before a movie begins in theaters.


It's on its way to watch the dolphins lose pic.twitter.com/LovwZFmknD

Things will go wrong for the Miami Dolphins this season. They always do. When that happens, nobody is better at dealing with the pain than a Dolphins fan. The losses are almost worth the laughs. Almost. Not quite.

When things go wrong this season, we'll be looking for the best tweets to lessen the pain.


The Victorious Exit From a Game

Unlike the agony of exiting Hard Rock Stadium after a loss, the ecstasy after a big Dolphins win leaves fans wishing the next game was sooner. There is something about leaving an NFL stadium after your team won. Maybe it's the fact that football games matter so much more than any other sport because there are so few of them. But the euphoria of a big win on Sunday can be felt until Tuesday.

We can't wait to walk out of Hard Rock Stadium after the Miami Dolphins win again. If all goes well, there will be plenty of opportunities this fall.


.@MiamiDolphins @Tua it always starts with qk identification and quicker feet! Always looks like he is in position to throw . When his mechanics are on TUA is ON. #BaldysBreakdowns pic.twitter.com/WkLO46Y46d

Obsessing Over the Highlights the Next Day

If there is anything NFL fans are exceptionally good at, it's rehashing what happened on the weekend, all week long. There really isn't anything else to do! The Miami Heat can play great or terrible, but nobody will remember it in three days because they'll have played twice since then. And don't even get us started on baseball. In the NFL, there are six days to break down everything that went right or wrong.


Obsessing over highlights and lowlights is what the NFL is all about. We can't wait to have something to talk about. Soon!

We missed you, football.
Photo by Christina Mendenhall

Being Together in a Positive Way Again

While COVID concerns are in no way in our rearview mirror, Miamians who are vaccinated are far more chill when attending live sporting events now than they did this time last year. That means we can envision enjoying a stress-free form of entertainment most of us grew up with since childhood.


We've missed being together over the last 18 months. In the best of all worlds, the Hurricanes and Dolphins seasons will bring us even closer, and both teams will succeed on the field. Even if they don't, it sure as hell will beat anything we dealt with last year.
KEEP MIAMI NEW TIMES FREE... Since we started Miami New Times, it has been defined as the free, independent voice of Miami, and we'd like to keep it that way. With local media under siege, it's more important than ever for us to rally support behind funding our local journalism. You can help by participating in our "I Support" program, allowing us to keep offering readers access to our incisive coverage of local news, food and culture with no paywalls.
Make a one-time donation today for as little as $1.