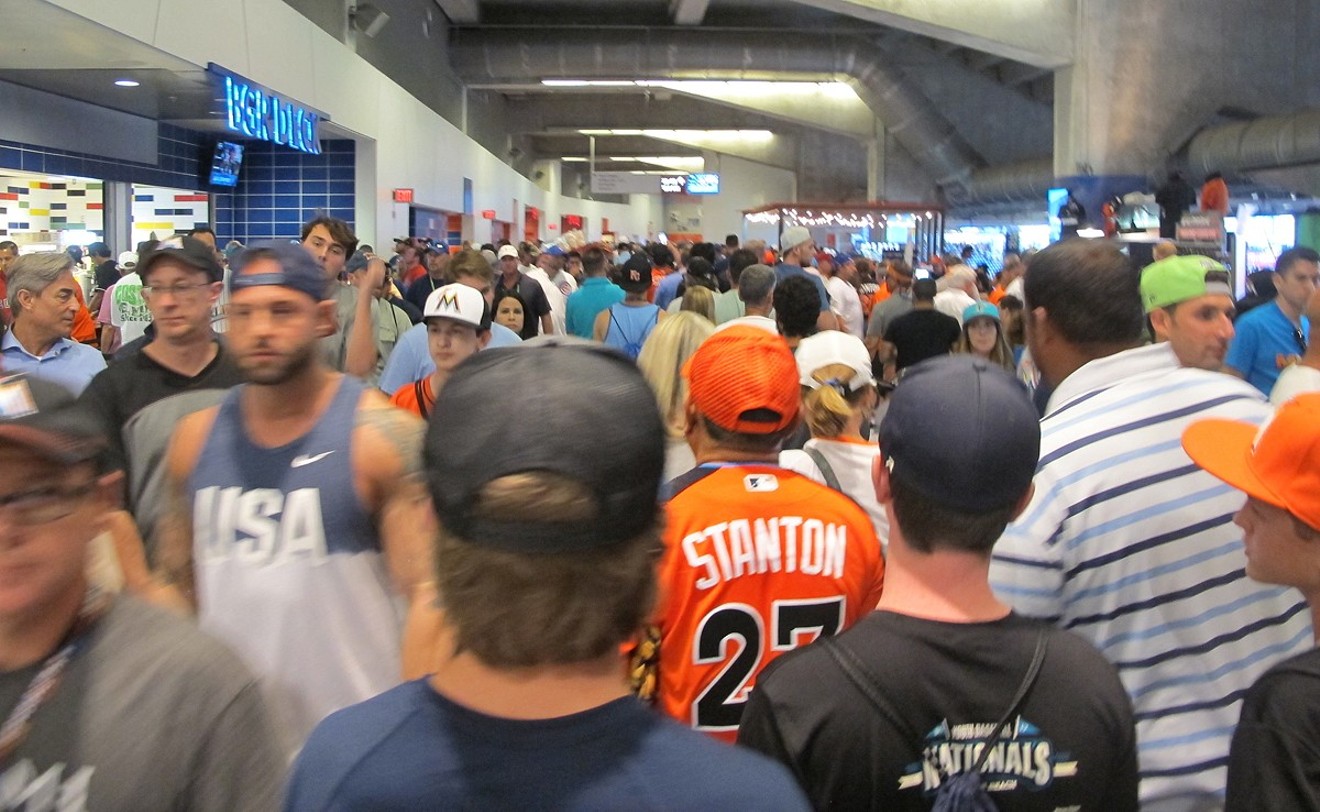 If you root for the Marlins, you probably work out. Photo by Tim Elfrink
If you've ever been to a Marlins game, you've surely heard someone in the stands say something like, "I could have caught that" or "I'm faster than that guy." It's practically required by law for sports fans to forget they would curl up in the fetal position if they ever found themselves inserted into a high-pressure situation in professional sports.

It's cool, though. Fans gonna fan, you know? They're obviously loud wrong: that fly ball would have bounced off their head and, as slow as any professional baseball player looks, he's likely faster than you, the guy in Section 123 eating nacho tots.

The good news? According to a new study, what may not be total bullcrap is the fact that Marlins fans will smoke most fellow MLB fans in a footrace or pushup contest because they're more fit than the average baseball fan.

US BETS, an online gambling website, recently surveyed 2,000 MLB fans to determine which fanbases are the most and least physically fit. The results found only five fanbases across the league are more fit than the Miami Marlins'. That's right: Marlins fans may be unable to hit a 90-mph fastball, but if a Peloton competition breaks out, they'll kick your entire ass.

US BETS determined the rankings based on several factors, including body mass index, frequency of exercise, daily physical activity, ability to run one mile, and the number of pushups and sit-ups a fan can perform. Marlins fans scored a collective sixth in the survey but were the second-most active in recreational sports, with 76 percent reporting that they play a recreational sport at least once per month.

The only fanbases deemed fitter than the Marlins' were fans of the Los Angeles Angels, Arizona Diamondbacks, Milwaukee Brewers, and Colorado Rockies. The Marlins' NL East rival, the Atlanta Braves, placed last on the list, so apparently all those tomahawk chop motions with their arms aren't keeping things tight enough.

So what have we learned here? If there happens to be some 75th NL East division tiebreaker that requires a Marlins fan to compete against a Philadelphia Phillies fan on American Ninja Warrior, you can safely print the championship shirts, baby!
KEEP MIAMI NEW TIMES FREE... Since we started Miami New Times, it has been defined as the free, independent voice of Miami, and we'd like to keep it that way. With local media under siege, it's more important than ever for us to rally support behind funding our local journalism. You can help by participating in our "I Support" program, allowing us to keep offering readers access to our incisive coverage of local news, food and culture with no paywalls.
Make a one-time donation today for as little as $1.