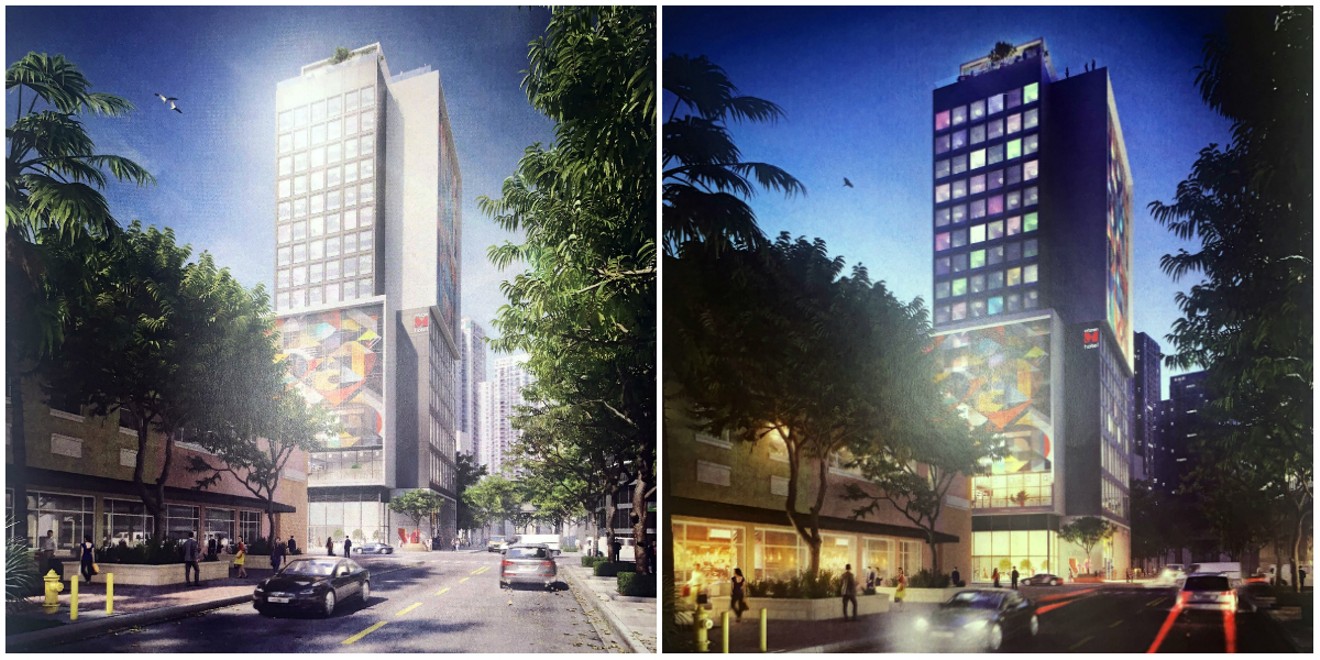 Visualizations of the midrise hotel during the day (left) and at night. Submitted by CitizenM to the City of Miami Planning & Zoning Department.
For most Brickell denizens, word of a new condo or hotel hardly turns heads anymore. Skyscrapers and midrise buildings have long become part of the scenery in the neighborhood after decades of intermittent construction booms transformed the once-sleepy residential area into a jutting skyline.

So when Miami historian Casey Piket passed a public notice about a new hotel on his way home from lunch at North Italia last week, he might have kept walking — this is Brickell, after all, where buildings seem to sprout up faster than trees. But trees were precisely the reason he stopped that day. The notice outlined city-approved plans to remove five large trees from the lot where the restaurant Perricone's once stood to make way for a modern midrise hotel.

The trees — three live oaks, one strangler fig, and one gumbo limbo — are to be removed because they "conflict with the footprint" of the hotel project. The notice gave only a few days to appeal the removal. Piket had never filed such an appeal before, but he had seen more trees chopped down in his 11 years as a Brickell resident than he could count.

"It's just one project, sure. But this has become standard procedure in Brickell, which is why our tree canopy is vanishing. It's completely different from when I moved in," says Piket, who filed an appeal before the July 8 deadline. The removal process will be put on hold while the appeal is addressed.

The soon-to-be hotel located at 955 S. Miami Ave. is a property of CitizenM, an Amsterdam-based chain looking to break into the Miami market. According to the notice, CitizenM will relocate the gumbo limbo and one live oak from the west side of the lot to other locations in Brickell. The strangler fig, which Piket estimates to be close to a century old, and the remaining two live oaks will get the ax. At least four other trees, including an oak adjacent to the sidewalk in front of the property, have already been uprooted. CitizenM will try to make up for the removals by planting five smaller trees on the street, according to public records reviewed by New Times.

Developers in the area often opt to replace older, larger shade trees with smaller ones, leaving the surrounding areas with far less cover from the sun. Even in cases where builders replant the same trees they chopped, it can take years for them to grow back.

"It's not a good trade. You need the shade to make the area walkable," says Eddie Raychaudhuri, a Brickell resident who works at a local law firm. Raychaudhuri moved to the area from Manhattan last year but says he'd been visiting Miami on work trips since 2005 and always made sure to stay in Brickell. "What I loved about Brickell was the combination of skyscrapers and greenery. It's disappointing that the canopy is disappearing."

Clockwise from top left: A strangler fig, a gumbo limbo and live oak, and the lot at 955 S. Miami Ave.
Courtesy of Casey Piket
The City of Miami has laws to protect trees, and on paper, those laws are pretty strong. Hefty fines for removing a tree without a permit are paired with a mandate that developers pay into a "Tree Trust Fund" to compensate for any tree they fell and fail to replace. However, vague language in the so-called tree ordinance allows developers to make a case for removing virtually any tree on the grounds that preserving them is not feasible. Developers can also appeal fines or contribution requirements to the Tree Trust Fund, taking their cases first before the Historic and Environmental Preservation Board and then, if they're not happy with the ruling, to the city commission. By the end of the process, the fine or contribution requirement is usually far lower than what it was originally. Rather than deterring developers from removing trees, the fines appear to be just another cost of doing business.

"It would be awesome to keep the bigger trees around while making room for new buildings, if there were a way to marry the two interests. But developers have more money," Raychaudhuri says.

Political will to protect trees is not uniform on the city commission. Commissioner Ken Russell of District 2, which includes Brickell and Coconut Grove, has been vocal about greater enforcement of the tree ordinance. On the other hand, there's Commissioner Manolo Reyes of District 4, who earlier this year was forced to withdraw a proposal to eliminate the ordinance after receiving significant backlash from locals.

Christine Rupp, executive director of the Dade Heritage Trust, says her organization has received an increasing number of calls about trees in the area over the years. "People feel pretty powerless, that the loss of trees is inevitable," Rupp says. "If any company can opt out of preserving old grove trees, there's not going to be any left in Miami."

Miriam Merino, a local real-estate agent and Brickell resident, is no stranger to the fight to preserve trees in her neighborhood. In 2013, Merino led protests against a plan backed by then-Commissioner Mark Sarnoff to cut down and replant as many as 70 trees on Brickell Avenue that had been identified as sick or a danger to passerby. Protesters argued they hadn't been looped in on the plan and said the city's consulting arborist had made mistakes when making an assessment. The plan eventually fizzled out.

Through the community Facebook page Brickell Watch - United to Preserve Nature, Merino tells residents about trees at risk. She says she plans on protesting the CitizenM tree plan and is keeping an eye on other projects being developed in the area.

Rupp says that without procedural change, preserving Brickell's tree canopy will continue to be a Sisyphean task.

"The approval process is backwards when it comes to the tree ordinance," she says. "They handle zoning, permits, and the layout first before going into the environmental plans. By the time it gets there, it's too late to change much. Because the process happens in that order, it leaves few options for the trees."
KEEP MIAMI NEW TIMES FREE... Since we started Miami New Times, it has been defined as the free, independent voice of Miami, and we'd like to keep it that way. With local media under siege, it's more important than ever for us to rally support behind funding our local journalism. You can help by participating in our "I Support" program, allowing us to keep offering readers access to our incisive coverage of local news, food and culture with no paywalls.
Make a one-time donation today for as little as $1.