Bat Conservation International, the Tropical Audubon Society, and local resident Jose F. Barros filed the case against Miami-Dade County on October 4. They allege that by allowing construction of a water park in the Zoo Miami parking lot, the county violated a 2006 referendum in which a majority of voters acquiesced to further development around the zoo only if the land was not "environmentally sensitive."

The plaintiffs assert that the parking lot construction site is environmentally sensitive owing to the presence of endangered Florida bonneted bats, which use the lot as a foraging area to find food.

It's a wild idea that has conservationists going rabid in court: a water park in the parking lot of Zoo Miami in South Dade, smack dab in the middle of a critically endangered forest.

The Miami Wilds Water Park is an amusement project whose origins date back to a 2006 dream of a 20th Century Fox theme park, billed as a way to revitalize the South Dade economy by creating hundreds of jobs and making the area a tourist attraction.

But the project has drawn the ire of conservationists for years for its potentially deadly impact on a set of endangered species that forage and socialize in the area.

"It's a parking lot in the middle of the endangered pine rocklands. Any development may harm endangered species like the Florida bonneted bats, Bartram's scrub-hairstreak butterflies, and the Miami tiger beetles," Elise Bennett, Florida director for the Center for Biological Diversity, tells New Times.

While the developers say they'll take the animals into account and use environmentally-sensitive lighting and construction, nonprofit groups like the center and Bat Conservation International (BCI) argue that no amount of environmental mitigation efforts can protect the animals in this area, and the project should just be moved somewhere else.

The Miami-Dade County Board of County Commissioners entered into a lease agreement with the park operator, Miami Wilds LLC, in June 2022, despite intense outcry from animal advocates.

Now, the controversial project has invited a bevy of legal claims aimed at the National Park Service and the U.S. Fish and Wildlife Service for allegedly failing to protect the wildlife.

"We're trying to learn what we can as to why these agencies are violating the Endangered Species Act. We intend to enforce the law," Bennett says. 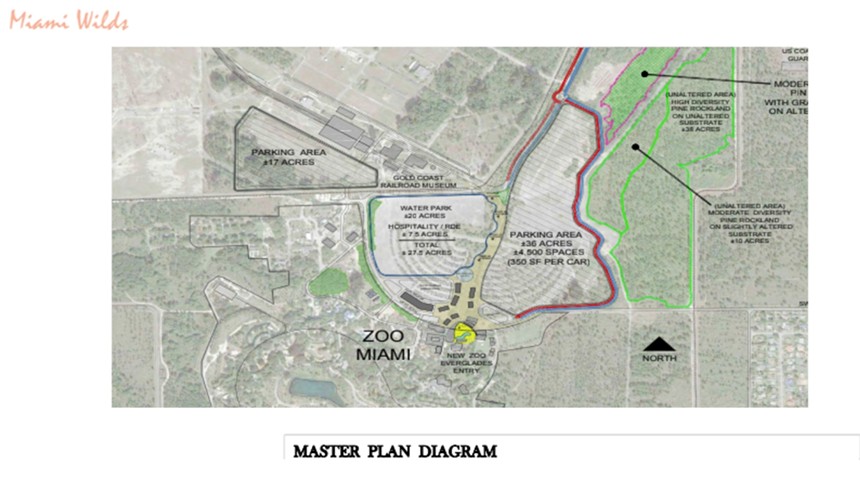 Layout of the planned Miami Wilds Water Park, set to be constructed in the parking lot of Zoo Miami.
Image by Miami Wilds, LLC


The first lawsuit, filed in July by the Center for Biological Diversity, the Tropical Audubon Society, Miami Blue Chapter of the North, and the American Butterfly Association centers on the Florida bonneted bat.

The bat is only native to South Florida, and much of its habitat has been destroyed by development and the state's swelling population. Bat experts with BCI say places like the Zoo Miami parking lot are ideal spots for the creatures to look for food because it is a large, dark, open space at night. Any kind of lighting and development in that space will imperil the bats by disrupting their ability to feed themselves, environmentalists argue.

According to the nonprofits' complaint against U.S. Fish and Wildlife Service in the U.S. Southern District of Florida, the agency was supposed to designate a critical habitat area for the bat last June, as required by the Endangered Species Act (ESA), but hasn't done so. The designation would afford greater protections for the species and discourage development in the area they inhabit.

"The Service was required to submit a final designation of critical habitat for the Florida bonneted bat within a year of the proposed rule, by June 10, 2021, but it has yet to do so. Consequently, the Service has and continues to be in violation of the ESA," the complaint reads.

In August, BCI joined the Center for Biological Diversity, Tropical Audubon, and Miami Blue in sending the agencies an intent-to-sue letter against the National Park Service. The groups take issue with the agency for allegedly signing off on land-use changes for the park without first ensuring that the project won’t adversely affect endangered animals.

"It’s shocking that the Park Service plowed ahead knowing the project is likely to hurt endangered species like the Florida bonneted bat," said Bennett wrote in an August release. "The agency has a legal duty to ensure its actions won’t drive species toward extinction, and it has to do this before taking action. This is a critical failure." 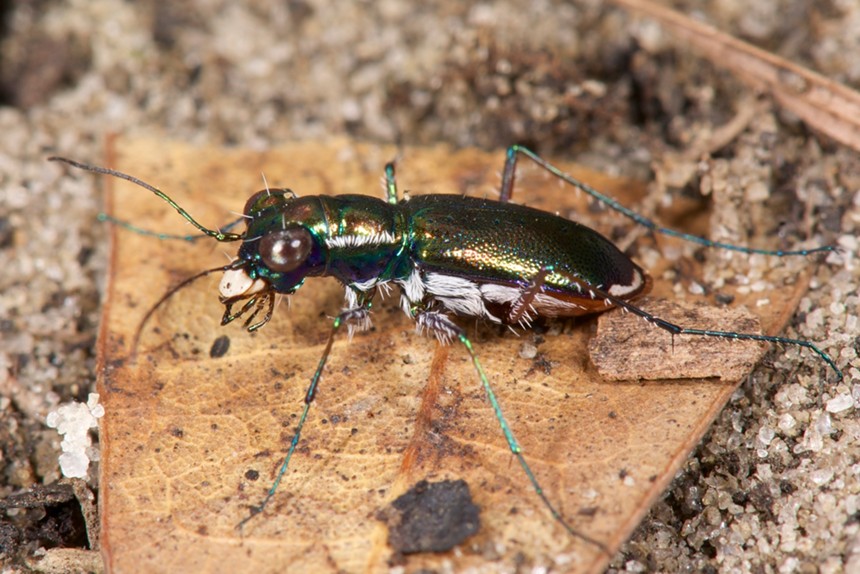 The Miami tiger beetle is native only to the endangered pine rocklands forest in Miami-Dade County.
Photo by Jonathan Mays via Florida Fish and Wildlife Conservation Commission
The Endangered Species Act requires that plaintiffs give a government agency 60-day notice before filing suit.

Most recently, the Center for Biological Diversity notified the U.S. Department of the Interior in September of their intent to sue U.S. Fish and Wildlife for the agency's alleged failure to designate a critical habitat for the Miami tiger beetle.

The shiny green beetles are only found in the pine rockland forest in Miami-Dade County, a habitat that is gradually disappearing. They were listed as endangered in 2016, and U.S. Fish and Wildlife Service offered a proposed critical habitat for the critter in September 2021, but has not issued a final designation more than a year later.

Bennett tells New Times that her group has not heard back from the National Park Service or U.S. Fish and Wildlife regarding the August intent-to-sue letter. If the agencies don’t resolve the legal claims by October 21, the Center for Biological Diversity is free to move forward with a lawsuit.

Paul Lambert, a manager of Miami Wilds LLC, says the company has 36 months to complete the project under their lease with the county, and they are conducting acoustic surveys to determine what effect the project will have on the endangered bonneted bats. He says they have committed to not moving forward with building until the National Park Service (NPS) issues an official opinion on the impacts to the species.

"We are not going to start construction until we have the biological opinion from NPS. Nothing will happen until that process is underway," Lambert tells New Times. "These lawsuits seem premature."

Asked if the project will halt if the National Park Service says the area is critical for the bats, Lambert says the company will look for ways to dampen the impact, such as shutting off lights at a certain time.

"It's too early to say exactly what we're gonna do," he asserts.

The Department of Justice, which represents the National Park Service and U.S. Fish and Wildlife in legal matters, declined to comment on pending litigation when reached by New Times via email on Friday.

The developer's next step is to submit a site plan for the project to the county within the next few months.

Correction published 10/5/2022: The original version of this story erroneously stated that the Miami-Dade County commission approved the lease between the county and Miami Wilds LLC this year. The commission in fact approved the lease in 2020. The lease went into effect in June 2022.
KEEP MIAMI NEW TIMES FREE... Since we started Miami New Times, it has been defined as the free, independent voice of Miami, and we'd like to keep it that way. With local media under siege, it's more important than ever for us to rally support behind funding our local journalism. You can help by participating in our "I Support" program, allowing us to keep offering readers access to our incisive coverage of local news, food and culture with no paywalls.
Make a one-time donation today for as little as $1.