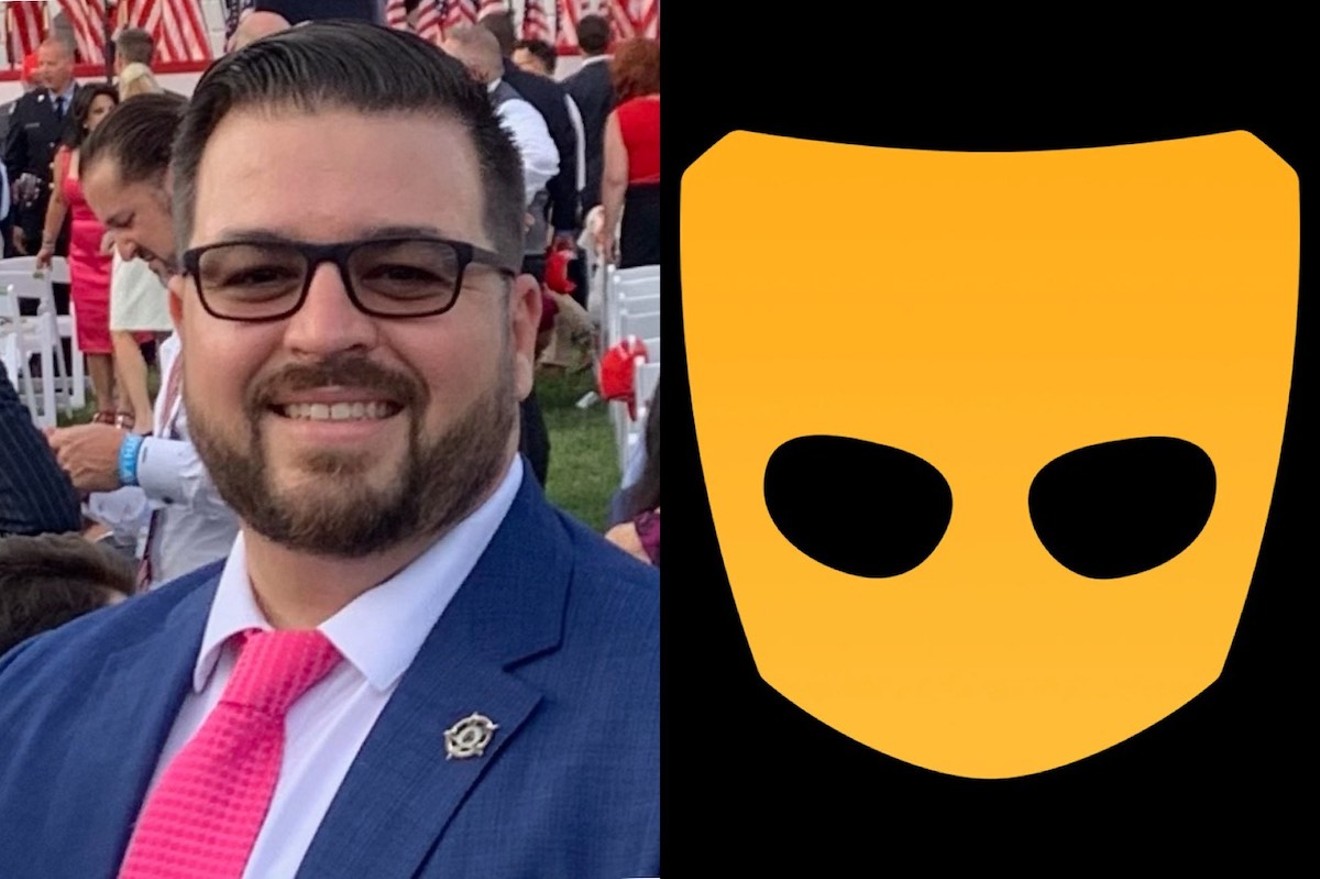 Miami Police Sgt. Tommy Reyes pulled a gun on his Grindr date after the man allegedly stole Reyes' wallet. Photo courtesy of Tommy Reyes, screenshot via Grindr
One of Miami's most influential police sergeants was suspended last month following a previously unreported incident in Tallahassee involving a man he met on a dating app, New Times has learned.

According to a January 11 Tallahassee Police Department (TPD) report obtained by New Times, Miami Police Department Sgt. Tommy Reyes, who is president of Miami's Fraternal Order of Police (FOP) union and openly gay, was nearly charged with aggravated assault with a deadly weapon after pulling a gun on his Grindr date after the man allegedly stole Reyes' wallet.

Although police were dispatched to a reported robbery, TPD officers later established probable cause to charge Reyes. On February 17, Reyes was relieved of duty with pay pending MPD's ongoing internal affairs investigation into the incident.

"I was a victim and I have nothing to hide but I cannot comment on an open investigation," Reyes tells New Times. "I was a victim of a crime, and Tallahassee PD victimized me again."

A TPD public information officer declined to comment on the case to New Times on Monday.

Reyes has led the local FOP chapter, which bargains with the City of Miami for union contracts for its police members, since 2018.

In an email to members of the Miami FOP last month, Reyes wrote that his suspension came after a complaint from an anonymous party.

"I was [relieved of duty] based on an anonymous complaint," he wrote. "I cannot go into details as it is an open investigation, I will stand strong and tell you my brothers and sisters that I was the victim of a crime, and I am once again being victimized by some of our own people."


"I was a victim of a crime, and Tallahassee PD victimized me again." — Sgt. Tommy Reyes, Miami FOP president

The police report details a violent altercation between Reyes, who's 36, and his date, a "young Hispanic male," at a Hampton Inn & Suites hotel while Reyes was visiting Tallahassee in January. The report is heavily redacted to withhold the names of Reyes and his date. But Reyes confirmed to New Times that he is the other party in the report.

According to the report, the date met Reyes at the hotel "anon," meaning he entered the room while Reyes was turned around to not reveal his face, and that their sexual encounter went poorly. The date told TPD officers he pretended to ejaculate by spitting on Reyes' back and took Reyes' wallet before leaving because he was afraid Reyes would "mess with him."

Reyes told TPD officers that when the date saw Reyes' MPD badge and law enforcement credentials inside the wallet, the date began to send him messages on Grindr in an attempt to "blackmail" him.

The date told police Reyes had agreed to let him go on a "shopping spree" if he returned the wallet.

Reyes said he did no such thing, and that the date purchased several items from a Best Buy in Tallahassee using his American Express card without his permission, including computer gaming accessories and a $10 donation to St. Jude Children's Research Hospital. The tab came out to $1,310.71.

According to the police report, the two men met up later that day to exchange the wallet at the Hampton Inn parking lot. While they were sitting inside the date's car, the date later told police, he asked Reyes to empty his pockets to reveal any weapons he might have been carrying, at which point Reyes allegedly emptied his pockets and reached over from the front passenger seat to remove the keys from the ignition. The date told police he was confused by this and reminded Reyes that he still had his wallet and that Reyes allegedly quipped, "And I've got a gun."

Reyes' and the date's accounts to TPD officers agreed that Reyes retrieved a concealed gun and pointed it at the date, whereupon the two exited the vehicle and Reyes kept the weapon trained on him and ordered him to the ground.

It's unclear at which point during the altercation TPD was dispatched. Reyes told officers he did not issue any law enforcement commands or attempt to make an arrest — an action prohibited outside of his jurisdiction — but intended to detain the date until TPD arrived.

According to the report, TPD officers examined security footage from the hotel, which shows Reyes pointing a gun at a young man and grabbing his arm before cutting out to then show the man fleeing the parking lot. The date told TPD officers that Reyes put his knee on his back and yelled, "I should fucking kill you," before he was able to get free and run to a nearby gas station.

By the time TPD officers met Reyes in the hotel parking lot, the date was gone, but officers looked up the owner of the vehicle, who was the date's mother. She told officers on the phone that she could persuade her son to meet with them at Florida A&M University (FAMU) police department, where he later gave a sworn statement.

The date showed officers injuries he allegedly received from Reyes: "scrapes" on his left knee and elbow, "cuts," "possible bruising," and a "wound on the back of his head which was red and had dried blood on it" where hair was also missing.

Because Reyes blocked the date on Grindr, their conversation disappeared and the date was unable to show officers their messages.

Reyes provided the messages to a TPD investigator, who reviewed them on January 19 and determined that the date was attempting to "extort/blackmail" Reyes if he did not take him on a "shopping spree."

TPD officer Eric Scarbrough wrote that Reyes was initially the victim of petit theft, but because he drew his weapon on the man and pinned him to the ground, there was probable cause to charge him with aggravated assault with a deadly weapon without intent to kill — a third-degree felony.

The case was forwarded to the Tallahassee-Leon County State Attorney's Office, which declined to bring charges owing to "no reasonable likelihood of prosecution." Reyes' case was closed and deemed "exceptionally cleared."

Reyes remains relieved of duty with pay pending MPD's investigation.
KEEP MIAMI NEW TIMES FREE... Since we started Miami New Times, it has been defined as the free, independent voice of Miami, and we'd like to keep it that way. With local media under siege, it's more important than ever for us to rally support behind funding our local journalism. You can help by participating in our "I Support" program, allowing us to keep offering readers access to our incisive coverage of local news, food and culture with no paywalls.
Make a one-time donation today for as little as $1.