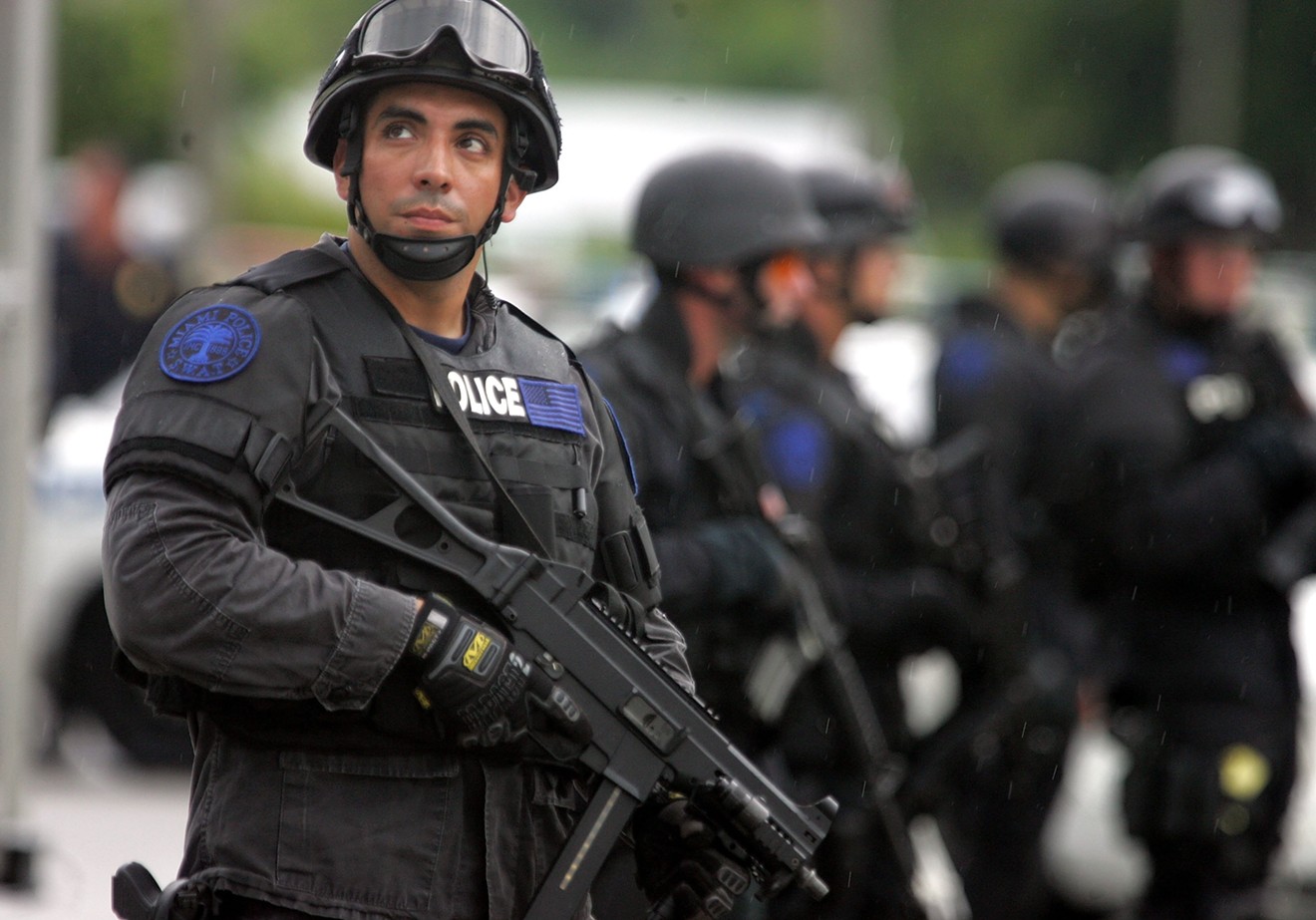 Weeks after the June 2016 Pulse nightclub shooting in Orlando, the MPD put in a request to rush-order $300,000 worth of military-grade armor. The department sought another $100,000 for assault rifles, rifle scopes, and related equipment the following month. In 2019, the police force asked for $70,000 to spend on powerful phone-spying tech for use in criminal investigations.

According to an agenda for the City of Miami's upcoming September 8 commission meeting, MPD is now seeking nearly $37,000 to arm its SWAT officers with five new long-range sniper rifles and accessories, noting that the current weapons are more than 15 years old and in need of replacement. The new military-style weapons cost about $7,400 apiece.

"The procurement of the new rifles will enhance the defensive and offensive capabilities of MPD SWAT, thereby enhancing the protection provided to City of Miami residents," the resolution reads.

An MPD spokesperson did not immediately respond to an email from New Times about the request. The Miami City Commission will likely vote on the purchase during Thursday's meeting.

The department proposes to buy the rifles from Colorado-based company Mile High Shooting Inc. City Manager Arthur Noriega recommended waiving competitive bidding after the city determined that Mile High was the exclusive distributor for the rifles.

The Miami Police Department wants nearly $37,000 to purchase five of these sniper rifles.
Screenshot via Mile High Shooting
If the purchase is approved, the guns will be used by an MPD SWAT team's sniper crew whose members specialize in long-range surveillance and precision shooting. The snipers are trained to respond to mass-casualty incidents, conflicts involving barricaded suspects, hostage situations, and high-risk warrant service.

According to the resolution, "The new rifles operate on the same performance platform as SWAT’s existing rifles and would allow for a seamless transition, enhancing safety, consistency of performance and readiness in the high-liability environment SWAT’s Officers operate within."

Shooting incidents involving Florida police departments' snipers have been relatively uncommon in recent years, in part owing to the limited circumstances in which police snipers are deployed.

In May 2017, a sniper with the Jacksonville Sheriff's Office fatally shot 25-year-old Terry Campbell, who was holed up in an apartment after allegedly threatening his brother with a handgun. Earlier in the standoff, the man had fired multiple shots when police tried to enter the apartment, according to a News4Jax report. The sniper fired the fatal shot upon spotting Campbell in a window with a gun raised, according to the sheriff's office.

A Pinellas Park SWAT team sniper shot and wounded a man in July 2019 after a long standoff tied to a purported domestic dispute. The man threatened police and brandished a firearm at them before the sniper opened fire, according to Pinellas Park Police.

Like many police departments in large cities across the nation, the MPD is equipped with an extensive cache of military-grade equipment and vehicles.

The militarization of police nationwide since the 1990s has been attributed in large part to the federal 1033 Program, in which local law enforcement can obtain excess military equipment and tactical vehicles from the U.S. Department of Defense. (Miami's potential purchase of the new sniper rifles is not tied to the 1033 Program.)

A 2017 study found that heavy militarization of a police department, as measured by equipment transfers under the 1033 Program, correlated with a higher rate of fatalities from officer-involved shootings. The study authors told the Washington Post that heavily militarized police departments "use more military language, create elite units like SWAT teams, and become more likely to jump into high-risk situations."
KEEP MIAMI NEW TIMES FREE... Since we started Miami New Times, it has been defined as the free, independent voice of Miami, and we'd like to keep it that way. With local media under siege, it's more important than ever for us to rally support behind funding our local journalism. You can help by participating in our "I Support" program, allowing us to keep offering readers access to our incisive coverage of local news, food and culture with no paywalls.
Make a one-time donation today for as little as $1.