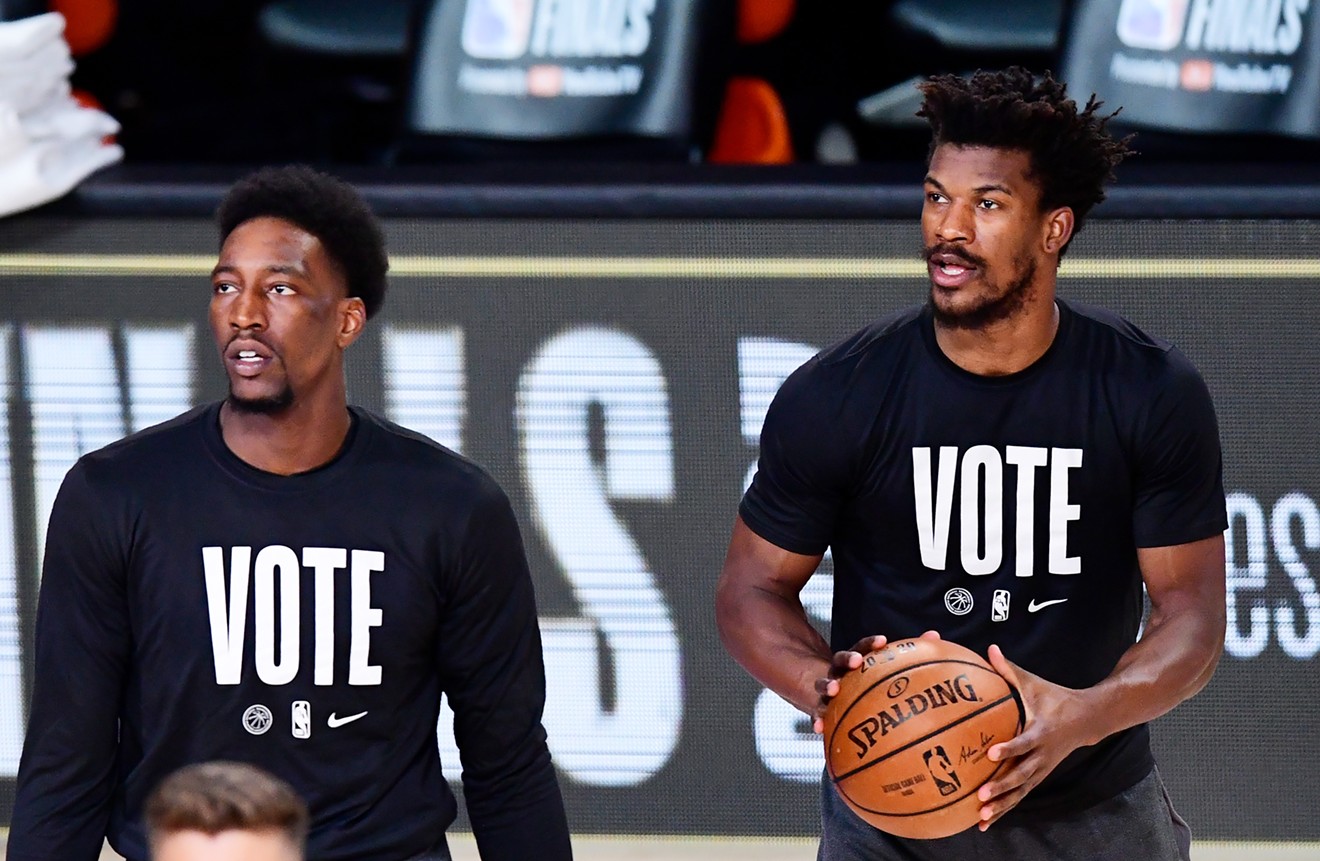 The Miami Heat managed to bring us some entertainment, joy, and much-needed normalcy. Photo by Douglas P. DeFelice/Getty
They say all good things must come to an end, and the Miami Heat's improbable 2020 championship run is no exception. A season that began with a preseason win against the San Antonio Spurs on October 9, 2019, ended in a coronavirus-secure bubble in Orlando on October 11, 2020, with a 106-93 loss to the Los Angeles Lakers in Game 6 of the NBA Finals.

Somehow, all we can feel is thankful, though. Thankful it happened. Thankful for this team, and how they represent Miami.

All hail the King. pic.twitter.com/V15dRf9IuT

Heat fans are definitely in their feelings this morning. While disappointment is at the forefront, appreciation for what the team has brought into our living rooms for the last three-plus months can't be overlooked. An NBA playoff experience that will never be duplicated unexpectedly led to some of the greatest memories in Miami sports history.

For that, we're so incredibly thankful. We needed that, Miami Heat. Thank you.

An overlooked and overmatched Heat team came within two victories of their fourth franchise championship. From unforgettable performances by Jimmy Butler in his first season in Miami to gutsy play from 20-year-old rookie Tyler Herro, the past three months have brought moments into our lives that will live on forever, championship parade or no.


Erik Spoelstra wiping away tears for over 30 seconds before starting his first answer post-game. pic.twitter.com/japm0ctsht

Heat players, coaches, and staff spent months away from their families for our entertainment and their love of the game. They made the worst year of their lives even worse, all in the name of the game.

For that, we thank you, Miami Heat.

With life falling apart all around us, the Miami Heat gave its fans months of nights to look forward to. The team gave us more to talk about than presidential elections or rising death tolls.

When the season was halted after the world was introduced to the coronavirus, it would have seemed unimaginable that Heat fans would sit here in October, disappointed about a Game 6 NBA Finals loss. But here we are, disappointed to be a runner-up and sad to see a season end that was expected to wrap up so many months ago.

It would be so easy to be negative today. It would be even easier to feel depressed. But in the grand scheme of things, Heat fans must be incredibly thankful for the effort the team gave, and more importantly, for the distraction the team gave us all during a time we needed it the most.

The year 2020 has been a complete and utter shitshow from top to bottom. But the Miami Heat managed to bring us some entertainment, joy, and much-needed normalcy amid the mess.

Thank you, Miami Heat. We needed that.
KEEP MIAMI NEW TIMES FREE... Since we started Miami New Times, it has been defined as the free, independent voice of Miami, and we'd like to keep it that way. With local media under siege, it's more important than ever for us to rally support behind funding our local journalism. You can help by participating in our "I Support" program, allowing us to keep offering readers access to our incisive coverage of local news, food and culture with no paywalls.
Make a one-time donation today for as little as $1.