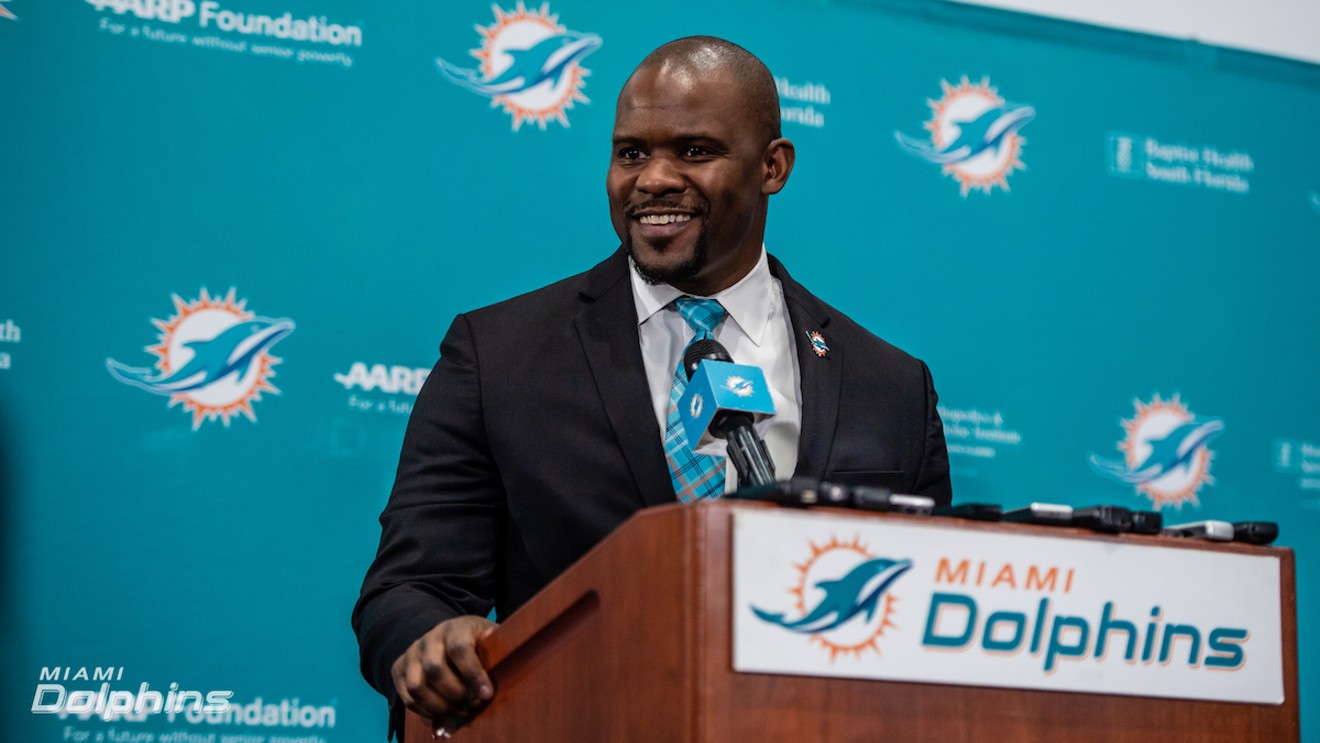 The heat is on for the Dolphins' new head coach, Brian Flores. Miami Dolphins
Last Thursday, fans got their first taste of what's being billed as a bona fide Miami Dolphins quarterback competition. Before that day, the only indications had been media tweets and a handful of practices open to the public. In Thursday's 34-27 win against the Atlanta Falcons, a few things came to light as Ryan Fitzpatrick and Josh Rosen battled to snatch the starter job.

Fitzpatrick versus Rosen — two men enter, but only one can leave with the coveted label of starting quarterback for a team most observers predict will finish last in the AFC East, if not the entire NFL. It's a coveted honor, really.

The results from Round 1 of the QB fight were as follows: Fitzpatrick, 2-5 for 20 yards; Rosen, 13-20, 191 yards, and one horrendous-looking interception. Neither line screams, "That's our guy!" Though Rosen had more opportunities than Fitzpatrick, it's likely because the Dolphins have plenty of feel for the skills of the 37-year-old quarterback and would rather spend more time finding out about Rosen, for whom the team just traded a second-round pick this offseason, one that precedes one of the greatest NFL quarterback drafts ever in 2020.

That fact, and so much more, is why Rosen should open the game as the starter against the Tampa Bay Bucs this Friday night. The front office, coaching staff, media, and fans would all get so much more out of seeing what the second-year player can do with the starters than anyone would by watching Fitzpatrick try to prove he has one good year left in his arm. The Dolphins owe it to themselves to play Rosen with the starts ASAP.
The Dolphins are invested in Rosen while having zero connection to or investment in Fitzpatrick. This season is expected to be a wash, with the team having little chance to compete in the Super Bowl. There is absolutely no reason to waste another day giving first-team reps to a quarterback that will be long retired and on a boat fishing somewhere the next time the Dolphins are a title-contending team.

Fitzpatrick showed more of who he is in Thursday's game — nice scrambles, some Houdini-like plays, and an arm that leaves much to be desired. After a little more play from him, an amazing touchdown pass and a horrendous pair of interceptions surely would've followed. That's who Fitzpatrick has proven to be in his career.

Rosen needs more confidence — confidence that being entrusted with the starting spot in Miami would provide. After a bad rookie season in Arizona, one that saw him get battered behind one of the worst offensive lines in NFL history, sitting on the bench in Miami behind Fitzpatrick would be just another sign that his career was off to a bad start and maybe would never pan out the way he envisioned it when he was a highly sought-after player at UCLA.

Head coach Brian Flores and the Dolphins should let Rosen begin failing now if he's going to fail. They signed up for a tryout with him. There's no reason to wait until the regular season to see what he can do with the starters. This Friday, Rosen should take the field the first time the Dolphins' offense lines up. Anything else would be a waste of time.
KEEP MIAMI NEW TIMES FREE... Since we started Miami New Times, it has been defined as the free, independent voice of Miami, and we'd like to keep it that way. With local media under siege, it's more important than ever for us to rally support behind funding our local journalism. You can help by participating in our "I Support" program, allowing us to keep offering readers access to our incisive coverage of local news, food and culture with no paywalls.
Make a one-time donation today for as little as $1.