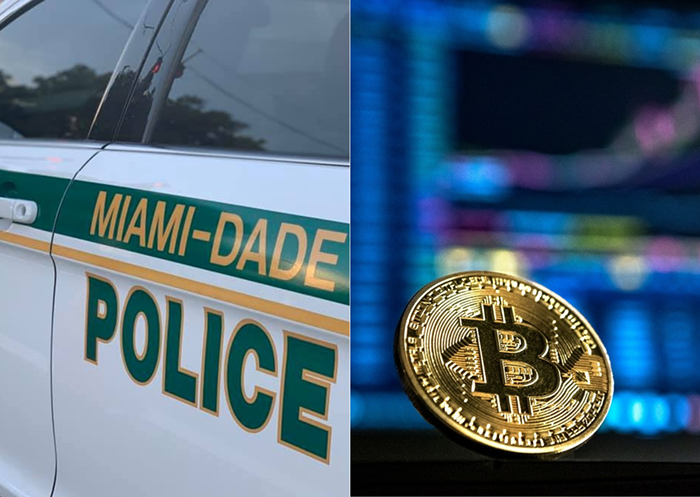 Photos by Miami-Dade Police and André François McKenzie/Unsplash
In the midst of renewed calls for police oversight and accountability last August, Miami-Dade County commissioners voted to revive a once-defunded civilian police oversight panel — a body made of non-government employees who would investigate allegations of police misconduct and excessive force from the public and act as an independent watchdog on the Miami-Dade County Police Department (MDPD).

The original incarnation of the panel, known then as the Independent Review Panel (IRP), was disbanded in 2009 after the economic recession, and in the years since, social-justice advocates have called for the panel's reinstatement. Even though the panel was revived by ordinance as the Independent Civilian Panel (ICP) last August, it hasn't been able to get off the ground for nearly a year, as the appointment process for selecting panel members has been mired with red tape and procedure.

While the county has slow-walked the formation of the police oversight board, commissioners have had no problem fast-tracking another endeavor: Miami-Dade's cryptocurrency task force, a body that will research how to allow county residents to pay for government services using digital money.

Both groups need members that must be appointed by Miami-Dade's 13 county commissioners. The task force that will examine possible uses of cryptocurrency in Miami-Dade only requires a simple quorum in order to convene. Commissioners were able to appoint seven of the 13 members in the two months since they approved the creation of the task force, meaning the group is ready to meet and officially conduct business.


There are far more membership requirements for the long-awaited ICP, which has not yet held its first meeting more than ten months after commissioners approved it. Because the panel will have the power to investigate police conduct, subpoena evidence, and issue recommendations for changes in police procedures, the process to get it off the ground is more stringent. For starters, all 13 members must be appointed and confirmed before the group can meet.

Commissioners approved an ordinance to reinstate the previously defunded IRP back in August, during a summer of intense calls for more police oversight and accountability after the killings of George Floyd in Minneapolis and Breonna Taylor in Louisville.

But by April, only seven members had been appointed to the panel, and some commissioners lamented the red tape that had stalled the nomination process.

Two months later, the ICP still doesn't have a full list of nominees. Twelve out of 13 county commissioners have nominated members. Commissioner Raquel Regalado of District 7's office tells New Times the commissioner has a candidate in mind but the person is being subjected to a background check before she officially makes her appointment.

Ten of those 12 nominees have been confirmed by the county commission as a whole, but the remaining two still have to be sworn in.

Another wrench slowing down the process involves the professions of the nominees.


The panel can only have two people from the same (or similar) professional background. If more than two people with the same job are selected, then the county's Office of Community Advocacy must randomly select two of those applicants.

Four of the current nominees are attorneys, which makes two of them ineligible. Commissioners are not allowed to conduct official business together outside of public meetings under Florida's sunshine law, so they cannot coordinate their appointments to avoid those snafus.

Commissioners will discuss possible solutions to that issue at a July 15 committee meeting. An amendment sponsored by Commissioner Sally Heyman would make it so the first two people appointed chronologically from the same profession would serve on the panel. The commissioners who selected the subsequent people would have to make new nominations.

Advocates of police accountability are disappointed with the snail's pace at which nominees are being named, especially given the decade-plus they've spent fighting to bring it back, battling opposition from the police union and some county leaders.

Although the rule about professional backgrounds was well-intentioned, the myriad requirements have bogged down the process, says Jeanne Baker, chair of the police practices committee for Miami's chapter of the American Civil Liberties Union.

"For good reasons, the ordinance included requirements for who should serve as panelists on the ICP. But an unintended consequence of those requirements is that the process of selecting the panelists has been extremely slow," Baker tells New Times via email. "We are disappointed that the ICP is not yet up and running. It will be a crucial institution to help bridge the divide between the community and the police. There is no time to waste in doing this."


Say it louder @doug_hanks. Yet, we are working to change an established system, change will always be slow. But, we persist. 😤 https://t.co/oeSJLJ7Ioq

Rodney Jacobs, assistant director of the City of Miami's own police watchdog group, the Civilian Investigative Panel, tells New Times it's important for the county commission to move faster to confirm the panel and begin the work of digging into police misconduct.

"Time is of the essence to get the people appointed and empaneled," Jacobs says. "The longer we wait, the longer we thwart the will of the people, because it's been almost a year since it was approved. The commission should take a more vested interest in doing this as expeditiously as possible."
KEEP MIAMI NEW TIMES FREE... Since we started Miami New Times, it has been defined as the free, independent voice of Miami, and we'd like to keep it that way. With local media under siege, it's more important than ever for us to rally support behind funding our local journalism. You can help by participating in our "I Support" program, allowing us to keep offering readers access to our incisive coverage of local news, food and culture with no paywalls.
Make a one-time donation today for as little as $1.