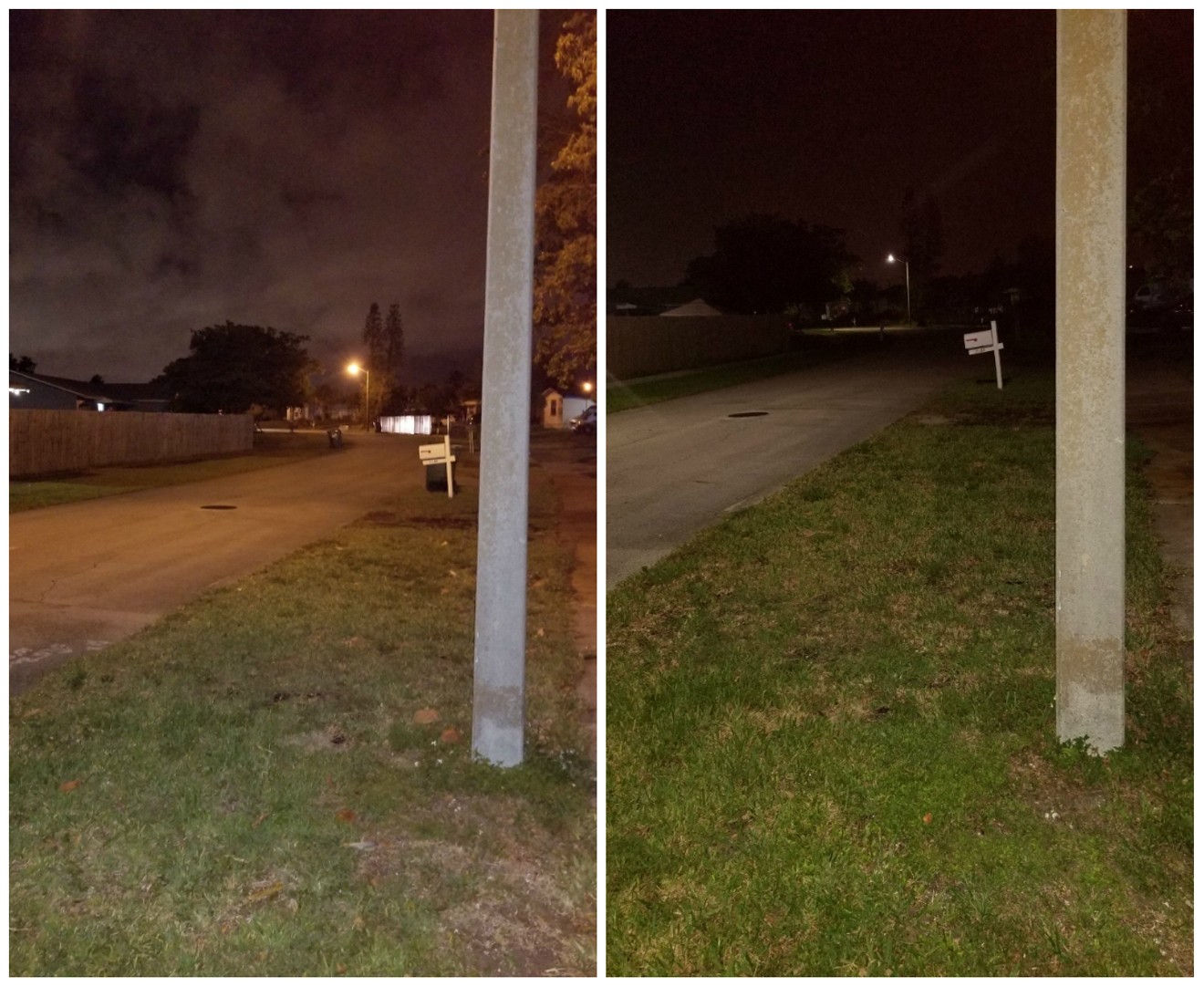 Before LED installation (left) and after (right). Light poles are about 300 feet apart. Colonial / Fairway Estates Civic Association
A recent pool party in southwest Miami-Dade County was cut short by the sound of gunshots, as attendees trampled over each other in a rush to find cover. Miraculously, no one was hit. One county official has blamed the shooting, which remains under investigation, on an unlikely source: LED light bulbs.

Miami-Dade Commissioner Dennis Moss lives a block from the house where the party took place and says he heard the gunfire that night. A few days after the shooting, during a county commission meeting, Moss argued that the gunmen were only able to sneak up on the home because of insufficient lighting on the street.

"You talk about crime prevention through environmental design, and lighting is a big part of that," Moss said during the June 18 meeting. "The shooters used those dark areas that had been created by these LED lights to approach the pool party and open fire. It's not creating a safer environment for the community."

Moss' Kendall neighborhood is one of many in the area that has begun to switch from high-pressure sodium light bulbs to more energy-efficient LED light fixtures. The transition is part of an ongoing contract between the county and Florida Power & Light that will affect 50 special taxing districts with more than 57,000 residents, according to county officials.

The installations were originally proposed and accepted as a cost-savvy alternative to the sodium bulbs that are quickly becoming obsolete. But complaints about the new bulbs have plagued the project as of late. The main critique is they don't cast wide-enough light. Residents say the LED beams are too concentrated and downward-facing, leaving dark areas between light poles.

The new fixtures have become a bête noire for Moss, who first mentioned constituent complaints along with his own reservations about the lights at a June 4 commission meeting. According to Moss, LED bulbs might be welcome in a neighborhood with little crime, but they're a potential safety issue in more dangerous communities. The "dark spots" mentioned by Moss are likely to be more pronounced in older neighborhoods, where light poles were installed 300 feet apart. The distance between poles in newer developments is closer to 100 feet.

Lorena Guerra-Macias, who oversees special taxing districts at the county's parks, recreation, and open spaces department, defended the new light fixtures at the meeting in early June. According to Guerra-Macias, the department has received relatively few complaints about the bulbs and expects residents will come around to the new fixtures. For any issues that remain, FPL plans to return to neighborhoods following installation, likely in October or November, to see whether additional light fixtures are required.

But the commission was not satisfied with such a far-off audit and ultimately sided with Moss on the issue. A motion was passed to suspend all FPL installation activities until a review of affected areas could be completed. Meanwhile, installations will continue in municipalities such as Miami Gardens, which has its own agreement with FPL to replace city lights with LED bulbs.

During the June 18 meeting, Moss said he'd been told that FPL had ignored the motion and was continuing on with installations. The utility company denies this.

An audit of the new street light fixtures is due later this month.
KEEP MIAMI NEW TIMES FREE... Since we started Miami New Times, it has been defined as the free, independent voice of Miami, and we'd like to keep it that way. With local media under siege, it's more important than ever for us to rally support behind funding our local journalism. You can help by participating in our "I Support" program, allowing us to keep offering readers access to our incisive coverage of local news, food and culture with no paywalls.
Make a one-time donation today for as little as $1.