Cleanup Nets a Whopping 1,500 Pounds of Trash From MacArthur Causeway 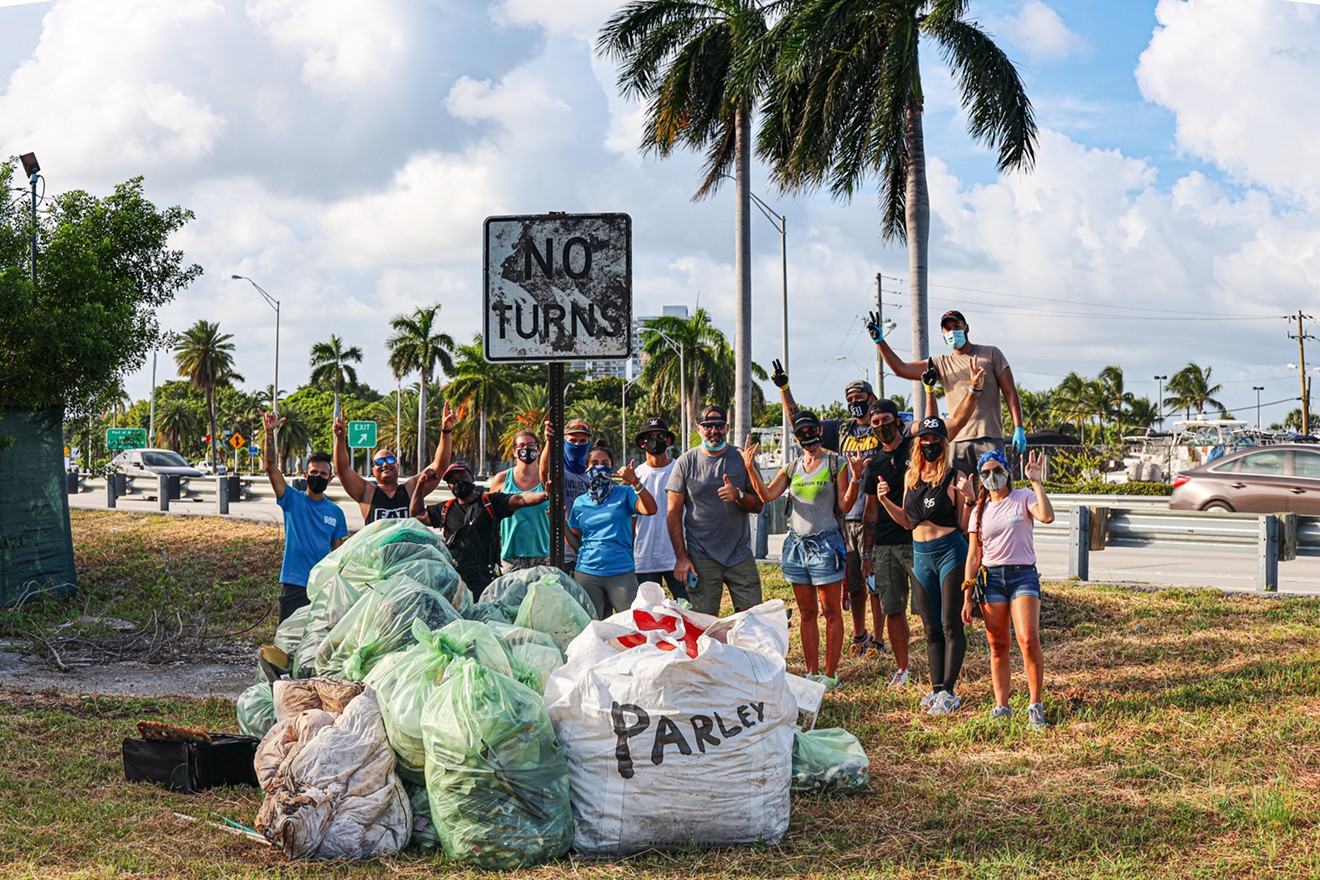 Volunteers with Clean This Beach Up collected 1,500 pounds of trash on Saturday. Photo by Javier Gorguis/Clean This Beach Up
Clean This Beach Up, a Miami Beach-based environmental group, has had a busy few weeks. Earlier this month, a volunteer found a dead, bloated pufferfish tangled in the ear loops of a disposable facemask west of Miami Beach. And while picking up trash along the Julia Tuttle Causeway last week, volunteers found a dead bonneted shark wrapped in fishing wire from mouth to tail.

But what happened over the weekend is impressive based on sheer volume. This past Saturday, volunteers say they collected a record 1,500 pounds of trash during a three-hour cleanup along the MacArthur Causeway on Watson Island. That's about the weight of one and a half grand pianos. Or nine beer kegs. Or 15 toilets.

"And we didn't even make a dent," says Mariajose Algarra, founder of Clean This Beach Up. "That was just from a little stretch [of the causeway]. There's so much trash there, I think we'd need all of Miami to come clean it up."

Algarra says the last time her group collected that much litter was in March, when an army of some 200 volunteers rid Bayfront Park of about 1,300 pounds of trash. This past weekend's cleanup involved 22 volunteers spread out over about one-tenth of a mile, collecting whatever the tide washed up on the rocks along the causeway. Most of what they picked up, Algarra says, was Styrofoam and single-use plastics like water bottles.

"When I tell you it's millions of little pieces of Styrofoam, I'm not exaggerating," Algarra says. "It looks like snow."

THIS IS THE MIAMI THAT NOBODY WANTS TO SEE???????? @offthehookflorida @revolution935 • 22 volunteers 1500 LBS! ???? This is sad reality of our city! People see the cruises and the palm trees, they enjoy the beaches and clubbing, but they have never been behind the scenes. This is the Miami that crumbles! This is the bay that gasps for oxygen. #SaveBiscayneBay ???? • Take action now! Educate yourself, Advocate and Volunteer! #SaveTheBay ???? #cleanthisbeachup #cleanthisbeachupmiami ???? by @javiergorguis

Javier Gorguis, a volunteer and business owner who sells shirts and other products made of recycled plastics, says years of boating opened his eyes to how much plastic litters South Florida waterways, and especially Biscayne Bay. Cleaning excess trash feels important, considering the bay's current state.

"We take so much from the ocean," Gorguis says. "We have to give back to it."

Organizations like Clean This Beach Up may not be able to gather hundreds of people for regular cleanups because of the pandemic, but Algarra and Gorguis say continuing to go out in small groups makes them feel like they're contributing something to the community. The group is used to finding everything from bottle caps and tattered clothes to discarded bikes during cleanups. More recently, they've seen pandemic-related trash — masks, latex gloves, wipes, and sometimes, empty bottles of cleaning supplies.

Since April, Algarra has created social-media campaigns to raise awareness of medical waste in South Florida. Using the hashtag #TheGloveChallenge, she has encouraged people to share photos of the latex gloves they see in the wild. So far, she's received more than 11,000 photos from people all over the world.

When she started seeing masks littering Miami Beach more than any other type of PPE waste, she started another campaign to collect photos of discarded masks. She now invites people to take photos, tag @cleanthisbeachup in posts or Instagram stories, and use the hashtag #pickupyourmask.

Environmental conservation organizations have sounded the alarm about the pandemic causing a wave of ocean pollution. Divers in the Mediterranean Sea have found bunches of gloves, masks, and bottles of hand sanitizer underwater.

There's no telling how much additional waste the U.S. could be producing during the pandemic. But researchers in London estimate that if every person in the United Kingdom, which has one-fifth the population of the United States, wore a new single-use mask every day for a year, it would create more than 72,000 tons of waste.

Algarra emphasizes that people have as much of a responsibility to the environment as they do to keeping themselves and others safe from COVID-19. Clean This Beach Up organizes seawall, causeway, or waterway cleanups with small groups every weekend, usually on Sundays. Masks are required. Anyone looking to volunteer can sign up for the group's mailing list for info on upcoming events.
KEEP MIAMI NEW TIMES FREE... Since we started Miami New Times, it has been defined as the free, independent voice of Miami, and we'd like to keep it that way. With local media under siege, it's more important than ever for us to rally support behind funding our local journalism. You can help by participating in our "I Support" program, allowing us to keep offering readers access to our incisive coverage of local news, food and culture with no paywalls.
Make a one-time donation today for as little as $1.