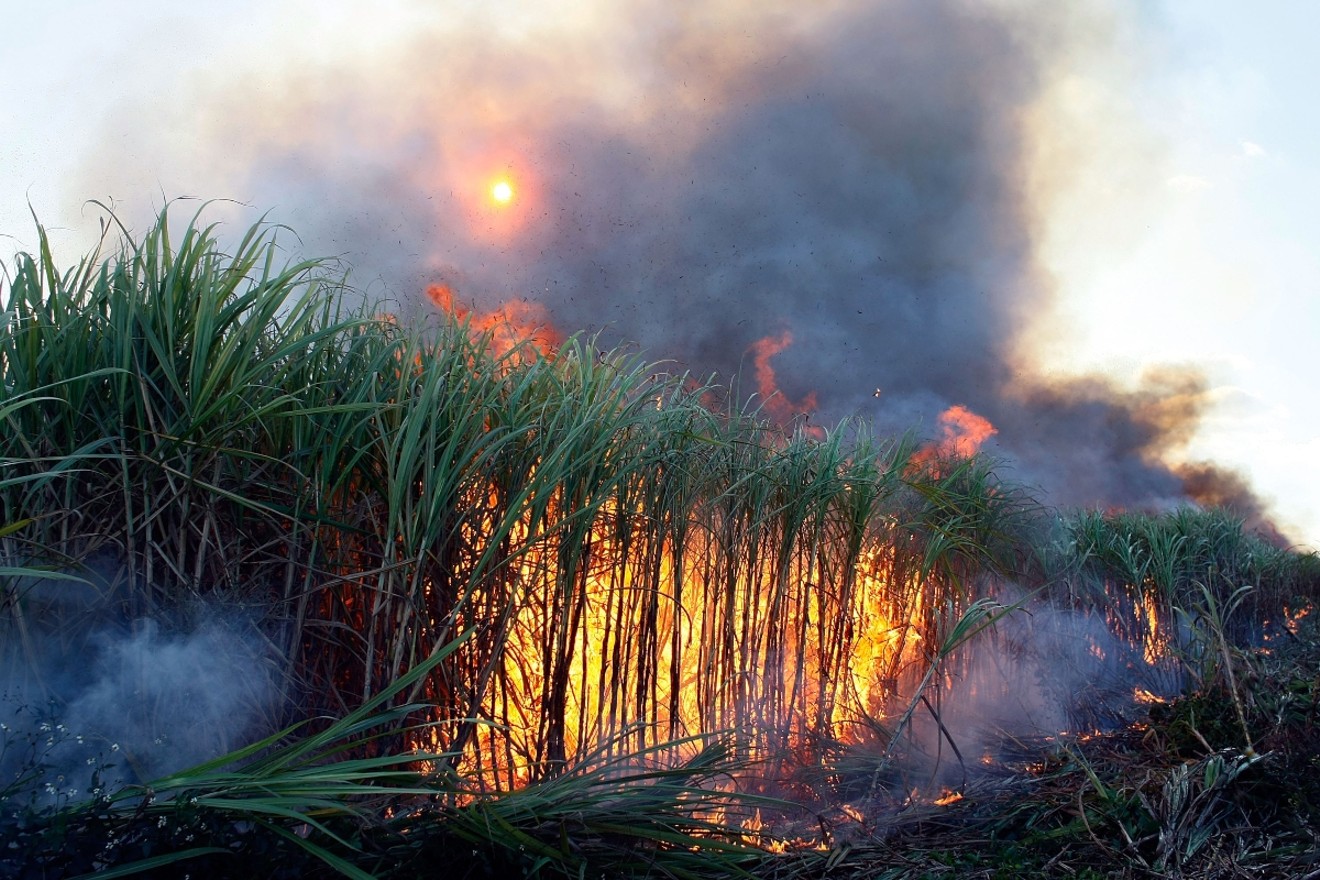 Sugarcane is prepared for harvest by burning off dead leaves in the U.S. Sugar Corporation fields in Clewiston. Photo by Joe Raedle/Getty
In the predominantly low-income, African-American agricultural communities of western Palm Beach County, the annual October-to-May sugarcane harvest means months of intermittent smoke billowing from the cane fields and black soot falling from the sky.

Sugar companies like Clewiston-based U.S. Sugar control 500,000 acres of the Everglades Agricultural Area, which produces 25 percent of all sugar in the United States. The smoke and soot are a result of the harvesting process, which involves burning sugarcane, a tall perennial grass that reaches 20 feet in height. Sugarcane stalks are filled with sucrose, which can be processed into refined sugar. To more easily get to the sugar, the vast sugarcane fields of South Florida are set ablaze every year to burn the stalks clean of their leaves. The bare stalks are then harvested, stacked on trucks, and sent to the mills.

But during the harvest, ash from the fields can fall thickly enough to coat homes and vehicles. The cancer-causing particulate matter in the air is so pervasive in the rural towns of Belle Glade, Pahokee, and South Bay that nurses at the elementary schools keep breathing nebulizers running for sick kids all season long.

An ongoing class-action lawsuit on behalf of residents claims the burning is causing measurable injury to human health, saying that damages for residents' respiratory diseases are long overdue. The suit says burning sugarcane is an archaic and unnecessary practice that causes dire harm to humans and to property.

"Our plaintiffs suffer consistent damage to their properties and also describe health problems, including issues with breathing and congestion," says attorney Steve Berman, managing partner of Hagens Berman, the firm representing residents of Palm Beach County in the lawsuit. "In particular, two plaintiffs have family members with asthma that is significantly aggravated during burn season. One plaintiff is so affected that she sometimes leaves South Bay to stay with her family in Georgia."

The class-action case has been lurching forward since 2019. U.S. Sugar and the other corporate sugar defendants named in the suit are aggressively arguing for dismissal before Judge Rodney Smith in Miami federal court. The Florida sugar industry appears to be treating the suit as a serious threat to its way of doing business — late last year, U.S. Sugar began distributing an inaugural "State of Our Air" report in the communities where the ash falls, arguing that the air is safe and clean.

"The Glades communities have some of the best air quality in the state," the company claimed in the report, which reminded residents that U.S. Sugar provides the region with some of the best and only jobs around. The company is a major employer in the area, with many families having relied on seasonal cane work for generations.

Despite the claims by U.S. Sugar, a joint investigation by Grist and Type Investigations last year cited a Sierra Club analysis of data from the U.S. Environmental Protection Agency showing that 3,000 tons of hazardous pollutants, including a host of carcinogens, are released into the air each year by sugarcane burning in South Florida. And the technique might not even be necessary: In other sugarcane-producing parts of the world, such as Brazil, Thailand, and even Louisiana, the sooty practice is being phased out in favor of mechanical "green harvesting," which doesn't require burning.

U.S. Sugar and its co-defendants say they're complying with state and federal oversight and regulations and claim that residents in the burn zone cannot prove demonstrable health or property harm related to the smoke and ash. U.S. Sugar did not respond to New Times' requests for comment. [See editor's note at end of story.]

Since the case was filed, mayors and pastors across the region have spoken disfavorably about the lawsuit, most notably in an October event that was streamed on Facebook Live. Some residents affected by the burn are torn over whether to hold their family's employer accountable for the harm caused by its business model, while others support the lawsuit's claims.

"Our current political leadership supports the sugar industry, and they have tried to spread fear that stopping the burn will cause job losses," says Muck City Black Lives Matter founder Robert Mitchell, who is running in Belle Glade's city commission election, scheduled for March. (Muck City is Belle Glade's nickname and refers to the local terrain.)

"The sugar producers do know that the burn is causing harm, but when you are a big company, you don't like to be told what to do. In the meantime, our communities are having health issues," Mitchell adds.

The case also highlights another example of American racial inequity. The sugar producers are predominantly white, while the laborers and residents of the towns affected by the fallout of the burn are predominantly Black. The disparity even seems to be codified in one of the regulations enacted by the state in 1991, which forces sugar producers to wait to burn or to use green harvesting when the wind is blowing east, which would carry the soot and smoke to Palm Beach County's white and wealthy coastal areas.

"Black Lives Matter and the sugarcane burning go hand in hand," says Mitchell. "They burn over this community of three African-American cities. But when the wind blows east to the majority-white communities, they can't do that. Take the town of Clewiston, for another example. It has a Walmart with a buffer [against sugarcane smoke] around it. But in our communities, they are allowed to burn. That tells me that Black lives in these communities don't matter."

Mitchell says he, too, has suffered from the smoke.

"I'm a singer, and I used to always wonder why when I would come home from college and back to Belle Glade, after a day or two, I couldn't sing. I'd always get hoarse," says Mitchell, who attended Florida A&M University in Tallahassee. "I called it 'the curse.' Two years ago, it finally made sense to me. I said, 'Oh, my God, it's because the cane is burning.'"

A Sierra Club "Stop the Burn" campaign unaffiliated with the lawsuit has focused its efforts on public education and targeting Florida's agricultural commissioner, Democrat Nikki Fried. Although Fried has authority over the burning and has made a few minor changes to the regulations since 2019, such as outlawing burning at night, she did not take action to stop the current burn season, despite heightened breathing concerns related to COVID-19.

The Sierra Club argues that green harvesting will increase sugar-industry revenues over time and says the sugar industry has not provided any data to the contrary. The environmental nonprofit contends that the industry's harvesters are already fully equipped for green harvesting and that the movement toward green harvesting has the support of the community.

"Our Stop the Burn campaign has not received any negative pushback from local residents," the Sierra Club's Patrick Ferguson tells New Times. "The sugar industry, along with complicit local mayors, push fear and lies in the community in an attempt to prevent the industry from having to address the real substance of the issues. Ultimately, the health, welfare, and economic prospects of residents in and around the Glades are left to suffer while sugar industry executives pursue the short-term profits of toxic, outdated burning over the long-term benefits associated with a transition to modern sustainable green harvesting."

The issue for Big Sugar seems to be the bottom line, with some independent studies showing that green harvesting costs more. One study published in 2010 showed that harvesting sugarcane through burning is significantly cheaper and easier than green harvesting.

As the class-action lawsuit moves forward, it may lay bare the changing norms of the transition from the environmental deregulations of the Trump administration to the Biden administration's clean air and climate goals.

More news on the case is expected in coming weeks.

Editor's note: U.S. Sugar did not respond to New Times’ requests for comment prior to this story’s publication, but the company provided a response via email after the story went live. Spokeswoman Judy Sanchez disputed that sugarcane burns are hazardous to human health, adding that “a large number of other sugarcane producing regions do utilize prescribed sugarcane burns as a standard practice.” Sanchez also wrote that efforts are made to protect sensitive areas during the burns and that those areas are determined by assessing factors such as population density and proximity to schools or hospitals. “Socioeconomic status is not — and has never been — a factor when determining sensitive areas,” she wrote.
KEEP MIAMI NEW TIMES FREE... Since we started Miami New Times, it has been defined as the free, independent voice of Miami, and we'd like to keep it that way. With local media under siege, it's more important than ever for us to rally support behind funding our local journalism. You can help by participating in our "I Support" program, allowing us to keep offering readers access to our incisive coverage of local news, food and culture with no paywalls.
Make a one-time donation today for as little as $1.