Say Goodbye to the Collectors of Florida's Iconic Toll Booth 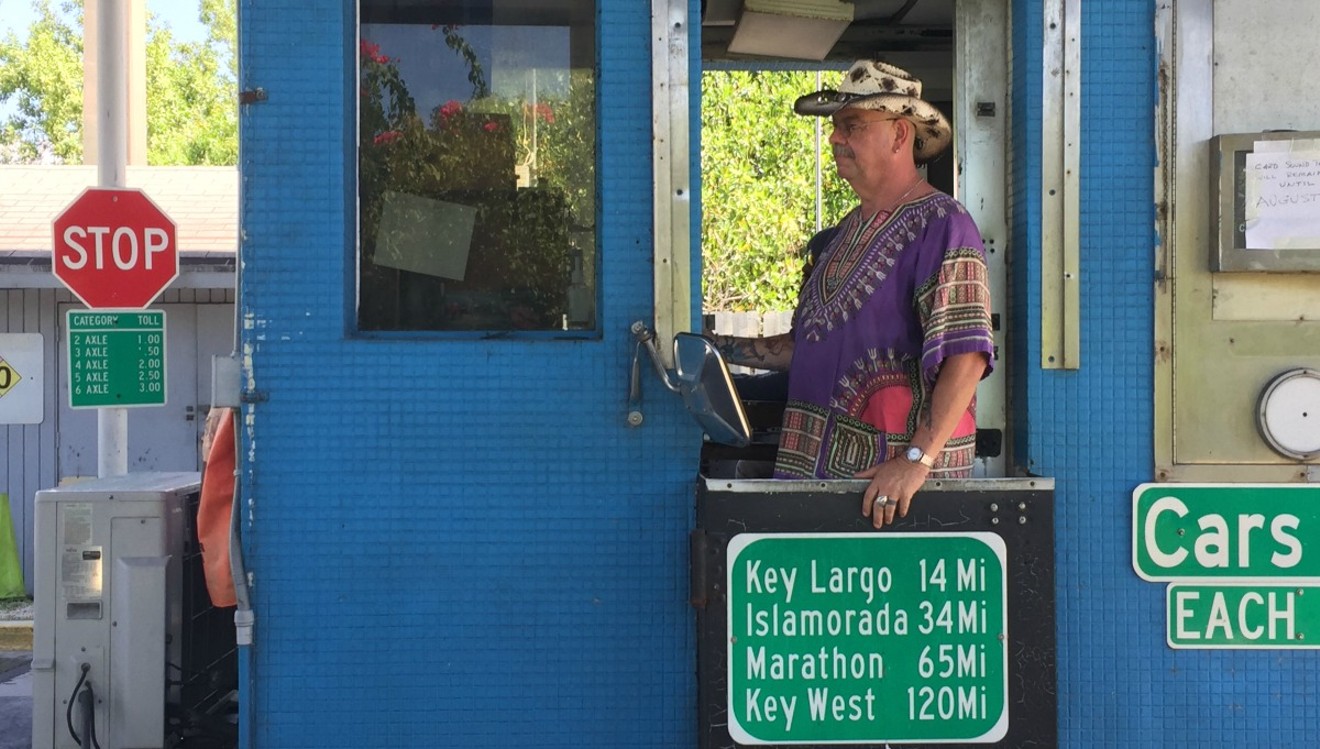 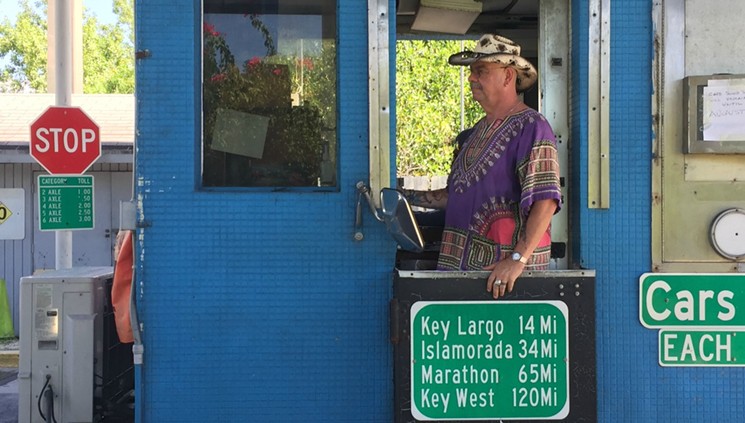 Photo of Ken Murray
Photo by Isabella Gomes
Ken Murray, a gray-mustached toll collector famous for his purple dashiki and straw cowboy hat, leans on the gate of a toll booth the size of a gas-station restroom. The remote toll booth, located 12 miles off South Dixie Highway, welcomes any motorist who braves Card Sound Road, a narrow, two-lane strip straddled by murky mangroves and alligators.

Suddenly, Murray hears the screech of tire rubber shrieking across wet asphalt. He looks up from his cash register and sees a car barreling toward the station. As the car rapidly nears the entrance, he sees a crazed-looking man riding on the back of the car.

"Oh my God," he realizes, "the driver is trying to shake this guy off." As the car picks up speed, Murray frantically braces for impact, but surprisingly, it stops at the gate. Instead, the crazy hitchhiker, visibly drug-addled, leaps into the air, shoulder-slams into the toll booth window, scrambles toward the toll booth gate, and jerks it open. Though Murray desperately tries to block the break-in, the hitchhiker shoves back and, after a brief brawl, overpowers him. Rattled, Murray escapes and immediately calls 911.

Half an hour later, police arrive, but by then, the intruder has left the toll booth and jumped into a nearby canal. The officers pull the hitchhiker out of the water and roll him over. He’s dead.

“My last vision of the guy was through the doors of the ambulance,” Murray says today. “They had a pumper on him, pumping him with air.”

The druggie's dramatic death, which happened around 15 years ago, though Murray is hazy on the exact date, was just one of the countless sensational accidents and incredible situations he’s seen while taking tolls on Card Sound Road. But the 59-year-old from the Redland insists the good experiences have outweighed the bad. Over his 25 years of service, Murray has watched the historic toll booth become a local tourist attraction, not only for its quirky workers but also for its unique place in the northern wilds of the Florida Keys' mangroves, where it’s quickly become a favorite haunt of motorcyclists and anyone else looking to escape Miami.

But last Thursday, Monroe County officially shut down the toll booth in favor of an automated SunPass system. As the remaining five toll workers packed up for their last day, New Times visited the station to ask for some of their craziest stories of manning one of Florida’s last human-staffed toll booths.

While saying goodbye to Murray, 66-year-old Miami native Dan Retting reminisces: “This all here used to be old growth forests with nothing but a road. We’ve been here since Alabama Jack's — that’s the restaurant down the road — was nothing but a fishing can. We were here even when [Hurricane] Andrew flattened everything and stripped the canopies right off.” 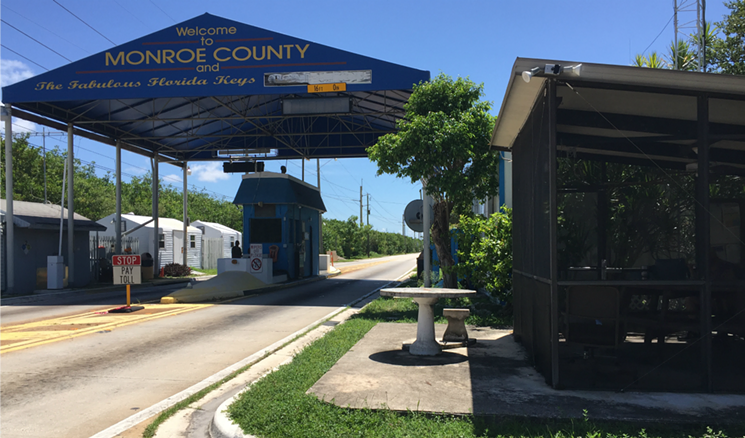 Photo by Isabella Gomes
By the mid-1960s, thousands of commuters every day poured down Overseas Highway from Florida City to Key Largo, leading to regular congestion at the entrance to the Keys. The state came up with a solution in 1969: the Card Sound Bridge, which gave commuters a second way into the islands by skirting the wild north edge of Key Largo and instead heading past the beachfront communities of Ocean Reef and the Anglers Club.

In the middle of the narrow road, a toll booth was built. Motorists had to pay 50 cents per axle in cash. At the station, human toll collectors manually punched tickets and hand-printed receipts. Though traffic occasionally built up, Card Sound quickly became known for its toll workers, the friendly gatekeepers of the Keys, who offered greetings, dog biscuits, and, in one instance, Werther's Originals, to customers.

Before he came to Card Sound Road, Murray lived in Connecticut, where he drove a forklift for a factory. After 13 years, his wife got sick, so the couple sold their house and moved to South Florida for its tropical climate. Desperate to find work, Murray bounced between jobs, cleaning yards and working at a Pizza Hut, before he came across an application to work for Monroe County in 1992. By February that year, he was a full-time toll collector.

He joined other long-timers such as Claude Celin, who had left Haiti in 1979 to work in a restaurant in Miami. A year later, he decided to visit the Keys and came across the toll booth. Enamored by its pastoral charm and humid weather, he moved to Homestead and applied for a maintenance job on Card Sound Road. For the next 27 years, he cut grass, trimmed trees, and waved to travelers, who quickly learned his name.

Over the years, Card Sound’s toll collectors have met their share of characters. In 1990, security was increased after the toll booth was robbed twice one Saturday morning in December. A drunk 20-year-old man walked up to Jack Ramsey, the attendant at the time, asking to use a telephone, so Ramsey directed him to Alabama Jack's, a seafood hot spot located less than 100 yards from the booth. Disgruntled, the man later returned, this time with a four-inch knife. Within minutes, he left with $188. Six hours later, a 40-year-old man in a hooded sweatshirt broke into the booth and threatened another attendant, Virginia Nicholson. Though he wasn't carrying a weapon, by the time he left, the cash drawers were empty.

Two years later, Hurricane Andrew, a Category 5 storm, ravaged Florida City and Homestead. As the toll booth’s longest-serving employee, Celin has become the go-to storyteller of what happened during the storm. According to him, gales of wind whipped buildings from their foundations and ripped speedboats from their piers. Even the old toll office lay in ruins, while a 50-foot sailboat washed up next to the station. Nearby cities were flooded and torn to shreds, but “the toll booth survived,” Celin says.

In the following years, the area was rebuilt, including Alabama Jack's. Known for its conch fritters, the waterside restaurant regularly draws patrons, except for one day when it received a surprise visitor, says Don Crouch, the toll booth’s 71-year-old superintendent from Islamorada.

"A Black Hawk helicopter from Homeland Security landed on the road and blocked it for three-quarters of a day," he says. Angry drivers were rerouted to Overseas Highway, and patrons of Alabama Jacks went home, disturbed by the noise coming from the chopper. Days later, Crouch says, the helicopter operators returned to the restaurant to host a party: "I guess they felt bad for taking away the restaurant's business."

Photo of Claude Celin
Photo by Isabella Gomes
Meanwhile, Murray says he’s often had to deal with weirder problems as a toll collector. More than a decade ago, he was punching tickets when an eight-foot crocodile waddled onto the road. For ten minutes, the scaly predator loitered four feet from the booth before disappearing into the creek. Since then, whenever a customer asks if there are alligators or crocodiles in the area, Murray jibes back, “You got a bathing suit? We’ll go find one.”

Unfortunately, not all of Murray’s stories are as laughable as his tales of crocs on the road, bobcats stuck in car grills, or counterfeit $1 bank notes. In 2007, a regular had just passed through the booth with his girlfriend sleeping in the back seat. The couple ended up stopping at a Shell gas station down the road when an armed carjacker suddenly jumped in and drove off with the woman still inside. With police officers nearby, the theft quickly turned into a car chase. The assailant ultimately lost control near a construction site and crashed into an 18-wheeler. Both he and the woman died.

"I've had people leave here but never make it out," says Murray, who serves nearly 2,000 customers every day. "That's the hardest — finding out they died five minutes later."

Luckily, Murray says it hasn’t been all doom and gloom. Three years after the deadly tractor-trailer accident, the toll booth became one of the honorary checkpoints of the 2010 Hoka Hey Challenge, a motorcycle endurance race in which 600 bikers rode 8,500 miles from Key West to Homer, Alaska, for a half-million-dollar purse. Large men with handlebar mustaches and skullcaps sped up to the toll booth, sometimes two at a time, trying to get a toll ticket to prove they had passed through. Chuckling, Murray shakes his head and remembers, “There was this one biker carrying four gas tanks so he wouldn't have to refill. You know how dangerous that is if you get in an accident? You're dead."

In the following years, the toll booth saw less drama, other than the occasional tragedy of someone jumping off Card Sound Bridge and falling to their death.

“One kid died and another broke his leg,” Crouch says. “There are even signs saying, ‘No Jumping.’”

However, in 2017, Card Sound Road once again made the news after a couple from Naples made a startling discovery. This past August, a man and woman had been diving for lobster under Card Sound Bridge when they spotted a skull and several other bones. After a quick medical examination, the remains were suspected to belong to James Dzadura, a 38-year-old who was assumed dead in 2013. At the time, Dzadura was wanted by Miami-Dade Police on a sexual battery charge. He sent a text message to a relative, saying he had tied a 40-pound weight to his body and was planning to jump off the bridge. A couple of hours later, Monroe County deputies found his minivan beside the bridge. The keys were still in the ignition.

After punching the last ticket of the day on the booth's final afternoon, Murray locks up and walks toward his gold Dodge Ram. He gives the booth one last look.

“I’m gonna miss this place,” he murmurs. “It’s been a part of history.”