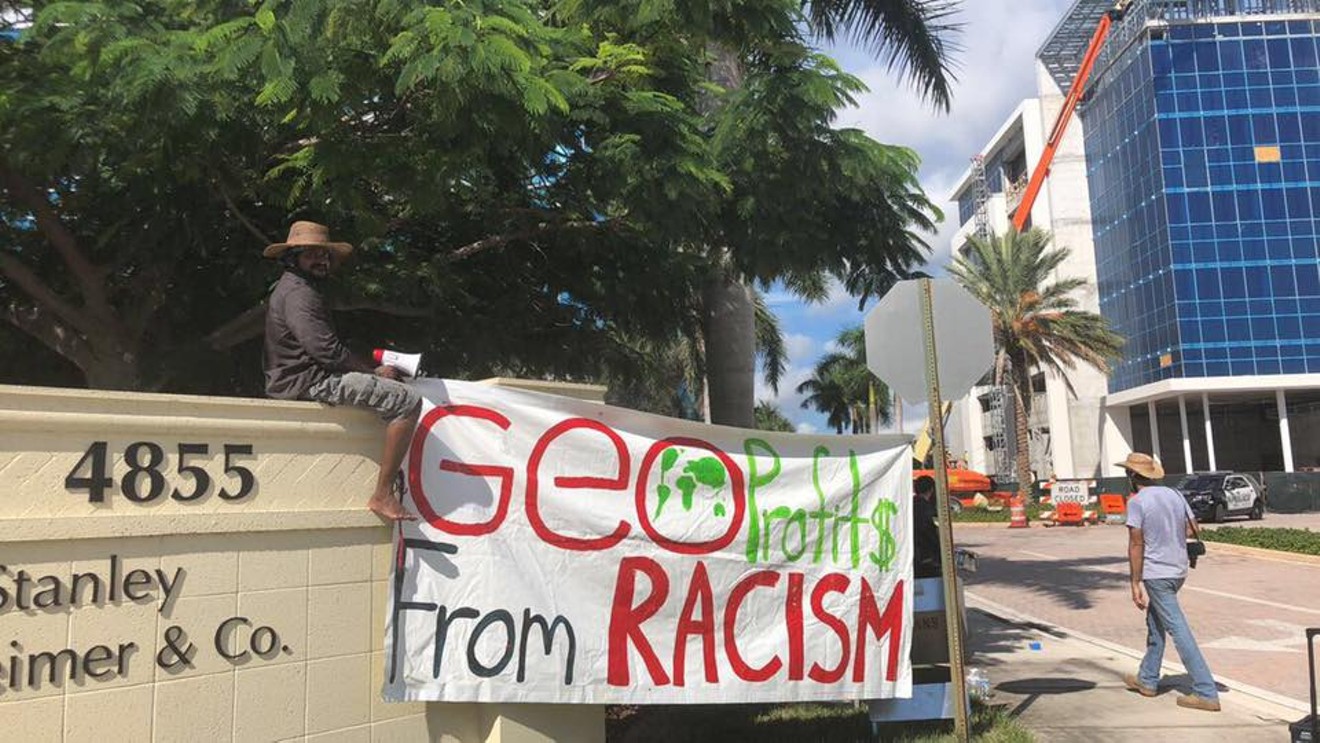 Activists protest outside GEO Group headquarters. Photo by Braeden Glickman
Every summer, people of the Jewish faith commemorate the day of Tisha B'Av by fasting and mourning. The date memorializes the destruction of the First and Second Temples in Jerusalem centuries ago. In modern times, Tisha B'Av has become an annual opportunity for activism or charitable acts — a time to practice tikkun olam, the Jewish teaching of "repairing the world."

Across the nation this past weekend, T'ruah — a Jewish human-rights advocacy group — organized multiple vigils to protest the Trump administration's cruel treatment of immigrants and asylum seekers. As part of that effort, activists will demonstrate outside GEO Group headquarters in Boca Raton today from 11 a.m. to 2 p.m.

"It's time for the Jewish community to speak up for refugees and immigrants," says Charlie Nolan, an organizer with Never Again Action, a recently formed Jewish activism group. "When we see immigrants being dehumanized, marginalized, and stripped of their rights, it is a mirror image of the steps that were taken prior to our own genocides. We remember that, before there were death camps, there were 'detention centers' and mass arrests. When we say never again, we mean it."

Originally founded as the Wackenhut Corporation in Coral Gables, GEO Group has grown into the single largest contractor for Immigration and Customs Enforcement (ICE) and now operates more than 130 detention centers and prisons worldwide. Just last week, GEO opened a $57 million office building off I-95 near Florida Atlantic University.

"Never Again Action will gather outside GEO Group's world headquarters to express grief and rage that the company makes millions of dollars from the suffering of immigrant communities," a release from the protest's organizers states.


@GEOGroup is ICE’s biggest detention center profiteer, and the second largest private-prison company in the world.

On Tuesday we shut down their west coast office in LA. On Monday, we’re taking the fight to their global headquarters Boca Raton, Florida! https://t.co/650Rc4HUZS pic.twitter.com/fY8qErFIez

Activists with the Miramar Circle of Protection, Friends of Miami-Dade Detainees, Food Not Bombs Fort Lauderdale, and United We Dream will join the demonstration. One of the organizers, Nicole Morse, tells New Times that Jewish advocates want to show they are allied with immigrant communities.

"For a lot of us, what's really important — especially in our area of South Florida with such a strong Jewish community — is to make it very clear to the rest of America that the Jewish community is in solidarity with people who are being most overtly targeted by the Trump administration," she says.

Morse says the protest group hopes the demonstration, which was purposefully delayed from the weekend to a workday, will reach the people who work at GEO's complex.

"Our hope is to ensure that the workers in GEO's headquarters hear us and hear our protest, hear our calls for them to stop literally everything they're doing," she says. "Their entire business model is based on profiting from people's pain. We want to get people in the community to recognize what's going on right in our backyard."
KEEP MIAMI NEW TIMES FREE... Since we started Miami New Times, it has been defined as the free, independent voice of Miami, and we'd like to keep it that way. With local media under siege, it's more important than ever for us to rally support behind funding our local journalism. You can help by participating in our "I Support" program, allowing us to keep offering readers access to our incisive coverage of local news, food and culture with no paywalls.
Make a one-time donation today for as little as $1.