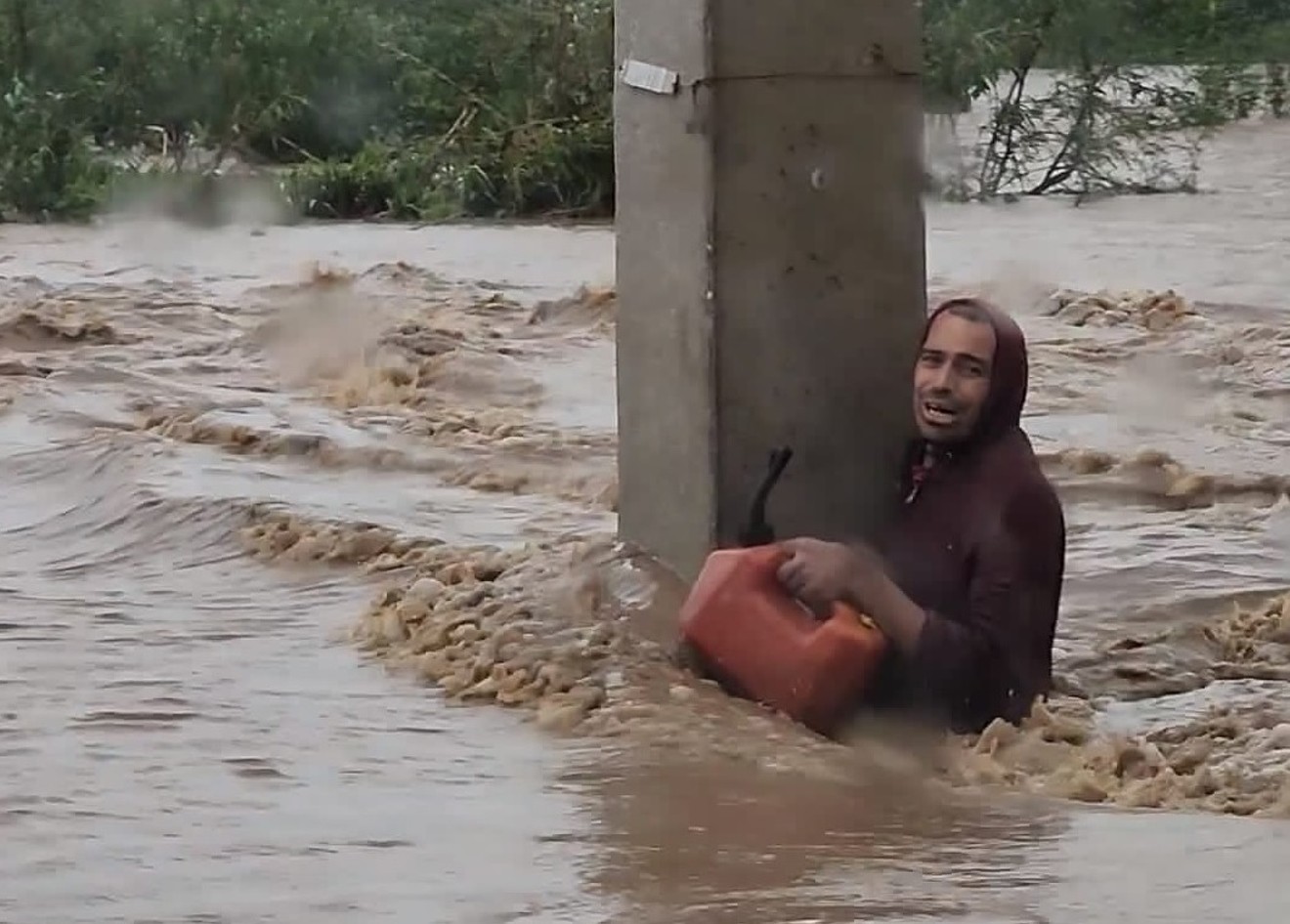 A man clings to a concrete beam in Ponce, Puerto Rico, during flooding caused by Hurricane Fiona Sept. 17-18, 2022. He was rescued by members of the 125th Military Police Battalion. Photo by Puerto Rican National Guard
A day after pummeling Puerto Rico, causing catastrophic flooding and leaving almost the entire island of 3.2 million residents in the dark, Hurricane Fiona ripped across the neighboring Dominican Republic.

According to the National Hurricane Center (NHC), Fiona was still wreaking havoc across much of Puerto Rico when it reached the coast of the Dominican Republic early Monday, September 19. As the hurricane moved across warmer waters and away from the Dominican Republic Tuesday, it strengthened into a Category 3 storm with 115 mph sustained winds — marking the first major hurricane in the Atlantic this year.

As of now, Fiona is not expected to approach the east coast of the U.S.

"Hurricane conditions are spreading over the Turks and Caicos islands, while tropical storm conditions should spread over the southeastern Bahamas during the next few hours," the NHC said Tuesday morning.
click to enlarge One day after Hurricane Fiona struck, rain falls on the town of Cayey, Puerto Rico, on September 19, 2022.
Photo by Jose Jimenez/Getty Images

Heavy downpours from trailing bands of the storm drenched Puerto Rico and the Dominican Republic the evening of September 19.

Up to 15 inches of total rainfall were expected across the eastern part of the Dominican Republic. Estimates of rainfall in southern Puerto Rico range from 12 to 20 inches, with localized downpours exceeding 30 inches.

This past weekend, President Joe Biden declared an emergency in the U.S. territory, mobilizing the Department of Homeland Security and the Federal Emergency Management Agency to coordinate disaster relief efforts on the island. Puerto Rico Gov. Pedro R. Pierluisi later said at a Monday press conference that more than 1,000 stranded residents had been rescued across 25 municipalities.

While Puerto Rican officials cautioned that it's still too early to assess the full scope of Fiona's damage, they confirmed multiple deaths across the island. One man reportedly died in the storm in an accident involving a gas generator. His wife, who suffered severe burns, survived.

Puerto Rico National Guard Soldiers from the 125th Military Police Battalion help rescue families trapped by floods during the passing of Hurricane Fiona. The Guard prepositioned personnel and heavy equipment in nine locations before the storm.
Photo by Puerto Rican National Guard
Puerto Rico's infrastructure was already in a fragile state, still recovering from Hurricane Maria, which made landfall on the island in September 2017 as a Category 4 storm. Maria devastated Puerto Rico, killing thousands of residents and leaving nearly half of the island's homes without power for months on end.

The Puerto Rican government privatized its grid's transmission systems in 2021 in hopes of improving electrical service, but  the country continued to experience widespread blackouts. Prior to Hurricane Fiona, many frustrated and desperate residents had been taking to the streets in protest and calling on Gov. Pierluisi to cancel the country's 15-year contract with its main power utility, LUMA Energy, which began in June 2021. Last month, Pierluisi publicly criticized the company following a string of blackouts across the country.

As of Tuesday morning, more than 1.18 million of 1.46 million LUMA customers remained without power in Puerto Rico, according to PowerOutage.us.

LUMA says it has mobilized nearly 2,000 employees and contractors to restore the power grid.

"We will continue to work non-stop until every customer is restored and the entire grid is reenergized," the company says.

Gov. Pierluisi has not given a precise timeline for when Puerto Ricans can expect power to be restored. He claims, however, that it will be a "matter of days," not months.

The Dominican Republic has been battered by hurricanes in recent years as well.

It was ravaged by flooding from the remnants of Hurricane Beryl in July 2018. In August 2020, less than a month after being struck by Hurricane Isaias, the country sustained extensive damage from Hurricane Laura.

Fiona is forecast to become a "major hurricane" (aka a Category 3 Hurricane or higher) by Wednesday.
Forecast image by National Oceanic and Atmospheric Administration (NOAA)
KEEP MIAMI NEW TIMES FREE... Since we started Miami New Times, it has been defined as the free, independent voice of Miami, and we'd like to keep it that way. With local media under siege, it's more important than ever for us to rally support behind funding our local journalism. You can help by participating in our "I Support" program, allowing us to keep offering readers access to our incisive coverage of local news, food and culture with no paywalls.
Make a one-time donation today for as little as $1.