Photo by Keith Allison
The Miami Heat, which collapsed in the third quarter during last night's game against the Orlando Magic, is an unmitigated disaster. The team is too prideful to tank for better draft lottery ping-pong balls and too star-deficient, overpaid, and unmotivated to excel. This has so far made the 2018-19 Heat is the worst thing you can be in the NBA — stuck in the middle. With more than a quarter of the season in the books, it's obvious this team is going nowhere. Mass changes are needed and fast.

The Heat didn't get to this sunken place overnight, of course. The last ten years of Miami Heat basketball can be summed up aptly Before LeBron James (BLJ) and After LeBron James (ALJ). Many self-inflicted wounds followed LeBron's departure from the 305 in 2014. Some harmful occurrences were unavoidable. Combined, it's all taken a toll on the franchise.

The Heat has made a lot of moves ALJ. Many have turned out to be bad. Here, in our opinion, are the worst things to happen to the Miami Heat since LeBron left for Cleveland in free agency.
1. Everything Chris Bosh. It feels like a decade since Chris Bosh had to retire due to multiple battles with blood clots. Just as the Heat acquired Goran Dragic — literally within a day or so — Bosh was lost. Losing a future Hall of Fame forward in the prime of his career sucks. Losing a future Hall of Fame forward to blood clots days after trading away two first-round picks for an elite point guard and months after losing LeBron James is next-level terrible.

The Heat would eventually get to use the 20-plus million dollars a year in cap space earmarked for Bosh, but twice that amount couldn't replace what he meant to the franchise and what he would have brought to the team after LeBron left. 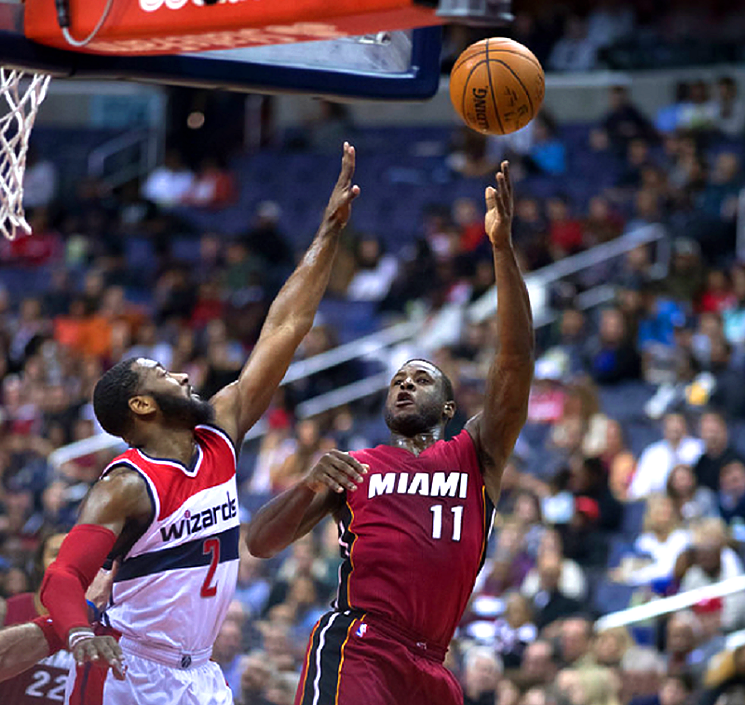 Photo by Keith Allison
2. Following an 11-30 start in 2016-17 with an improbable 30-11 finish. How can winning 30 of 41 games to finish a season be a bad thing? Impossible, right? Super possible. The Heat proved this in 2016. The run not only did nothing for that season (the Heat finished 41-41 and missed the playoffs), but it was the Big Bang for what is now the Heat universe — overpaid veterans who got big contracts for playing their asses off that one time.

James Johnson and Dion Waiters are the two glaring examples. The 2016-17 finish "earned" them nearly $100 million from the Heat over the next four seasons. In reality, the entire team was a disaster because to this day, the Heat is chasing the ghosts of 30-11 past. All of today's bad contracts can be traced to that 41-game stretch directly or indirectly.

The Heat has paid for that run and will still be paying for it in two years. That season should have been a rebuilding year following the loss of Bosh and LeBron. Instead, it's become one of the worst things to ever happen to the franchise.

3. Awarding Hassan Whiteside a max contract. In the year ALJ, the Heat was desperate for bodies. Late in the season, the club brought up Hassan Whiteside from their D-League team. Soon after, it became apparent the team had stumbled upon a seven-foot center capable of changing an entire game, something teams draft for at the top of the lottery. Whiteside instantly gave the Heat a big-minutes player at a ridiculously good salary value.

Good news, right? Wrong. The Heat dated, then married a stripper in Hassan Whiteside. The team showered him with a max-contract $100 million . The Heat is paying top dollar for a '90s era center in 2018 because many assumed he would be an instant trade chip. Dwyane Wade left in free agency in 2016 in large part because the Heat wanted him to wait out Whiteside's payments to see what was left for him.

All Whiteside has been since the Heat rewarded him with that contract is a massive anchor on the salary cap. His play is such that more times than not, the team decides he can best help at the end of games by staying on the bench. (Witness last night's loss to Orlando.) All this, of course, comes with the constant headache of having to babysit Whiteside in hopes he doesn't bad-mouth the coaching staff after a game in which he didn't play enough for his liking. The Heat would have been better off if they never met Hassan Whiteside. Or if they met him in 1996 instead.

Photo by George Martinez
4. Matching Tyler Johnson's 2016 contract offer from the Nets. Four years, $50 million: That's what the Heat gave Tyler Johnson to stay in Miami in the summer of 2016. It was a panicky bad deal then, a catastrophically horrendous deal now. The Heat is paying Johnson star money this season, roughly what Kyrie Irving makes in Boston. And the club will do it all over again next season.

This should not have happened. Tyler Johnson has always been what he is again this year — a 20-some-minute-a-game player off the bench who will once in a blue moon score 20 points. He's a forgettable player the Heat wouldn't miss if he were traded and doesn't miss when he's hurt. And it all happened because the Heat panicked after Dwyane Wade left in free agency.

Pat Riley and the Heat will eat it one more season. Then they'll have $20 million to spend again, this time on an actual difference-maker.
5. Pat Riley has proven unwilling to take one step back to move three forward. Throughout his time in Miami, Pat Riley has had a reputation for not being a big fan of young players. While there are certainly some huge exceptions to this (see: Dwyane Wade), overall it's pretty clear the 73-year-old Heat showrunner doesn't enjoy watching the grass grow. This thinking was fine when he was scoring trades for Alonzo Mourning, Tim Hardaway, and Shaq, or able to convince players like LeBron James to come to Miami in free agency. Since LeBron left Miami? Not so much. Riley's drive to always win and win now has hurt the franchise more than it has helped.

It's uncomfortable to talk about Riley hurting the franchise. And he's earned the right to burn it all down five times over. The problem is that since LeBron left, all Riley has done is light the match. He's burned up the salary cap for the hell of it. He's traded away draft picks to be average. He's pretty much done all he can to save face. All it's gotten the Heat are Miami Dolphins-like .500 seasons and nothing to excite the fans.

Riley has earned the right to torpedo this franchise. Whether people like to talk about it or not, he's done exactly that in recent years. Anyone else would be fired after this season.
KEEP MIAMI NEW TIMES FREE... Since we started Miami New Times, it has been defined as the free, independent voice of Miami, and we'd like to keep it that way. With local media under siege, it's more important than ever for us to rally support behind funding our local journalism. You can help by participating in our "I Support" program, allowing us to keep offering readers access to our incisive coverage of local news, food and culture with no paywalls.
Make a one-time donation today for as little as $1.