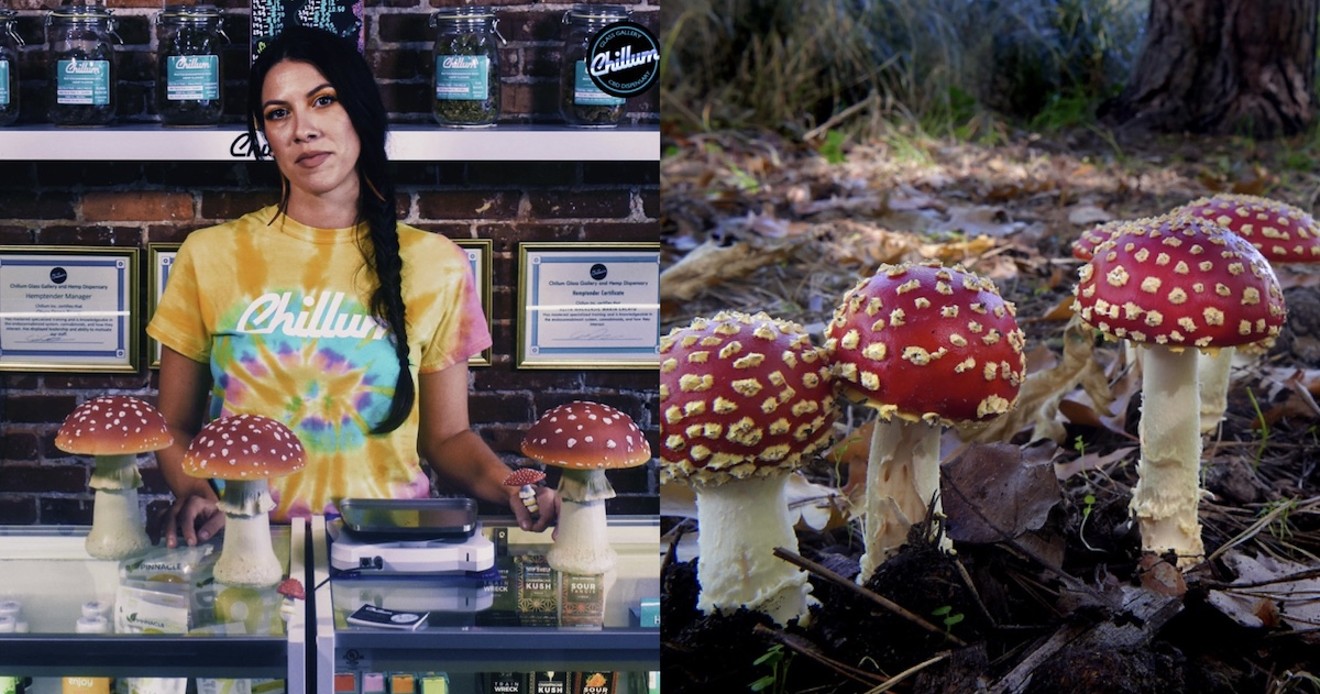 Photo (left) by Carlos Hermida/Bernard Spragg via Flickr
Florida's first so-called "magic mushroom" dispensary has halted sales of its fungi after state officials determined that some of its products could cause, erm, more than just a bad trip.

Chillum quickly caught the attention of psychonauts and researchers, popping up in local and national headlines and calling itself the "first mushroom dispensary in the United States."

But last month, the store abruptly announced that it would no longer sell the Amanita shrooms.

In a blog post in mid-December, Chillum's founder and owner, Carlos Hermida, revealed that the Florida Department of Agriculture and Consumer Services had investigated Chillum's fly agaric products and determined that they contained a "poisonous or deleterious substance" in violation of Florida food-safety law.

"We have some very unfortunate news to share with you all," Hermida wrote in a December 13 blog post. "The Florida Department of Agriculture and Consumer Services paid us a little visit last Wednesday, December 7, and placed a stop sale on all of our products containing Amanita muscaria mushrooms, [w]hich means we will no longer be able to provide you with the Legal Magic Mushroom products!"

A food safety inspection report obtained by New Times (attached below) shows that the department issued a stop-sale order on a handful of Chillum's products that tested positive for Amanita muscaria, ranging from "Microdose Penis Envies Capsules" to "Magic Mushroom Berry Gummies."

In a statement released Friday, Hermida said that Chillum mistakenly "sealed their own fate" by encouraging customers to consume the products to experience a micro-dosing effect or psychedelic trip. He claims he likely would have been just fine if he sold the mushrooms solely for educational purposes.

"This is our fault," Hermida wrote. "We don't blame [The Florida Department of Agriculture and Consumer Services] for the stop sale."

Though humans have consumed fly agaric for thousands of years, a number of researchers have identified the raw mushrooms as poisonous. One leading mycologist said in a 2019 interview that Amanita muscaria is "one of the most dangerous mushrooms" and causes "temporary insanity."

According to the U.S. Department of Agriculture, the mushroom was once closely associated with northern European and Asiatic shamans and rituals.

The psychoactive effects of Amanita muscaria are notably different from that of Psilocybe cubensis — the traditional "magic mushroom" species — which contains psilocybin, a compound that is currently in clinical trials for the treatment of depression and produces hallucinations comparable to those induced by LSD. Amanita muscaria mushrooms are said to produce a markedly different trip that entails delirium, sweating, perceptual distortions, and nausea, depending on the dose ingested.

Hermida emphasizes that Chillum is complying with the state's orders and has stopped selling edible Amanita muscaria products. However, he asserts his unwavering belief that consuming the mushroom has redeeming value.

He claims the fungus is simply misunderstood.

"Truth is, even though there are a lot of 'researchers' in western culture that deem this mushroom as poisonous, there are indigenous cultures that have been consuming the Amanita mushroom for spiritual purposes for a very, very long time," Hermida wrote in a statement.

In the meantime, Hermida says that the dispensary plans to launch an educational venture that will offer classes on psychedelics and enable participants to obtain fly agaric ("Not for consumption!" he adds.)