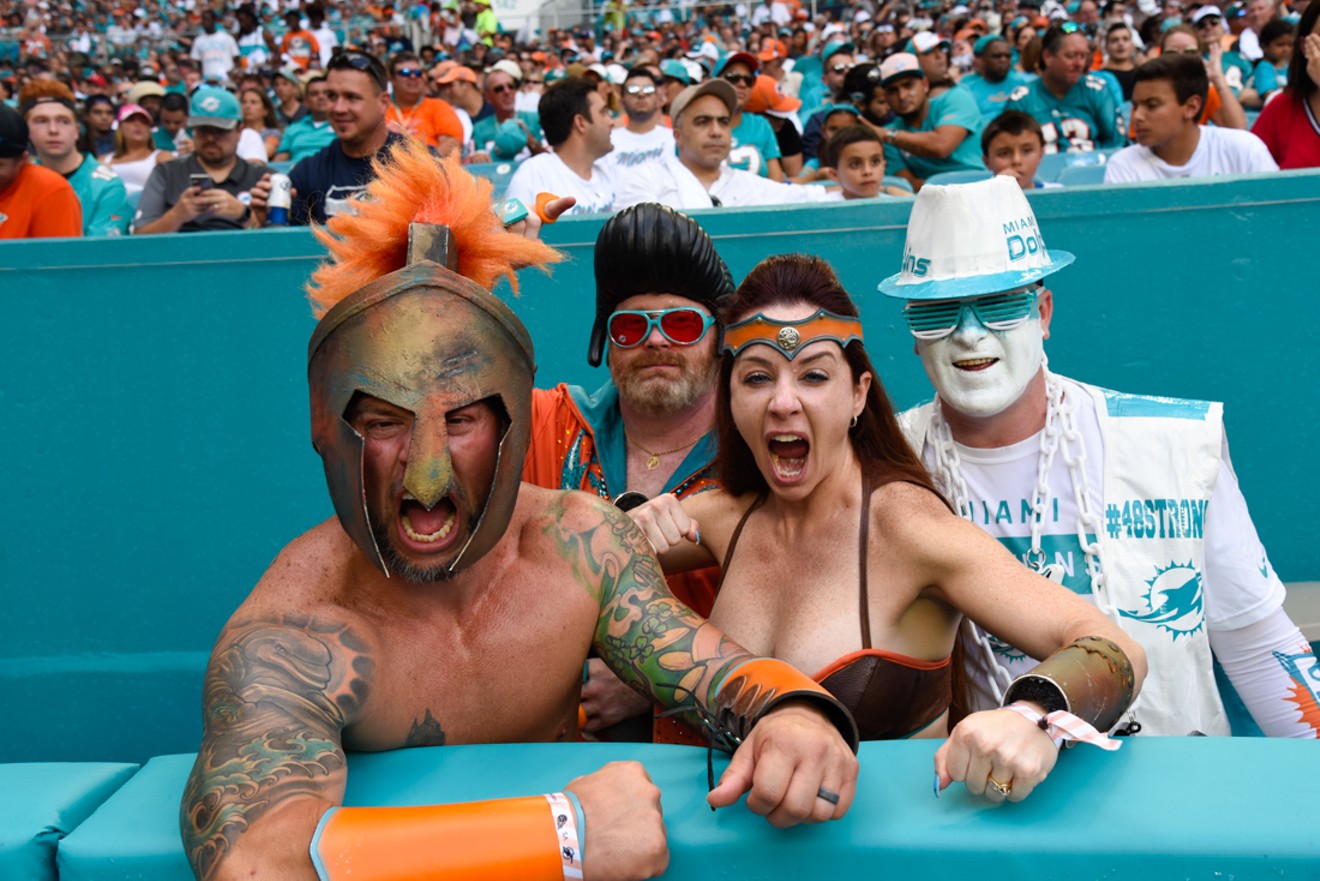 Crazy or just really passionate? Photo by Michele Eve Sandberg
There are two types of sports fans: those who back local teams, and everyone else. Very few people fall into a gray area. Chalk it up to the not-us crowd hating us because they ain't us or to Miamians' sense of us-against-the-world mentality drilled into us because of all the UM Canes hate over the years, Marlins jokes, and, more recently, Heat-fan slander, but that's how it feels — them and us.

In the Miami sports-fan kingdom, there are certainly subcategories, though. Oh, it's a circus full of freaks. We're not apologizing for it; we're owning it. It's what makes Miami different and special.

Here are a few kinds of sports fans everyone in Miami knows or has encountered in the wild at some point. It's an eclectic bunch. Collect them all!

Christina Mendenhall
1. Tailgate Hero. Not all heroes wear capes. When it comes to Miami sports fans, sometimes they put on beer-funnel hats. They also make Jell-O shots and boast Bobby Flay-like skills on the grill. Tailgate heroes prepare for the weekend long in advance. They train in the offseason by buying contraptions on eBay and cornhole boards customized with their team's logo. They take this crap seriously. It's in their DNA.

The rest of us only know where to show up for a good time. Tailgate heroes wake up at 5 a.m. Sunday to collect everything needed. They wait outside Publix at 7 a.m. to pick up the chicken tenders ordered in advance. What follows the tailgate might be a game, but the setup and food outside sure as shit are not. You better respect that. And you should ask before bringing some random person. This is Tailgate Hero's dojo.

We all need tailgate heroes in our lives. They bring the best out of our game-day experience.

Photo by George Martinez
2. Cosplay Fan. If you routinely dress like one of the people in the above photo to go to games, you are a cosplay fan. And you probably have a weird obsession with Disney World or comic books outside of this sports thing. You are just channeling that behavior into the world of sports.

It's fine, really. We're not here to judge anyone. If you want to put together a Dolphins-themed superhero costume or dress like a tiki torch, that's great. You're entertaining us, so we should be thanking you for your service. While the rest of us are eating warm nachos and drinking cold beer in our seats, you're out there risking your life by straddling a railing while wearing a costume that's better than anything we've ever done for Halloween.

If 70,000 Hurricanes fans were all dressed this way, imagine how intimidating it would be for opposing teams. They'd never be able to concentrate or feel safe.

Alex Broadwell
3. Cocky Miami Fan. These are chameleons. They channel all of their cockiness toward whichever local team is kicking the most ass at a particular time. LeBron-era-cocky Miami Heat fans will go down in history as being the greatest of the bunch. You couldn't tell them shit. There was zero doubt the team could overcome any obstacle. In the past, Hurricanes fans led the way in cockiness. The school known for swagger bred such fans.

Miami fans just do things differently. Some fan bases are quietly confident. Miami's is not. They will let New York Jets fans know how badly the Dolphins will kick their asses even if the Dolphins stink.

It's just in cocky Miami fans' DNA to talk that talk. They also tend to follow the hottest team in town.

U.S. Trademark Office / Courtesy of Creativas Group
4. Soccer Diehard. We all know at least one guy who wakes up at 7 a.m. to catch a soccer game happening on the "pitch" in Europe and won't stop talking about "transfer rumors" or that new "kit." Then there's the girl who has Google notifications set up for every mention of David Beckham, soccer, and Miami.

Maybe you know someone who's been your friend for four years but when the World Cup is happening becomes your mortal enemy. It's 24/7 soccer, with none of our "normal American" sports sprinkled in. It's soccer all the time.

This person would gladly trade the NBA, NFL, MLB, NHL, and college football for soccer. Life without it would be meaningless, and Sunday mornings would be empty. Forget LeBron versus Jordan. Ronaldo and Messi are the true GOATs. 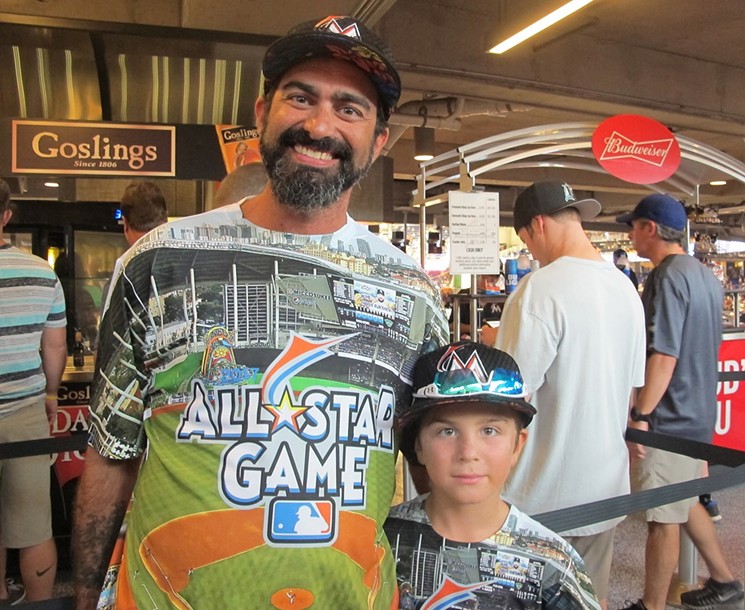 Tim Elfrink
5. Marlins Fan. We all know that one Marlins fan. No, not a Marlins fan — the Marlins fan. This person has never wavered in their love for Miami's baseball team. And, to be honest, it's troubling. There have been times we've wondered if this was like an abusive relationship. The team keeps shitting on this fan by starting over and taking their money. But they just keep rolling with the punches and thanking the team for the Marlins Park food.

But now, as the team starts over once again, this long-con might finally be starting to pay off. Few fans can say they have stuck with the Marlins since the mess that began in 2003. This brand of fan has the receipts, including a hideous closet full of Vegas-like Marlins gear that should never be described to young children.
KEEP MIAMI NEW TIMES FREE... Since we started Miami New Times, it has been defined as the free, independent voice of Miami, and we'd like to keep it that way. With local media under siege, it's more important than ever for us to rally support behind funding our local journalism. You can help by participating in our "I Support" program, allowing us to keep offering readers access to our incisive coverage of local news, food and culture with no paywalls.
Make a one-time donation today for as little as $1.