Gnarled wires, rubble, and a crushed can of pear nectar mark the entrance to Edukos, a homey Venezuelan tavern in Little Havana. Inside, John Guilarte, the restaurant's freckled 34-year-old owner, desperate for his first customer of the night, anxiously wipes down the bar counter.

In May, when he opened Edukos at 1701 W. Flagler St., Guilarte expected at least 75 to 80 customers a week. Soon, he realized, business on Flagler Street would be unbearably slow. Solemnly, he points toward the front door. For the past five months, it's been blocked by a barricade of backhoes, orange pylons, and gravel.

“The construction is like a blinder. People passing by just don’t see us,” Guilarte explains. "We've got a five-star rating on Yelp, but without the foot traffic, we're clawing and scratching for just 50 customers a week — sometimes less." 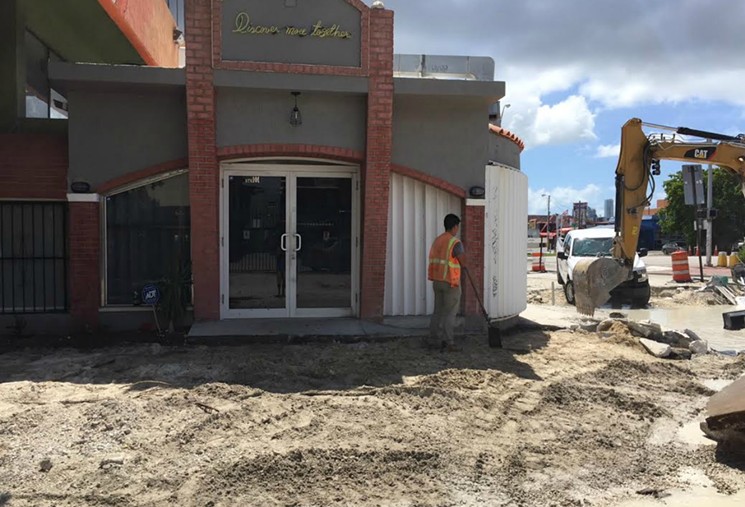 Courtesy of John Guilarte/Edukos
Two years ago, the Florida Department of Transportation (DOT) promised to replace Little Havana's decrepit 75-year-old water mains, crumbling sidewalks, and outdated traffic signals. Though contractors began the project, they repeatedly announced delays in the schedule, resulting in half-paved wastelands of gravel, debris, and storm water. Trapped in a massive construction zone, small businesses in the neighborhood began losing customers, revenue, and staff. Within two years, dozens were forced to shut down, while those that survived are hanging on by a thread, owners say.

Guilarte grew up with his mother's hearty Venezuelan home cooking in Orlando, where he often sampled her arepas, empanadas, and pastichos. Two decades later, he earned an MBA at Florida State University and began working as a brand strategist for beer distributors across the state. "I never could forget the taste of my mom's café con leche, though," he says.

Inspired, the young entrepreneur opened a Venezuelan gastropub and settled in Miami's predominantly Cuban community. "In Miami, there are two iconic neighborhoods that you can't change — Wynwood and Little Havana — and I already knew I couldn't afford Wynwood."

Our first customer! Our buddy Alex from @jwakefieldbeer showing us love

By the time he'd found the perfect location for his restaurant — a two-level spot on the corner of NW 17th Street and West Flagler, just a block from Marlins Park — Guilarte had already spent four years and $65,000 on branding, trademarking, and publicity. "It was my life savings," he says of the down payment and rent.

At the time, he'd been assured the construction surrounding his property would be completed within three months. Instead, it dragged into the summer and fall.

Courtesy of John Guilarte/Edukos
On more than one occasion, Guilarte says, he'd arrive at the restaurant to find inches of water flooding it or the front sidewalk reduced to a rocky ditch without warning. "I'm trying to bring some light to Little Havana, but [the contractors] are making it a fucking challenge," he says. "I can't even serve brunch or lunch — there's no point. It's hard enough getting customers to come in for dinner."

Even so, Guilarte says he's done his best to adapt to the dire circumstances. He's already cut prices on his menu and thinned his staff of eight to four. He even asked his chef to stand outside and wave the restaurant's banner before Marlins games.

Unfortunately, these adjustments have had little effect, Guilarte says. Few pedestrians venture down the dusty and perilously unpaved street in the first place. "Flagler used to get 30 to 40 people walking down in an afternoon, but with this construction..." he trails off. "Just imagine the moms with their baby carriages, old ladies with little walkers, and old Spanish abuelos trying to cross this road — they'll fall into a hole!"

Courtesy of John Guilarte/Edukos
As a result, Guilarte has resorted to communicating directly with DOT officials, as well as contractors on the ground. Nonetheless, their response, he claims, is usually as disheartening as the view outside his window. "Individual contractors are often spread [thinly] across multiple incomplete projects, [plus] they regularly blame construction delays on bad weather or the Marlins being in town," Guilarte says, frustrated. "There's just no merit to their excuses." DOT spokesperson Sergies Duarte declined to comment.

"There's no accountability for this laziness," Guilarte says.

A block away, James Chanying, the 34-year-old operator of his family's Sunflex gas station, agrees: "It's like a war zone or a no man's land out there. It's cosmetically disgusting."

Decades ago, Chanying's father bought the gas station in the hopes it would provide financial security for his children. But now, with rubble, dirt, and tractors blocking half of the road's lanes and two of the gas station's major entrances, business has dropped from $2,000 per week to less than half of that. "My retired father even had to reinvest in the gas station for it to survive, but that's not how a business should work. You're supposed to take money home, not reinvest capital."

Chanying was even forced to shut down the gas station's lucrative side gig, a fully staffed car wash. "There used to be lines of cars waiting, but with all the dust kicking up from the dirt road, no one came. If they did, they'd enter dirty and leave dirty."

Nonetheless, he says he's seen other businesses hit harder. In particular, a mechanic down the street recently closed his shop because of major revenue losses. "Who's going to drive in their broken car through all those rocks and dirt?" Chanying says. "It doesn't make any sense."

Courtesy of John Guilarte/Edukos
Chanying says he and the Sunoco gas station operator across the street have been keeping prices steady with each other so as not to create an unfair advantage. "It's a nightmare scenario, but at least we sell gas, something everyone needs. What will happen to the little barbershop, pizzeria, or restaurant when there's no more foot traffic?"

Anguished, Chanying says he's even begun to believe conspiracy theories suggesting the state is trying to eliminate Little Havana's mom-and-pop businesses, open up land to larger developments, and gentrify the neighborhood. "It certainly feels malicious," he says. "Maybe contractors get paid to take their time to finish a project. By the time it looks beautiful, the next renters can come in and buy the property cheap."

Courtesy of John Guilarte/Edukos
Regardless, Guilarte says he's been drafting a petition to be sent to state representatives and collaborating with Calle Ocho resident Alfie Leon, who's running for city commissioner.

"I got involved in this because my favorite businesses were getting affected, like where I got my gas and where I got my pastelitos," Leon says. "This construction has been pushed down these people's throats, and if it [were] any other community, they would have been treated with more equity and equality."

Guilarte agrees: "We need to raise hell. This cannot be our 'normal.'"

Photo by Isabella Gomes
KEEP MIAMI NEW TIMES FREE... Since we started Miami New Times, it has been defined as the free, independent voice of Miami, and we'd like to keep it that way. With local media under siege, it's more important than ever for us to rally support behind funding our local journalism. You can help by participating in our "I Support" program, allowing us to keep offering readers access to our incisive coverage of local news, food and culture with no paywalls.
Make a one-time donation today for as little as $1.