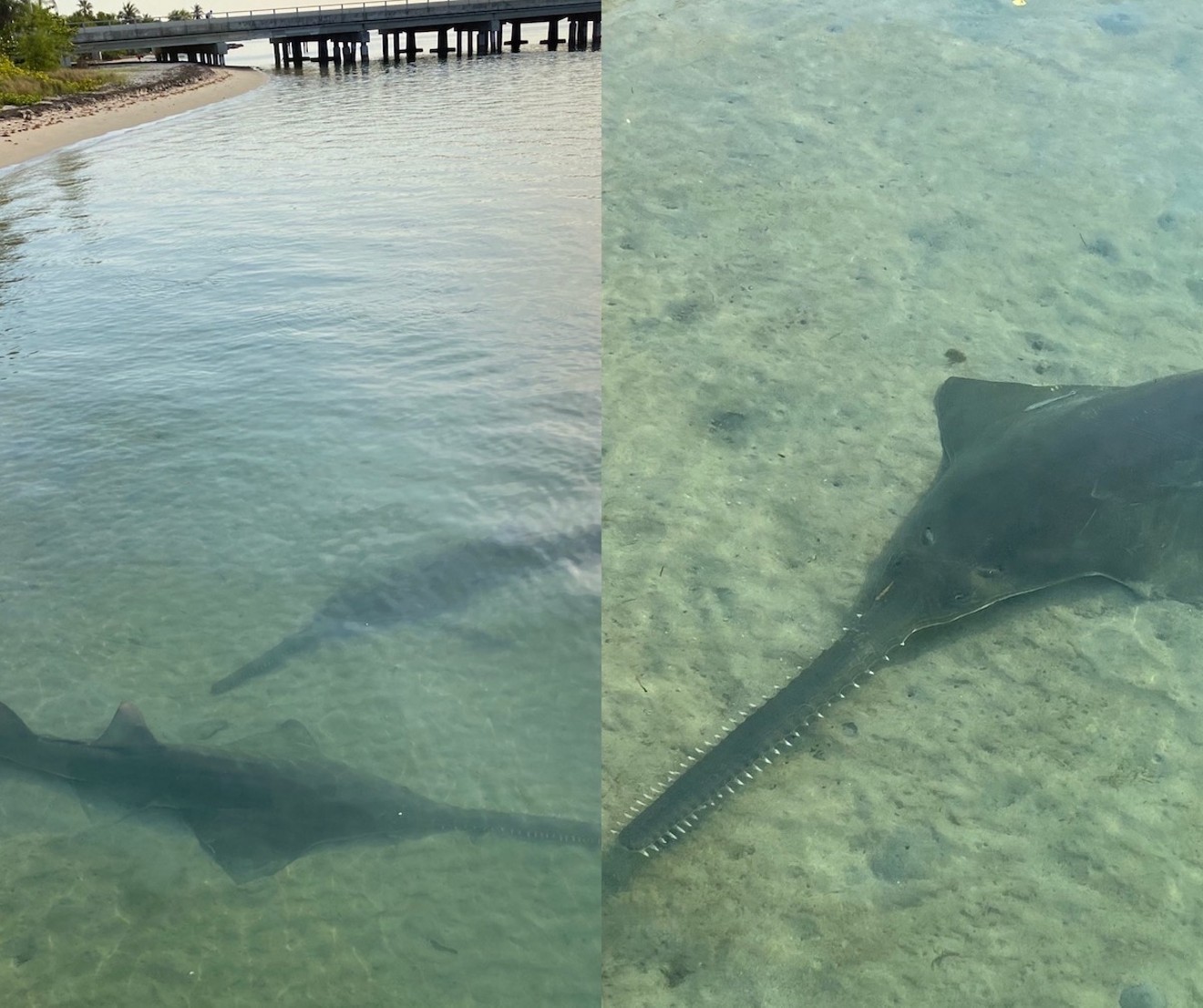 Allyson DeMerlis spotted two critically endangered smalltooth sawfish near Virginia Key on April 9, 2022. Photos courtesy of Allyson DeMerlis
On Saturday morning, Allyson DeMerlis and her roommate were hanging out by the dock at the University of Miami Rosenstiel School of Marine and Atmospheric Science (UM RSMAS) on Virginia Key when a large fish swam into the clear, shallow water nearby. And then another passed by.

These weren't creatures DeMerlis had ever seen before in Biscayne Bay — or anywhere, for that matter. They were, to her surprise, a pair of critically endangered smalltooth sawfish. She quickly snapped photos of the prehistoric-looking fish — one of them appears to be showing off its chompers — and shared one on Twitter. As of Monday evening, the image had garnered close to 12,000 likes and dozens of responses from excited researchers and Miami residents.

"It was a really rare occurrence, so yeah, I freaked out." DeMerlis, a UM RSMAS graduate student, tells New Times.


Today I saw two sawfish in the wild!!! pic.twitter.com/kNmmDPKHaA

Aside from being objectively cool, scientists say the encounter sparks hope for the smalltooth sawfish and the habitat they were spotted in, given the pollution crisis affecting Biscayne Bay and the rarity of the species.

Since the 1900s, U.S. populations of smalltooth sawfish — named for their bladelike snout, which is lined with sharp teeth — have decreased by an estimated 95 percent, thanks to a combination of overfishing, being caught in fishing gear, and habitat loss. In 2003, the smalltooth sawfish became the first marine fish to receive federal protections under the Endangered Species Act. Though the species is often compared to sharks, it's part of the Rajidaemore family, meaning it's more similar to other flattened fish, like rays and skates.

Given the creatures' documented timidity and Biscayne Bay's issues with fish kills, seagrass die-offs, and run-off pollution, Rachel Silverstein, executive director of Miami Waterkeeper, a Miami-based nonprofit that advocates for South Florida's waterways and wildlife, was surprised to hear about the recent sawfish sighting in Miami.

In a phone call with New Times, Silverstein says the encounter is a testament to the fact that nature can recover if given the opportunity.

"It was a sign of hope," Silverstein says. "It gave everybody a lot of joy knowing that these rare creatures are out there, and they are hopefully reproducing and thriving out in Biscayne Bay."

In response to DeMerlis' tweet, Neil Hammerschlag, a shark scientist at UM, suggested that the sighting might signal a recovery of the endangered species.

"This is awesome!" Hammerschlag tweeted. "Perhaps more signs of recovery of these critically endangered species."

(It's worth noting that a man roughly 200 miles north in Cocoa Beach caught and later released a 13-foot-long smalltooth sawfish on Saturday, too.)

A 2020 study authored by Hammerschlag and other scientists with UM RSMAS and the National Oceanic and Atmospheric Administration (NOAA) found a growing number of smalltooth sawfish populations off the coast of Miami — a previously unheard-of phenomenon.

DeMerlis reported her sighting to Miami Waterkeeper, and Silverstein says they shared the news with NOAA and Florida Fish and Wildlife Conservation Commission.

The last time Miami Waterkeeper received reports about smalltooth sawfish was in April 2020, at the beginning of the pandemic, when a resident filmed two of the creatures swimming near Margaret Pace Park. Silverstein says it was believed to be the first time a pair of the species were filmed together in that part of Biscayne Bay.

Silverstein believes the two sawfish recently seen in Miami were most likely a mating pair, given their closeness, but she can't say for sure.

Still, the sight of the two swimming together is enough to leave her feeling optimistic.

"Hope for baby sawfish!" she exclaims.
KEEP MIAMI NEW TIMES FREE... Since we started Miami New Times, it has been defined as the free, independent voice of Miami, and we'd like to keep it that way. With local media under siege, it's more important than ever for us to rally support behind funding our local journalism. You can help by participating in our "I Support" program, allowing us to keep offering readers access to our incisive coverage of local news, food and culture with no paywalls.
Make a one-time donation today for as little as $1.