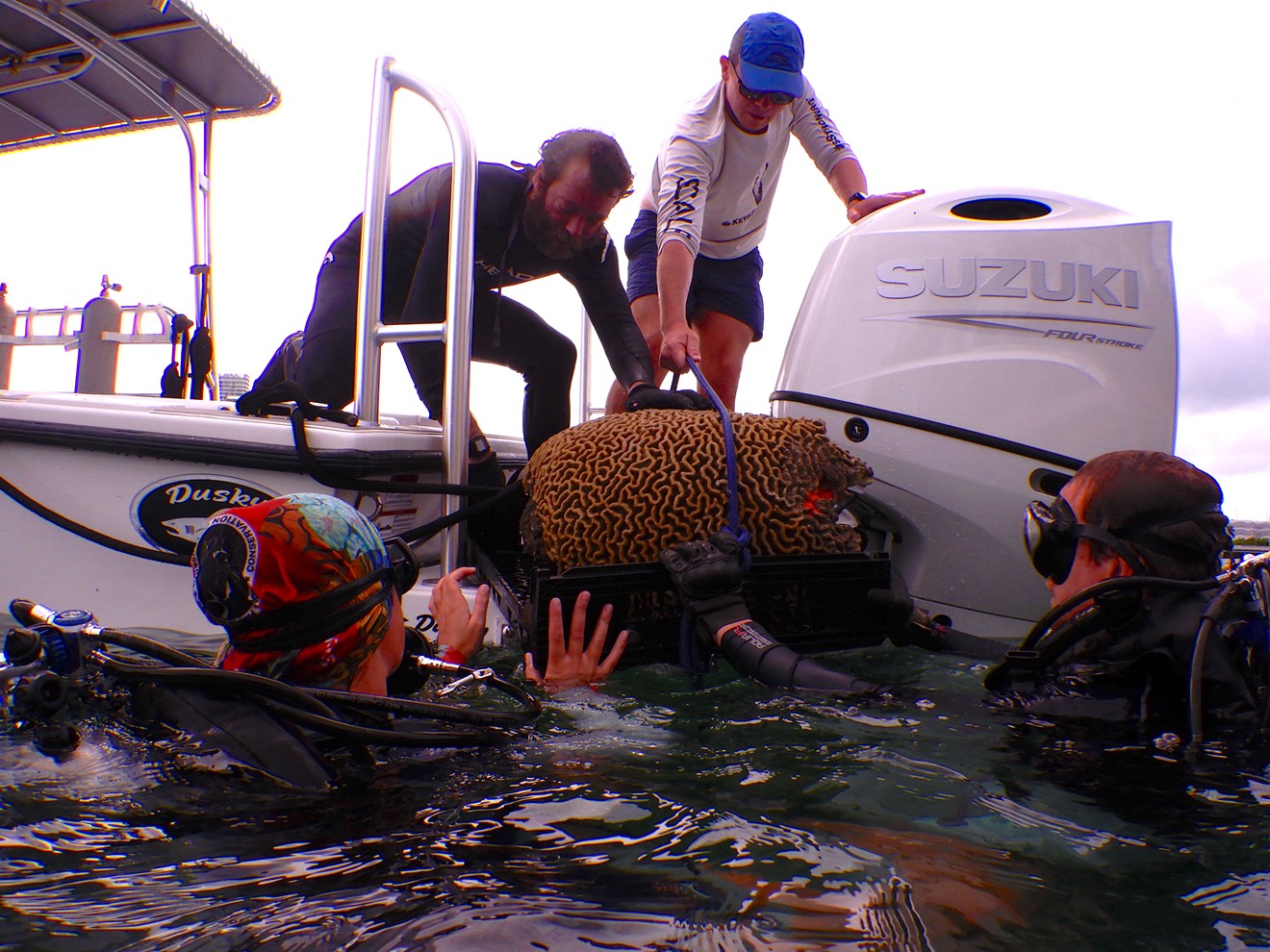 Coral researchers from the University of Miami and NOAA rescue corals after a seawall collapsed off Star Island. Photo by the National Oceanic and Atmospheric Administration (NOAA)
In the waters of Biscayne Bay around Star Island, colonies of resilient coral that thrive on manmade concrete structures have caught the attention of marine biologists, who believe the unique specimens could help unlock the secret to protecting coral struggling to survive in the natural ecosystem.

"It's like Miami is its own living laboratory," says Colin Foord, a marine biologist and cofounder of the conservation initiative Coral Morphologic.

Foord discovered the impressive marine life when pop star Gloria Estefan's son Nayib asked him to survey the habitat on the seawall behind their luxurious estate on Star Island. Foord saw a stunning variety of fish and coral that he never expected to live in and around the bay.

“Right next door, at the bottom of that seawall, it created one of the most amazing kinds of examples of how a coral reef forms,” Foord tells New Times. "You had like 100 years of concrete junk in the water, and then you had these corals basically cementing all of these pieces of humanity together. It’s almost like going into the future 300 years and seeing [what] Miami might look like underwater."

That visit led to a partnership between Foord and coral researchers from the National Oceanic and Atmospheric Administration (NOAA) and the University of Miami (UM) with the aim of better understanding why this coral in manmade environments is more resilient than typical offshore coral. In 2010, the so-called super coral survived Miami’s coldest January since 1940 while many of its offshore counterparts died.

The destruction was extensive, but researchers were able to salvage 43 coral colonies. The colonies were transported for assessment at NOAA and at UM's Rosenstiel School of Marine, Atmospheric & Earth Science on Virginia Key. The scientists intend to bring some of the coral to the nursery in PortMiami where the Coral City Camera is located.

"It was lucky that we were able to spot it when we did and that we had teams in place to be able to go out and rescue what was left because maybe a quarter of [the colonies] showed signs of stress and partial mortality," Michael Studivan, a coral expert and researcher at UM and NOAA, tells New Times. "If they had been left any longer in that area, they might have died entirely."

Studying the so-called super coral has become all the more essential given that many offshore coral colonies are near extinction because of climate change, warming ocean temperatures, and stony coral tissue loss disease. The urbanized corals remain mostly unaffected by the disease, which is decimating reefs all around Florida and the Caribbean.

"They remain almost our last genetic stock of corals in the area and so it's important to both conserve these populations but also to start incorporating these corals into active restoration," Studivan says. "If we can protect them in their native habitats and use them to reseed offshore reefs, we have a better chance of having coral reefs in the future in Miami."

Both Foord and Studivan emphasize a need for improved communication between coral researchers and regulatory partners such as the Florida Fish and Wildlife Conservation Commission so that a rapid response protocol can be in place for the next event that could potentially harm coral colonies.

Three research groups from UM and NOAA are designated as coral nurseries with permission to rescue corals.

"This really highlights that there’s a need for an organization to be really vigilantly monitoring and keeping track of where these urban corals are so that when there are future projects — there’s a plan rather than kind of just crossing our fingers and hoping that something doesn’t happen," Foord says. "If peregrine falcons or bald eagles were nesting in downtown Miami, it would be a thing we would know. But when it's underwater, it's easy to be out of sight, out of mind."

At the time of the Star Island seawall collapse, property owners were performing an excavation to shore up the structure. The aging wall fell forward, likely because of heavy rainfall in early June, in combination with destabilizing effects from the excavation. Tere Florin, a spokesperson for the Miami-Dade Department of Regulations and Economic Resources, confirmed to New Times that a permit for the installation of a new seawall had been issued earlier this year.

"It hasn't been any secret that the seawall at this particular property has been in a state of disrepair for some time where we've seen cracks and some subsistence in parts of the seawall," Studivan says. "We had all always kind of assumed that it was bound for some type of damage over time."

A collapse of this nature, Studivan says, is likely to happen again, given that many of the city's seawalls are approaching 100 years old.

The Star Island seawall still has not been repaired, according to the Miami-Dade Department of Environmental Resources Management. On June 6, two days after the collapse, the county issued a notice of noncompliance that gave the permit holder 48 hours to remove the collapsed seawall and implement measures to prevent further erosion. The property owners have yet to comply and have been cited with civil violations, the department says.

Although the owners forfeited the $3,000 mitigation bond for the damage, Studivan says ecological education might be more fruitful than setting an arbitrary price on future coral loss.

"The biggest thing that needs to happen is education about what kind of organisms are living in our backyards," Studivan explains. "If people understand that some of the structures that they have on their property are home to some endangered species and species of high importance for persistence of reefs in the area, there's natural mitigation in that."
KEEP MIAMI NEW TIMES FREE... Since we started Miami New Times, it has been defined as the free, independent voice of Miami, and we'd like to keep it that way. With local media under siege, it's more important than ever for us to rally support behind funding our local journalism. You can help by participating in our "I Support" program, allowing us to keep offering readers access to our incisive coverage of local news, food and culture with no paywalls.
Make a one-time donation today for as little as $1.