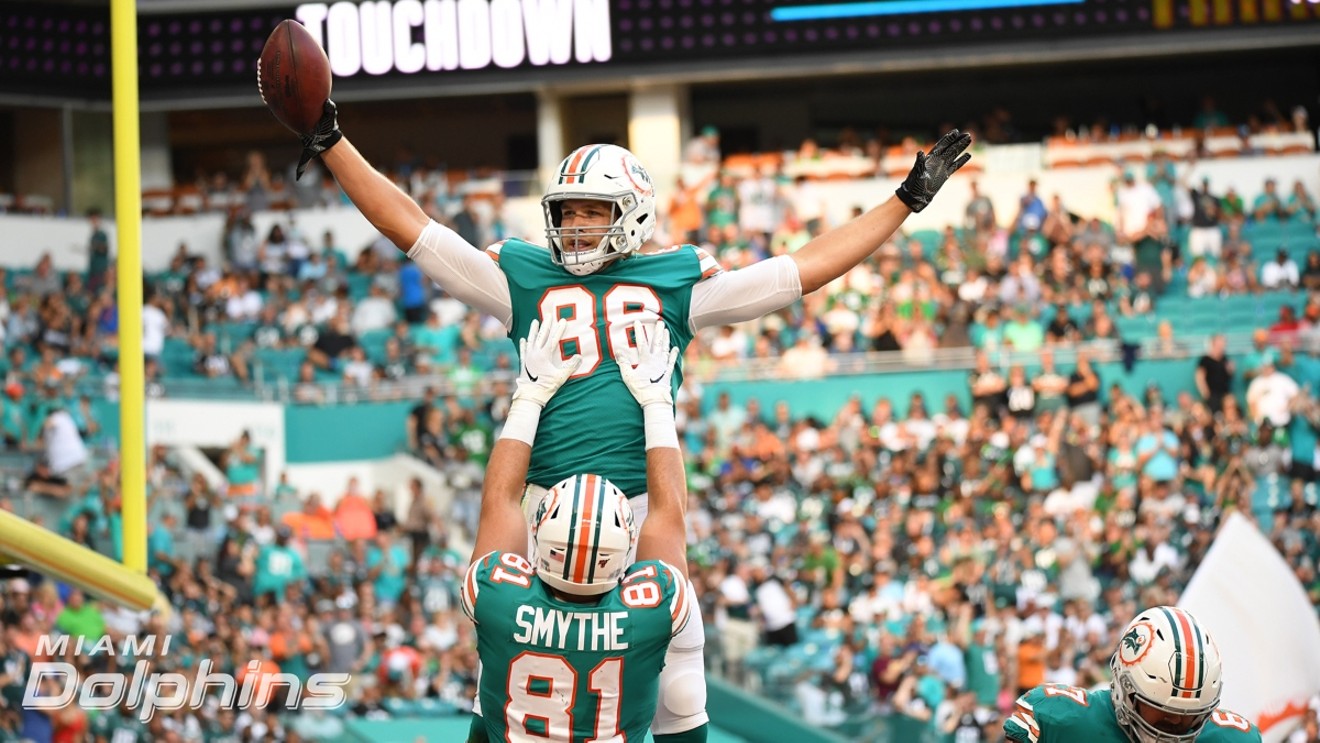 Miami Dolphins tight end Mike Gesicki Photo courtesy of Miami Dolphins
The story of the Miami Dolphins' 19-7 win over the Cincinnati Bengals on Sunday has been, and rightfully so, about the incredibly successful return of quarterback Tua Tagovailoa after an injury. The Dolphins rookie quarterback had a career day, finishing with 296 yards passing and one touchdown. More importantly, Tua still has yet to throw an interception in his career.

Tua was fantastic, but forgive Dolphins fans if they're still buzzing today about something else: an incredible catch tight end Mike Gesicki made in the third quarter of the win. It was the talk of social media after it happened and deserves its own space on the internet so it can live the happy life it deserves.


hang it in the louvre pic.twitter.com/21Y7tALG5K

what a CATCH from Mike Gesicki pic.twitter.com/bzNL97LB5W

Gesicki should be the new @NFL logo pic.twitter.com/IYV7kwC0Hk

I don't care who you are — that's just sexy. Watching this catch in real-time made you question your eyesight.

Besides mastering one of the sickest catches you'll ever see on a football field, Gesicki had himself an absolute day in the Dolphins' win, finishing with nine catches for 88 yards and a score. The touchdown put the Dolphins ahead in the third quarter and ended up being the difference-maker in the game.


tua to gesicki to take the lead. pic.twitter.com/iDk0lDGVoP

Now that we've spent the requisite amount of time drooling over Mike Gesicki's catch, we can focus on what Tua Tagovailoa did in his return from a thumb injury.

After missing one game, Tua came back and had his best game as a pro so far.


I know stats don’t always tell the story, but Tua Tagovailoa so far:

He has a lot for learn, but I’d sign up for that start to a career every day.

tua’s 26 completions ties the rookie record set by ryan tannehill in 2012. his five games without an interception ties jay fiedler as the longest streak in @miamidolphins history—regardless of experience.

it might not be perfect, but tua tagovailoa is setting records in miami. pic.twitter.com/KjsiHvn76y

After a couple of subpar outings, with a benching against the Denver Broncos mixed in, Miami's future at the most important position in sports had himself a question-answering day. He's the guy. No more "Ryan Fitzpatrick should start" debates required.

The win was crucial, moving the Dolphins to 8-4 on the season before they enter a monumental matchup against the reigning Super Bowl champions, the Kansas City Chiefs, next Sunday.
KEEP MIAMI NEW TIMES FREE... Since we started Miami New Times, it has been defined as the free, independent voice of Miami, and we'd like to keep it that way. With local media under siege, it's more important than ever for us to rally support behind funding our local journalism. You can help by participating in our "I Support" program, allowing us to keep offering readers access to our incisive coverage of local news, food and culture with no paywalls.
Make a one-time donation today for as little as $1.