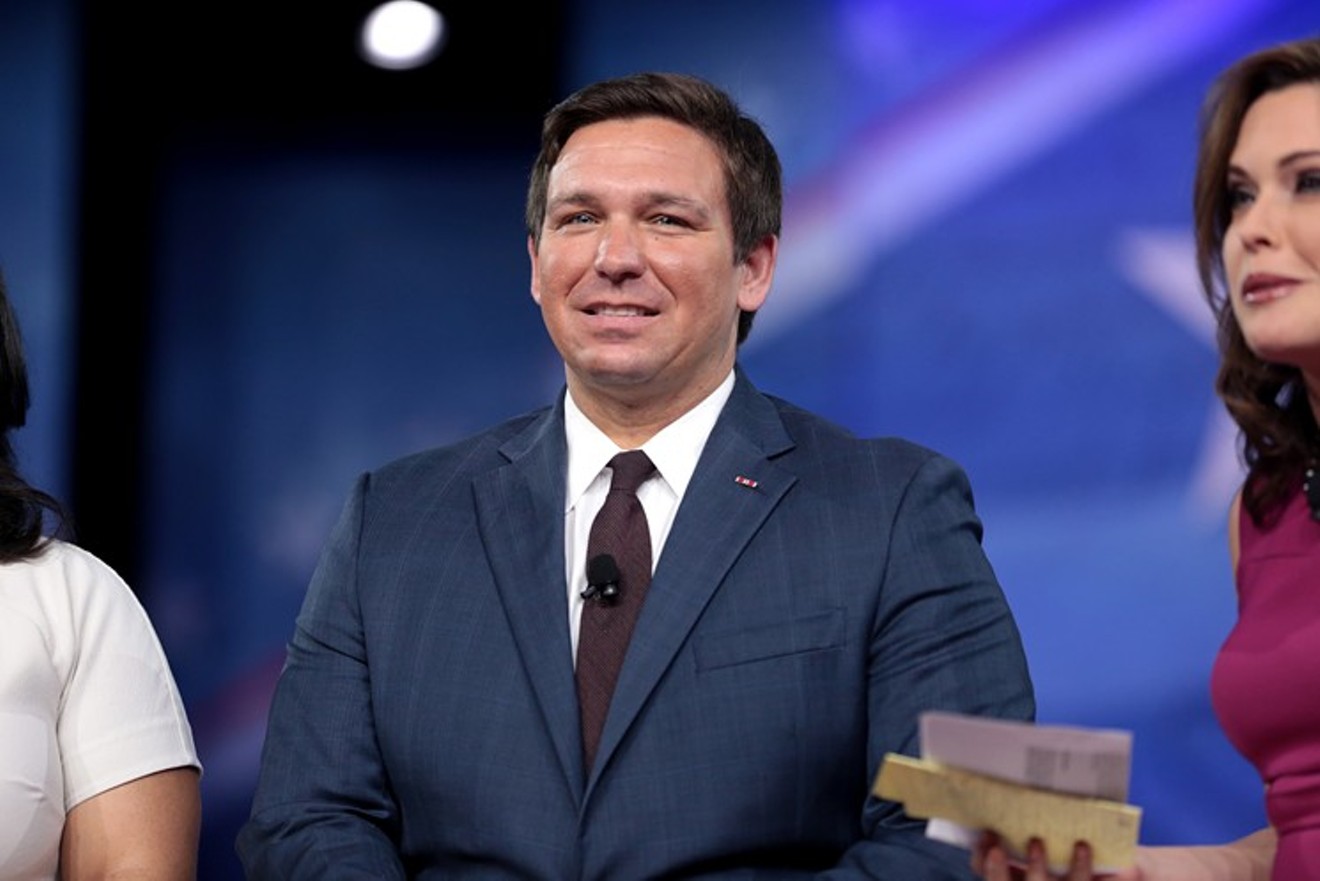 A Fox spokesperson told the Times that they had booked DeSantis for an interview with Fox & Friends but did not know there would be a live bill signing. They also did not mandate exclusivity for Fox News, the spokesperson said.

When Florida reporters stood outside of the Hilton at Palm Beach International Airport this morning, ready to cover Gov. Ron DeSantis' signing of a controversial voting-rights bill, they were told that media outlets would not be permitted inside. As it turned out, DeSantis had given exclusive access to a TV network that has been friendly to his party and to the bill: Fox News.


Confirmed: @CBS12 News is not allowed into the event where @GovRonDeSantis will sign a controversial elections bill into law, per @MadelineTV who is outside.

We were a pool camera, assigned to feed this event to affiliates nationwide.

Now, the only camera will be Fox News

While reporters from local outlets like the Sun Sentinel and national TV networks like CBS News were stopped at the door, hundreds of supporters of the Republican governor and of former President Donald Trump were allowed inside. Some flew flags outside the venue that said "DeSantis 2024" and "Trump DeSantis 2024," a nod to the swirling rumors that DeSantis might make a run at the White House in the next election cycle. Meanwhile, the Fox News show Fox & Friends, of which DeSantis is a frequent guest, had the only cameras inside the event.

The move by DeSantis to limit the Florida press corps' access to the ceremony quickly drew anger from politicians, journalists, and civil-rights activists alike. Several unholstered the term fascist to characterize the choice to give an exclusive to a news outlet that aligned with his conservative politics when it came to covering a controversial bill that will restrict voting access in Florida.


If you wanted to know what fascism looks like... https://t.co/L5XY8aDFgg

This is how fascists operate

The legislation signed by DeSantis, Senate Bill 90, will set a series of limits and restrictions on future elections in Florida.

Organizations that register people to vote and are not affiliated with the Florida government now have stricter requirements and are subject to fines for each person they register if they don't turn registrations in to the proper supervisor of elections within 14 days of an applicant's signing.

Under the new law, Florida voters must request mail-in ballots on a more frequent basis, and they can only turn in those ballots at a ballot drop box if the box is monitored in person by an employee of the Supervisor of Elections. Drop boxes can now only be used during limited hours, rather than 24/7. (Previous versions of the bill sought to ban drop boxes altogether.)

The bill, while intensely scrutinized, has been pushed by DeSantis and other Florida Republicans who decried the use of vote-by-mail and ballot drop boxes during the 2020 election season, claiming they were tools for potential voter fraud.

Critics, meanwhile, have called the bill a partisan measure and a means of voter suppression that will disenfranchise younger voters, seniors, and voters of color. Some civil-rights groups filed lawsuits against the state only moments after DeSantis signed the bill into law.

Florida journalists on social media slammed DeSantis for preventing them from covering an event that was consequential to a broader audience than that of Fox News. On Twitter, Emily Bloch, president of the Florida Society of Professional Journalists, condemned DeSantis' actions, characterizing it as a defiance of the principles of a free press.

"Signing a law into office isn't supposed to be an 'exclusive,' since the law itself isn't exclusive," she wrote.


My statement for @SPJFla: “Signing a law into office isn’t supposed to be an ‘exclusive,’ since the law itself isn’t exclusive. Actions like this openly defy against a free press. We condemn DeSantis’ office barring journalists from doing their job for the sake of good TV.” https://t.co/P4sZTFKopK

It's unclear whether DeSantis may have violated Florida's open-government statute by barring journalists from the bill signing. Under the state's Sunshine Law, all meetings of any board, commission, or state agency where official acts are to be carried out are to be open to the public, and by extension, the press. While there's some argument among Florida political insiders about whether bill signings, which are largely ceremonial, are subject to the statute, writers like Sun Sentinel deputy opinions editor Dan Sweeney criticized DeSantis for turning the event into a Fox News exclusive.

"It's not a meeting of a board or commission.... DeSantis could sign this bill while sitting on the john if he wanted to," Sweeney tweeted. "But he's instead decided to turn it into a self-aggrandizing propaganda event filled only with fawning, obsequious toadies."


It's not a meeting of a board or commission, though. DeSantis could sign this bill while sitting on the john if he wanted to. But he's instead decided to turn it into a self-aggrandizing propaganda event filled only with fawning, obsequious toadies.

As the Miami Herald pointed out, the voting bill is the latest in a string of legislative actions supported by DeSantis — including his "anti-riot" bill and suspension of COVID-19 restrictions — that appeal less to the issues of his state and more to a nationwide Republican agenda that emerged after the 2020 election.

In an opinion piece for the Herald, Florida Agriculture Commissioner Nikki Fried, a Democrat widely seen as an aspirant to the governor's mansion, said she believes the elections bill and other moves by DeSantis are part of the governor's arc toward authoritarianism.

"Under DeSantis' 'regime,' if you don't support him or his party, he wants to stop you from voting. If you disagree with him, he'll use his authority to silence you. And if you dare protest and speak out, be prepared to end up behind bars," Fried wrote.
KEEP MIAMI NEW TIMES FREE... Since we started Miami New Times, it has been defined as the free, independent voice of Miami, and we'd like to keep it that way. With local media under siege, it's more important than ever for us to rally support behind funding our local journalism. You can help by participating in our "I Support" program, allowing us to keep offering readers access to our incisive coverage of local news, food and culture with no paywalls.
Make a one-time donation today for as little as $1.