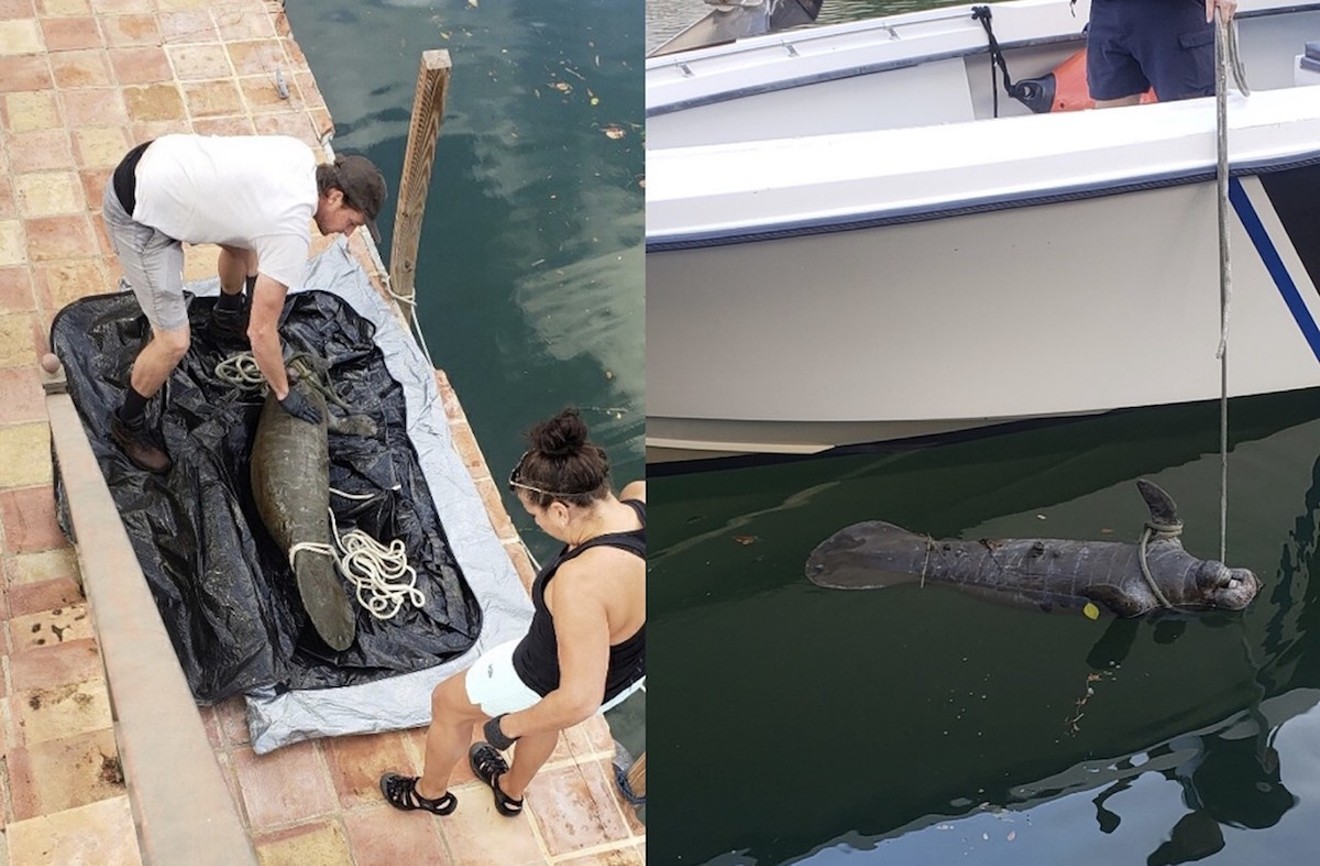 But lately, the only manatees Pezzatini can recall seeing along the eight-mile waterway have been dead ones. Only a year ago, New Times spoke with Pezzatini after she and her dad found the corpse of a juvenile manatee in the waterway behind their home.

"In the past year, I haven't really seen any live manatees swim by," she says.

Her most recent sighting came this past Saturday, morning when she spotted a small, lifeless manatee floating belly-up.

It's unclear how this particular manatee died. When Pezzatini and other neighbors called the Florida Fish and Wildlife Conservation Commission (FWC), state researchers came out to remove the corpse and conduct a necropsy.

Pezzatini says the baby appeared to be much tinier than the first one she found ⁠— only about four feet long and strikingly thin. FWC researchers told her it had markings indicating it was recently born.

"It was so small," Pezzatini recalls. "It is possible that it was stillborn."

After finding the dead manatee on Saturday, Pezzatini posted photos of its floating corpse on Nextdoor with the caption: "What a disaster. We are going to drive this species into extinction."

In fact, manatees were one of the 78 original species listed as "threatened with extinction" under the federal Endangered Species Act passed in the 1970s. Though their status was down-listed from "endangered" to "threatened" in 2017, Pezzatini's grisly discovery comes on the heels of the deadliest year in Florida for manatees, as the death count eclipsed 1,000.

The recent stats are causing scientists and government officials to reconsider the danger to the manatee: Of the 1,001 deaths recorded last year, 103 were "watercraft-related," seven involved manatees that were crushed or drowned in floodgates or canal locks, and another seven were killed by human-related causes like poaching or rope entanglement. An unprecedented number of manatees are believed to have died from starvation, especially on Florida's east coast, where there's been a drastic decrease in the vegetarian sea cows' main source of food: seagrass.

More than half of the dead manatees were either not necropsied or their cause of death has yet to be determined. Last year, when Pezzatini called the FWC hotline to report the dead manatee she found behind her home, she was told the agency couldn't perform a necropsy on it because it was too decomposed.

While many people responded to Pezzatini's Nextdoor post asking how they could help the struggling species, others made comments that left her "speechless," including one commenter who wished the manatees would disappear so they could "finally speed" in their boats and jet skis.

"People are just so selfish and so ignorant sometimes," Pezzatini says. "But if we don't take care of our environment, if we keep losing species and animals and sources of food, we'll end up disappearing from the face of our earth ourselves."
KEEP MIAMI NEW TIMES FREE... Since we started Miami New Times, it has been defined as the free, independent voice of Miami, and we'd like to keep it that way. With local media under siege, it's more important than ever for us to rally support behind funding our local journalism. You can help by participating in our "I Support" program, allowing us to keep offering readers access to our incisive coverage of local news, food and culture with no paywalls.
Make a one-time donation today for as little as $1.