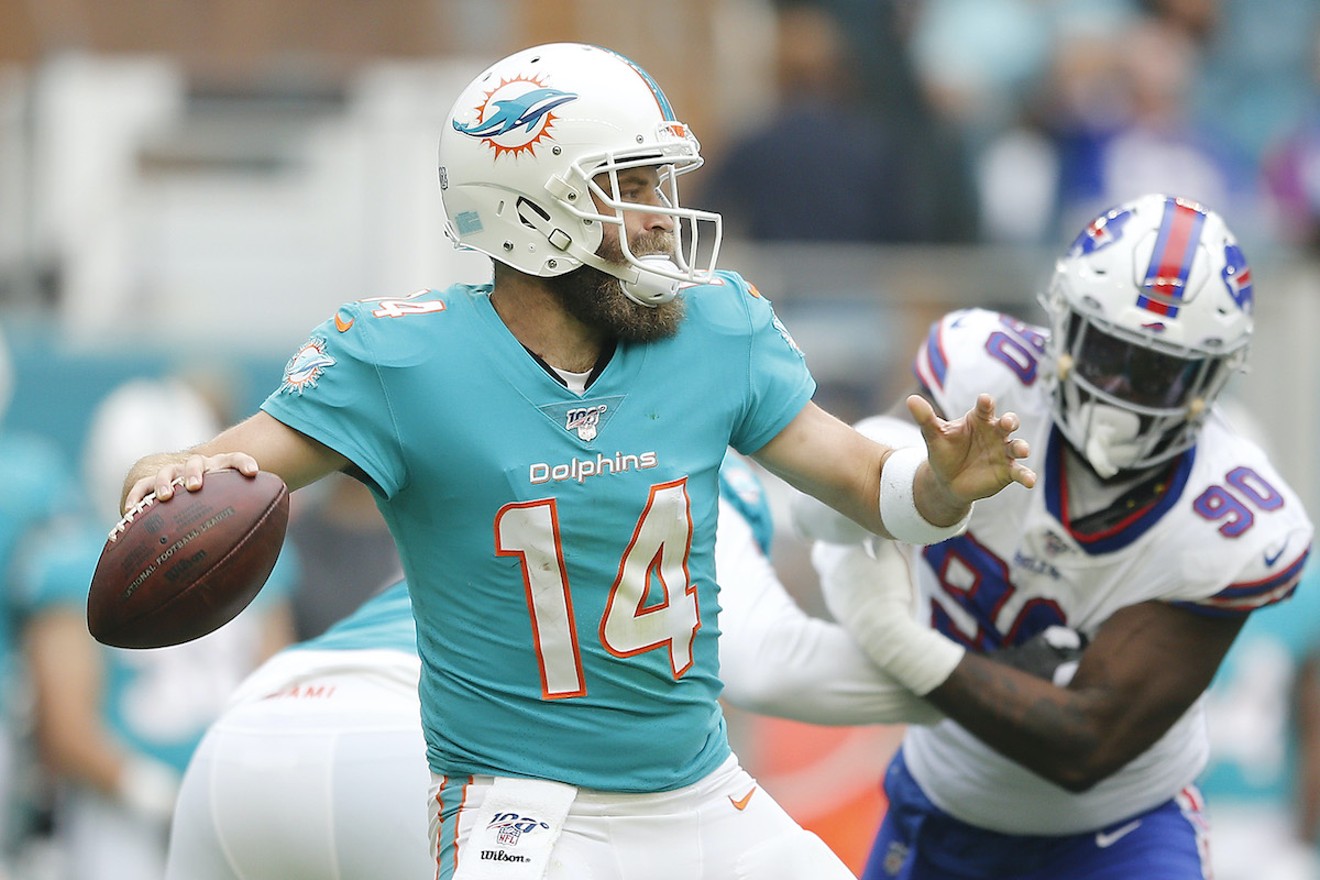 Dolphins quarterback Ryan Fitzpatrick seems like the best blend of survival smarts and entertainment. Photo by Michael Reaves / Getty Images
These days, you have to laugh to keep from crying. The cabin fever that comes with social distancing is real, and it's intensifying as our Netflix queues dwindle.

You're stuck in the house, spending a lot of time with your loved ones. Normally that would be a fantastic thing, but at the moment you'd welcome some outside company, hold the coronavirus. Since most of us are missing our favorite sports stars, we wondered which of our current local athletes we'd most like to be quarantined with. Here are our top picks.
Udonis Haslem. When faced with a terrifying situation in a world unknown, one must run toward the safest place possible: the home of Miami Heat legend Udonis Haslem. UD has lived in Miami his entire life, so he knows the lay of the land. He has connections. I have no sources on this, but I'm willing to bet Haslem could get a pizza, a hammer, a copy of Nintendo Duck Hunt, ammunition, and a dish of only red M&Ms delivered to his home in under 30 minutes in the middle of a Category 5 hurricane. This is the ally I choose.

Haslem is damn cool, too. I bet he has stories for days. There are probably hours of LeBron, Wade, Riley, and other Miami Heat anecdotes but also early-2000s Tricky Daddy/Luther Campbell strip club tales. The hours we need to fill would fly by.
Brian Flores. Miami Dolphins coach Brian Flores might not come off as the cuddliest person to cozy up to under quarantine, but he certainly seems like he'd have a well-thought-out plan and wouldn't take bullshit from anyone who strayed from it. Flores reminds me of Damon Wayans' character in the movie Major Payne: a hard-candy shell with a surprising caramel inside. In a week's time, Flores would be tucking us in at night and singing us bedtime lullabies.

Every household looking to survive and get by needs a leader. The Miami Dolphins' head coach fits the mold. At the very least, he'd make a tremendous bodyguard in an uncertain time.
Chris Bosh. Chris Bosh knows stuff. Lots and lots of stuff. If we're going to be locked in the house for weeks on end, it would be cool to learn something. Bosh could teach us to speak Spanish and show us how to brew our own beer while also giving us guitar lessons. He's been all over the world, so hearing about his Travel Channel-like adventures would fill a lot of time.

Being with Chris Bosh for a couple of weeks would be like going to home-school camp for adults. When we were finally released back into the wild, we'd know how to code, shoot a mean midrange jumper, and write a Wikipedia entry on every artifact in Egypt. We'd likely share a lot of laughs, too. If this was a fantasy-camp package, every Heat fan would pay for it. Sign us up.
Ryan Fitzpatrick. We're quarantined for a reason, people. This is an emergency situation. The zombies aren't coming, but being prepared for whatever the hell is next would be a great idea. Dolphins quarterback Ryan Fitzpatrick seems like the best blend of survival smarts (we're assuming he knows stuff — he went to Harvard) and entertainment, since he's known as one of the funnier guys in the locker room.

In my mind, I see Fitzpatrick leading us all on a hunt for firewood and supplies by day, then at night doing shots of whiskey while working out equations on a whiteboard that will soon save the world. Fitzpatrick also has five kids, so we could play some killer three-on-three football games with him as the all-time quarterback.

The Leonard family. I've maintained for quite some time that Miami Heat center Meyers Leonard and his buckets-getting wife, Ellen, require their own reality show, like yesterday. Besides Meyers' NBA fame, they just seem down to earth. Ellen is the owner of a small business, Level Foods, and isn't shy on social media, sharing a continuous stream of fun posts. The two even have a tradition in which they forgo giving each other Christmas presents and instead use that money to "adopt" cancer patients. I mean, what?!

Meyers seems like the kind of dude who'd have a man cave that includes an assortment of big-kid entertainment. He's a huge gamer, so that's covered. He also seems like the sort of guy who likes to get drunk and talk about weird stuff like, "What was it like to be the first person to figure out you can eat a banana?" and wild shit like that.
KEEP MIAMI NEW TIMES FREE... Since we started Miami New Times, it has been defined as the free, independent voice of Miami, and we'd like to keep it that way. With local media under siege, it's more important than ever for us to rally support behind funding our local journalism. You can help by participating in our "I Support" program, allowing us to keep offering readers access to our incisive coverage of local news, food and culture with no paywalls.
Make a one-time donation today for as little as $1.