In the 1980s, cocaine was ubiquitous in Miami. Hundreds of millions of dollars' worth of yeyo was regularly seized from the airport, while the local drug trade generated $12 billion annually. The morgue became so jam-packed that the coroner's office had to rent a refrigerated truck from Burger King to fit all the bodies.

Back then, though, people were likelier to die in drug-related murders than overdoses in Miami-Dade County, which averaged about two cocaine deaths per month. These days, the overdose toll is much higher: Last year, an average of 36 cocaine users died per month, for a grand total of 439 cocaine-related deaths in 2016.

Though the local numbers are startling, the commission's report shows the rest of the state is also struggling with rising deaths due to overdoses involving cocaine and heroin. After a steady climb in the mid-'00s, cocaine deaths began to fall in 2007, only to sneak back up again: Florida Medical Examiners Commission
In all, the commission found that cocaine caused more deaths than any other drug in Florida last year.

Experts say more people are overdosing simply because more cocaine is being trafficked through the state. The increasing quantities of the drug have also driven prices down, making it cheaper to buy.

“What you’re seeing in the medical examiner data is a direct result of the increasing supply of cocaine,” Justin Miller, Miami's DEA intelligence chief, recently told the Sun Sentinel. “Unfortunately, we are seeing the consequences of having that much cocaine coming into our region.”

Heroin deaths, though less common than those from cocaine, have spiked even more precipitously. Since 2011, the number of people who've died with heroin in their system grew from 56 to 1,023. Year over year, deaths caused by heroin increased 30 percent from 2015 to 2016: 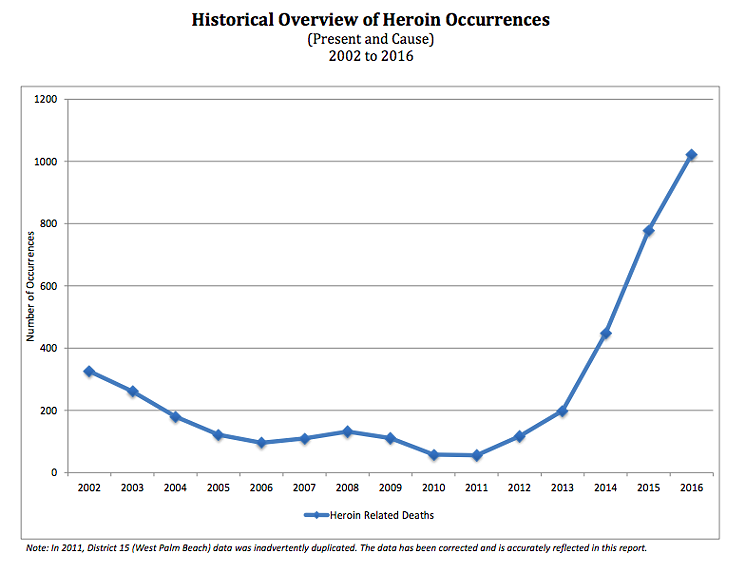 Florida Medical Examiners Commission
Miami-Dade accounted for more than 13 percent of those deaths. Heroin abuse, the natural progression of the state's lingering opioid crisis, has become so prevalent that City of Miami commissioners have discussed suing pharmaceutical companies to recoup the costs of treating overdose patients.

For now, though, experts see no sign of the epidemic slowing: A recent analysis by STAT shows as many as a half-million people might die from opioids, including heroin, over the next decade.