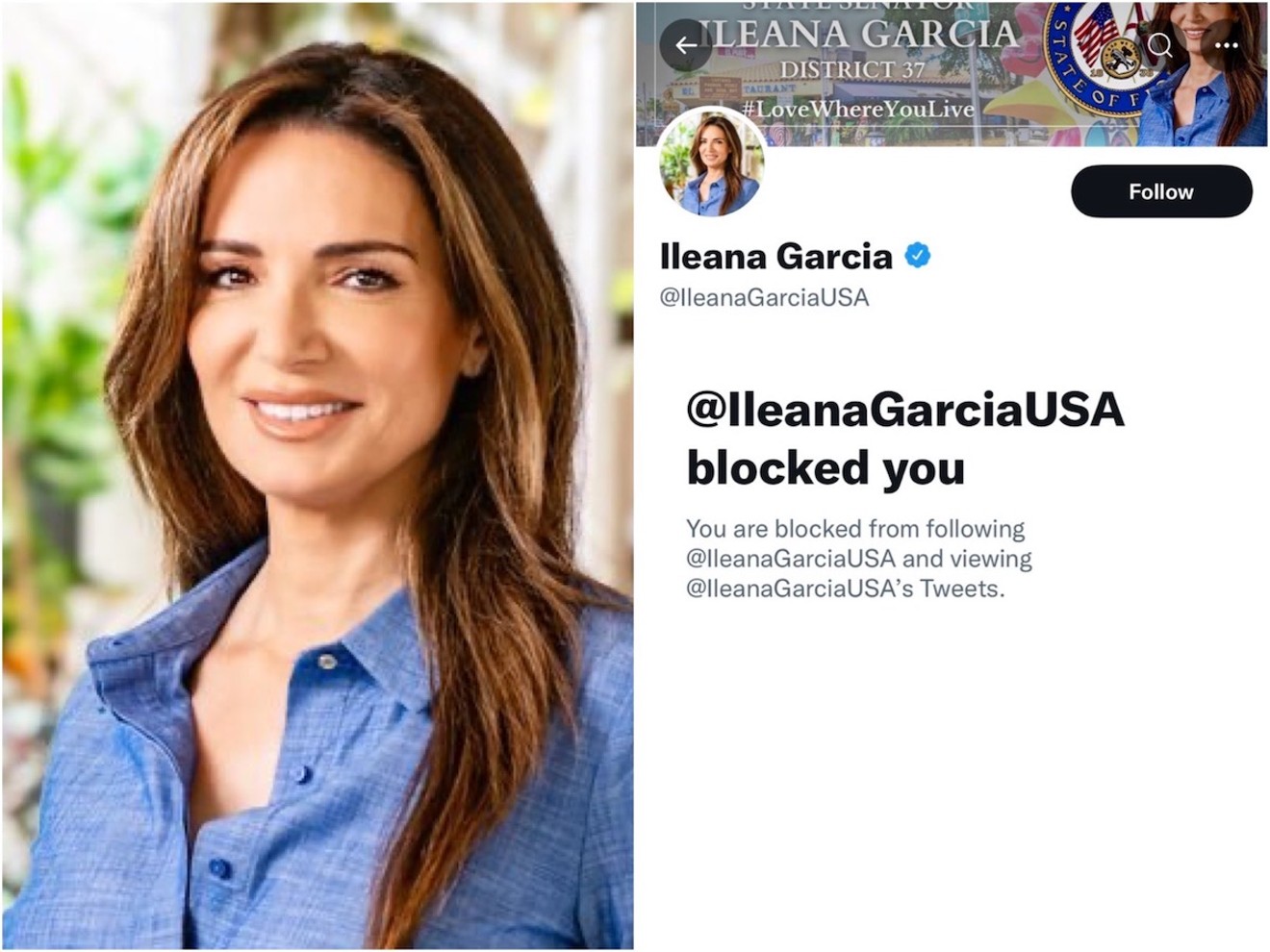 The ACLU says it's unconstitutional for elected officials to block constituents who criticize them. Screenshots via @IleanaGarciaUSA/@AaronParnas on Twitter
As a constituent, you want to be heard by your elected officials. But what happens when they block you on social media?

That's the situation Miami attorney Aaron Parnas has found himself in after being blocked on Twitter by Republican State Sen. Ileana Garcia. On April 15, Parnas tweeted at Garcia's account, @IleanaGarciaUSA, inquiring about her former campaign manager's alleged presence at the U.S. Capitol riot on January 6, 2021.

Within minutes, Parnas says, he was blocked by the senator.

"I was unsurprised, given the fact that she likes to hide from critics," Parnas — who is the son of Ukrainian businessman and former Rudy Giuliani associate Lev Parnas — tells New Times. "But at the same time, it was disheartening because as a constituent of hers, I would have loved to be able to ask tough questions, or just questions in general."


I am one of Ileana Garcia’s constituents, and I asked her why her campaign manager was at the Capitol on January 6, 2021. This is her response. pic.twitter.com/i7QIywcoQh

Over the years, a number of courts have found that public officials’ social-media accounts constitute public forums — notably a New York federal appeals court that in 2019 ruled that then-President Donald Trump had violated free-speech laws by blocking critics on Twitter. The U.S. Supreme Court has even dubbed sites such as Twitter and Facebook "the modern public square," a place where constituents can "petition their elected representatives and otherwise engage with them in a direct manner."

According to Daniel Tilley, legal director of the American Civil Liberties Union (ACLU) of Florida, it's unconstitutional for Garcia or any public official to block constituents simply because of a "distaste for, or disagreement with, their views."

"Constituents should be able to ask questions of their representatives without being dismissed, blocked, or ignored in the process," Tilley writes in a statement to New Times. "Elected officials should value the rights of constituents who wish to keep them accountable and have their voices heard."

Parnas lives in Brickell, which is part of Garcia's District 36 which encompasses parts of Miami-Dade. He tells New Times that he's unsure whether he's willing to take legal action against Garcia yet for blocking him, and plans to reach out to her office this week.

Neither Garcia nor her office responded to New Times' requests for comment via email and Instagram DM.

In February, Garcia made headlines when she abruptly quit Twitter after telling people to "move on" from racism and voting against an amendment to the recently passed 15-week abortion ban that would have made exceptions for rape and incest. She has since activated a Twitter feature that only allows people she follows or mentions in her tweets to reply to them and placed her account in "safety mode," which automatically blocks accounts that are engaging in "potentially abusive or spammy behavior."

"Grateful to those concerned about some of the constant harassment and abusive behavior I have been receiving on social media. It says nothing about me and everything about them. I am not afraid. I use my efforts to resolve not destroy," Garcia wrote in an April 15 tweet. "My faith is all I need."

But after placing her account in "safety mode," she apparently began auto-blocking a number of users who were tweeting questions regarding her former campaign manager. Some users also claimed that Garcia had manually blocked them — including one person who alleged he was blocked despite never having interacted with or heard of Garcia.

Rep. Mike Grieco, who is currently vying for Garcia's District 36 state senate seat, says he, too, was blocked by Garcia on April 15, several hours after he had taken to Twitter to criticize her decision to disable comments on her tweets.

"I guess I hit a nerve," Grieco tweeted.

Grieco sent out a campaign email blast that day titled "My opponent just blocked me on Twitter," noting that Garcia "apparently doesn't like democracy." He tells New Times he feels it's ironic that Garcia, whom he refers to as a "card-carrying" supporter of Donald Trump, wouldn't allow public dialogue on her Twitter feed, given that Trump allowed anyone to engage with his tweets.

"You know, as unlikable, and as awful a person Donald Trump is, at least he didn't disable his comments," Grieco says.

Grieco appears to be unblocked from Garcia's profile as of April 19. But he's not holding his virtual breath.

"Maybe she'll block me again," he shrugs. "I don't know."
KEEP MIAMI NEW TIMES FREE... Since we started Miami New Times, it has been defined as the free, independent voice of Miami, and we'd like to keep it that way. With local media under siege, it's more important than ever for us to rally support behind funding our local journalism. You can help by participating in our "I Support" program, allowing us to keep offering readers access to our incisive coverage of local news, food and culture with no paywalls.
Make a one-time donation today for as little as $1.