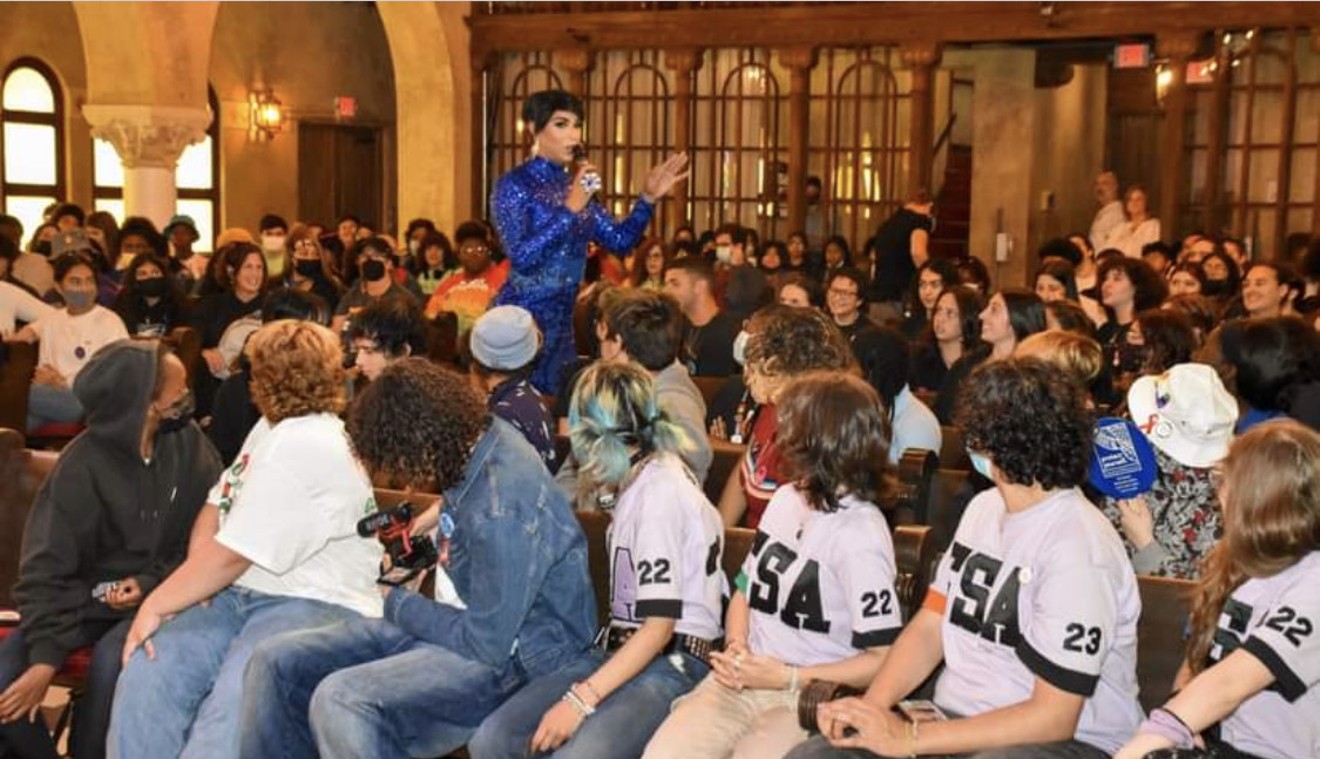 Crystal Famouz (center) emcees Empowerment Day on April 20, 2022. Photo courtesy of Safe Schools South Florida
Safe Schools South Florida, a nonprofit organization that promotes healthy interactions between LGBTQ students and their educators, works to make classrooms safer and more accepting. Almost every April for the past 11 years, the nonprofit has hosted Empowerment Day, which brings together different chapters of the student-run extracurricular club Gay-Straight Alliance and offers panels, pizza, and breakout sessions. The goal, as Safe Schools executive director Scott Galvin puts it, is to "interact and feel uplifted" by connecting students with important members of the local LGBTQ community.

Though the event had been canceled for the past two years owing to social-distancing concerns brought on by the COVID-19 pandemic, Galvin says everything was going according to plan this year. Until about five weeks before the event, that is. That's when two staffers notified him that Miami-Dade County Public Schools (MDCPS) had concerns about the event and wasn't sure whether it would promote it.

"These are the individuals that are our go-between for LGBTQ issues. When we want to do training for faculty members, we contact them to put it on their calendar and promote it to their teachers," Galvin explains. "These are our first-line folks, which made it all the more stunning to us."

Galvin says the concern focused on a promotional flyer that featured a photo of Crystal Famouz, a drag queen who'd be emceeing the event. He says the flyer, which was designed with a rainbow theme and included a small photo of Famouz in a glittery dress along with information about the event. He says the staffers raised concerns about students’ safety at home if they were to be pictured with a drag queen or rainbow flags.
click to enlarge 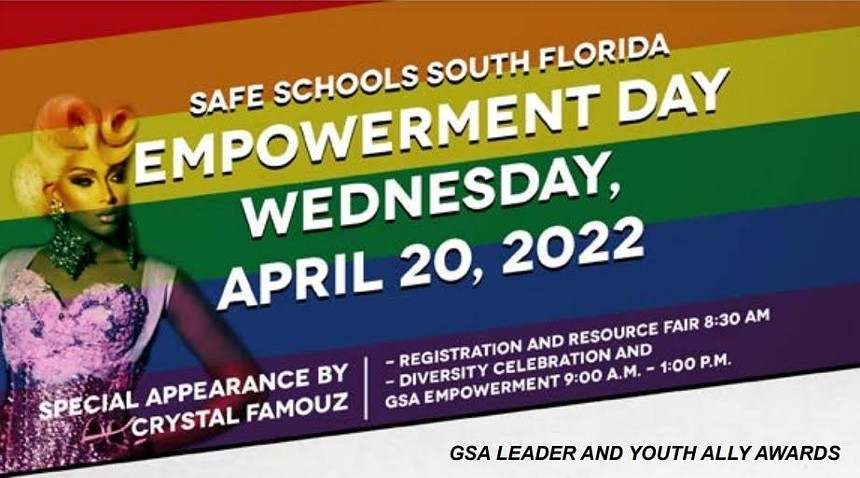 The original flyer
Photo courtesy of Safe Schools South Florida
"They said, 'Get rid of the drag queen or our schools are not going,' and that they can't justify this as being empowering," Galvin recounts. "Somewhere at this stage is when they said, 'Yeah, but "Don’t Say Gay" now exists.'"

Indeed, in March, Gov. Ron DeSantis signed into law HB 1557: Parental Rights in Education (known by opponents as the "Don't Say Gay" bill), which prohibits instruction on sexuality and gender between kindergarten and third grade or "in a manner that is not age-appropriate or developmentally appropriate for students in accordance with state standards." Whether Empowerment Day potentially violates HB 1557 is a moot point, Galvin says, given that the bill doesn't go into effect until July 1.

An MDCPS spokesperson tells New Times in an emailed statement that the decision not to promote Empowerment Day stemmed from the event's programming, which the school district claims was more focused on entertainment this year.

"Based on the information that was provided to us after the event planning process had taken place, the District felt as though the essence of the event had shifted with entertainment as a primary focus," reads the statement. "MDCPS personnel attempted to address some of these concerns; however, an agreement could not be reached."

The statement does not mention "Don't Say Gay."

MDCPS has collaborated with Safe Schools South Florida since 1994. During past Empowerment Days, Galvin says, MDCPS, specifically its Department of Student Services, would work closely with the nonprofit by advertising training seminars for teachers, and district employees would volunteer their time to help pull off the event, which hosts as many as 200 students over the course of the school day.

According to Galvin, Empowerment Day’s go-to venue for the past ten years, the Coral Gables United Church of Christ, had always been decorated with Pride flags for the event, which had never been an issue. Galvin believes the real concern was over the decision to have a drag queen emcee this year's event.
click to enlarge 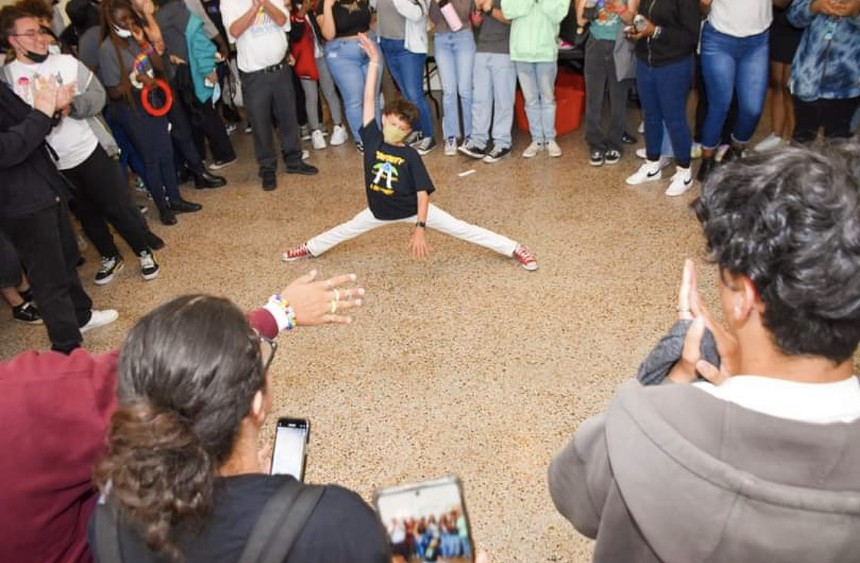 Breakout dance session during Empowerment Day
Photo courtesy of Safe Schools South Florida
Though HB 1557 doesn't go into effect until July, it appears that school districts across the state are already taking steps to minimize their risk. For example, in March, a Cape Coral school fired a pansexual educator for telling middle school students her orientation when they asked. In March, a Sarasota County school silenced an LGBTQ student’s graduation speech and prevented him from saying the word "gay." This comes as conservative groups like Moms for Liberty attempt to ban books that include LGBTQ characters in school districts across the state.

According to a survey by the Trevor Project, LGBTQ students who consider their school a safe space have lower rates of contemplating suicide. In its statement to New Times, MDCPS acknowledges its commitment to supporting LGBTQ students.

"MDCPS continues to promote a positive and proactive approach that supports all students, including the LGBTQ student population," reads the district's statement. "We continue to offer best practices to ensure that LGBTQ students have equitable access to all aspects of school life in ways that preserve and protect their dignity."

Ultimately, MDCPS determined it would not prevent students from attending Empowerment Day, but the district would not promote the event to any of their schools.

Galvin says this had little effect on turnout, given that the flyer had been circulating for a week before the district contacted Safe Schools South Florida with its concerns.

"I just don’t know, but there was someone reacting to 'Don’t Say Gay' with high school groups in a way that this law wasn’t intended to cover and has not even gone into effect yet," Galvin says.

Nonetheless, Galvin considers Empowerment Day a success. More than 200 students attended from across Miami-Dade. Awards were presented. Keynote speakers stood at the podium. Crystal Famouz emceed. Pizza was served. Film crews with Showtime's political docuseries The Circus shot portions of the event for an episode that aired in late April.

When the event came to a close, students marched outside chanting, "We say 'gay.'"

While Galvin was uplifted by the turnout and success of Empowerment Day 2022, he worries about how the next one will go, with HB 1557 in effect. The law, Galvin says, has already forced the nonprofit to change its programming and calls into question its ability to collaborate with public school districts about supporting LGBTQ students.

"I think our relationship with MDCPS will be just fine once they do the right thing and speak in full support of LGBTQ youth," he says.
KEEP MIAMI NEW TIMES FREE... Since we started Miami New Times, it has been defined as the free, independent voice of Miami, and we'd like to keep it that way. With local media under siege, it's more important than ever for us to rally support behind funding our local journalism. You can help by participating in our "I Support" program, allowing us to keep offering readers access to our incisive coverage of local news, food and culture with no paywalls.
Make a one-time donation today for as little as $1.