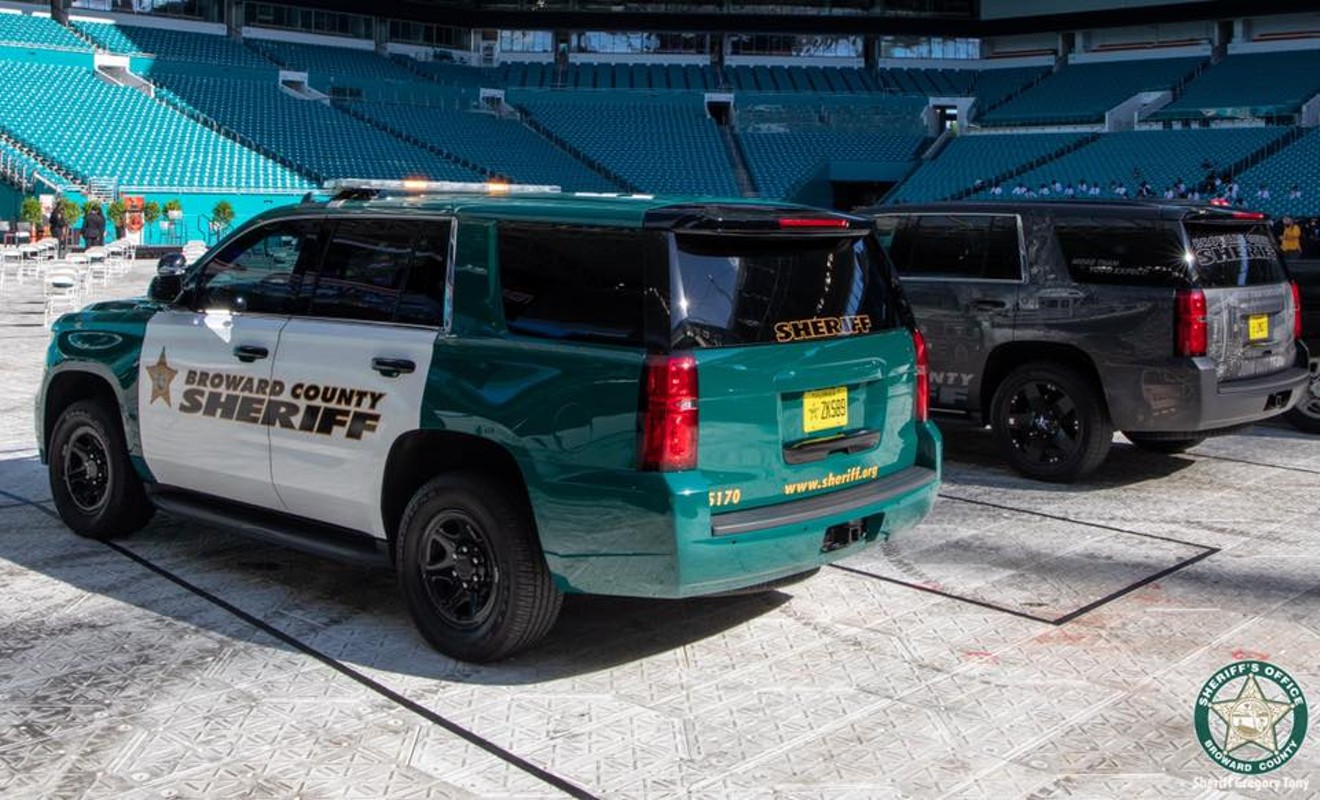 Luis Silberberg, a BSO deputy since 2006, was accused of falsifying overtime forms. Photo courtesy pf Broward Sheriff's Office
Old tweets from a Broward Sheriff's Office (BSO) detective, who was arrested yesterday for allegedly swindling the agency out of more than $15,000 for unworked shifts and false overtime, include a mention of "terrorizing Broward County" and a boast about collecting overtime pay.

Luis Silberberg, a BSO deputy since 2006 who worked in the robbery unit, was arrested on accusations of falsifying overtime forms on numerous occasions and lying more than 50 times about working a full shift when records showed he did not, according to a BSO press release.

The BSO says Silberberg claimed to have worked an entire day on 57 different occasions when records showed he was either at home or had only worked part of his shift. His arrest comes after a nearly 18-month investigation that began after the FBI asked for help investigating Silberberg on an unrelated case. Details of that case have not yet been made public.

According to the Sun-Sentinel, Silberberg earned $47,342 in overtime in 2019 on top of his $97,940 salary. The deputy has been suspended with pay since February, but following his arrest, he was suspended without compensation.

A Twitter account under Silberberg's name with a profile photo of the thin blue line emblem shows a series of posts from April through May of 2009, just a few years after the BSO hired him.

While many are stream-of-consciousness tweets along the lines of "just got out of the pool. about to eat some sushi..." and "eating some bangin ass breakfast," one finds Silberberg boasting about "Terrorizing broward county" while enjoying some doughnut-related job perks:


Chillin in the patty wagon. Terrorizing broward county and getting free coffe and doughnuts LOL

In another tweet, the detective talks about collecting overtime payments:


on that overtime money

Silberberg also tweeted about napping in a police vehicle used to transport inmates:

BSO spokesperson Gerdy St. Louis told New Times that while she doesn't know if the internal affairs division is aware of Silberberg's tweets, the posts will be forwarded to investigators. She declined to comment further, citing an open investigation into the deputy.

Sheriff Gregory Tony, who announced the arrest in a press conference, called Silberberg's actions a serious offense, noting that "the police have to be able to police themselves."

"I made a promise to the community that when we know, the community will know," Tony said. "It’s unfortunate that we have to stand here today and talk about the arrest of someone who took an oath to fulfill the public’s trust to safeguard this community."

Silberberg couldn't be reached for comment.
KEEP MIAMI NEW TIMES FREE... Since we started Miami New Times, it has been defined as the free, independent voice of Miami, and we'd like to keep it that way. With local media under siege, it's more important than ever for us to rally support behind funding our local journalism. You can help by participating in our "I Support" program, allowing us to keep offering readers access to our incisive coverage of local news, food and culture with no paywalls.
Make a one-time donation today for as little as $1.