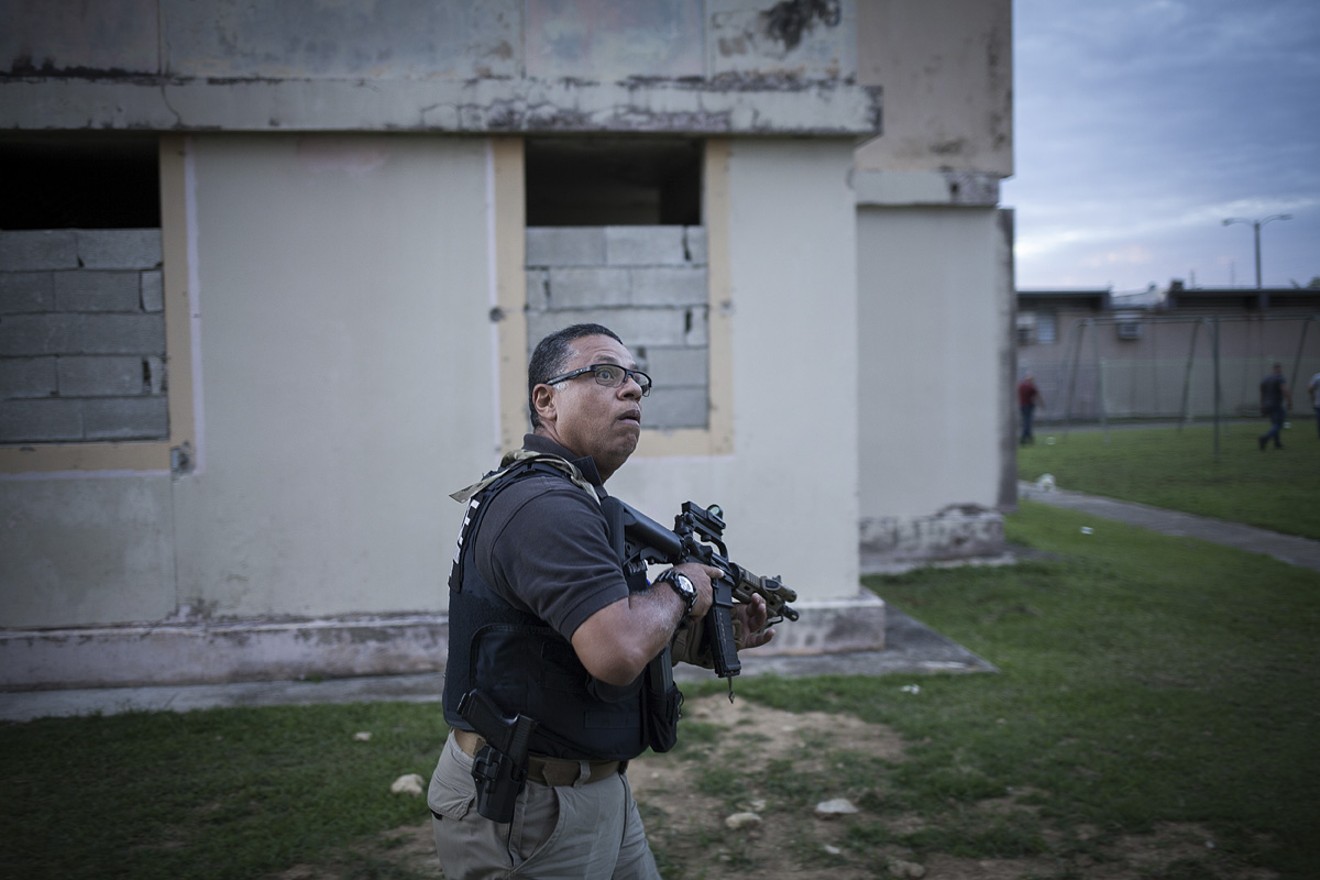 Officers search for drugs in an area infamous for dealing. Many of the agents are well armed against criminal organizations that don't want to give up their merchandise. Photo by Douglas Hook

As we tore into a maze of streets outside San Juan, Agent Victor O. Acevedo pulled a firearm from his belt and placed it on his lap as he looked for any threats that might surface. Acevedo, an enthusiastic eight-year veteran of Puerto Rico's narcotics department, had agreed to let me ride along with him one day to see a raid in action. At 12:30 p.m., we had been sitting at a quiet roadside stop near Brisas de Bayamón, a fenced-off area of low-income housing, when a call came in on the radio for the team to move in on a target. There were 12 vehicles — a mixture of SUVs, sedans, marked police cars, and two power-line repair vehicles — ready to tear into the estate.

Upon arrival, we saw the suspect sprinting away from the convoy. Acevedo and I exited the car and, with two other officers, ran after the subject, a boy in his late teens. He darted around a corner while throwing bags of marijuana over a nearby fence and a modified Taurus Millennium handgun into a dumpster. An agent grabbed him and pinned him to the ground. The other officers quickly cuffed him. Then the search for the pot and the gun began.

About 30 minutes passed before a call came in to head toward the Falin Torrech housing project, about 15 minutes away. Acevedo and I began walking back to the car. The other officers had already left. 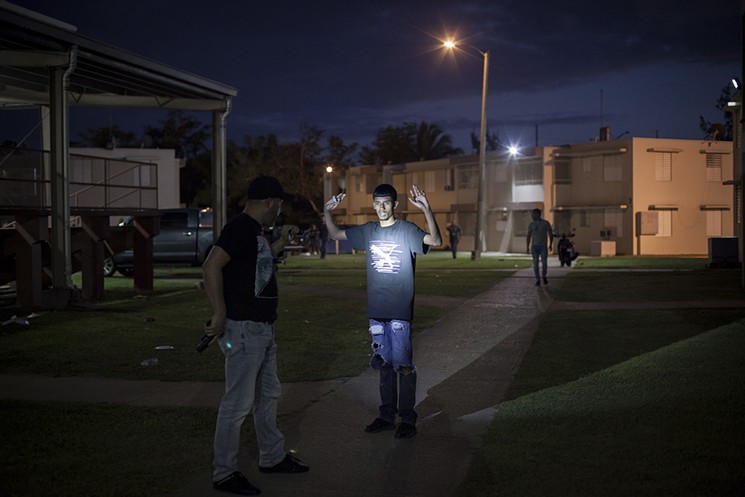 Police must stay on their toes when approaching suspects. In some areas of San Juan, anyone could have a weapon and choose to use it.
Photo by Douglas Hook
click to enlarge 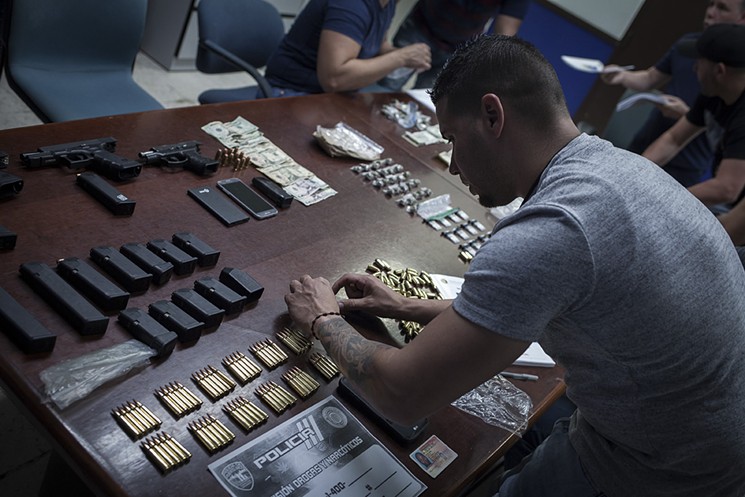 At the police station in Guaynabo, officers lay out the contraband found in one evening in a small suburb of San Juan. "This is a daily theme here in Puerto Rico," one officer says.
Photo by Douglas Hook

"Walk faster," Acevedo muttered as he repositioned his pistol from the back of his belt to the front. Slightly bewildered by his change of tone, I looked behind us and saw 11 men and a few children glaring in our direction and making their way toward us. Acevedo kept his hand on his firearm and quickly led me toward our car. The experience rattled us both, and without muttering a word, we understood we had stayed there too long.

Puerto Rico is in crisis these days — Gov. Ricardo Rosselló announced his resignation July 24 after the island's Center for Investigative Journalism published messages between the governor and his inner circle that included homophobic and misogynistic language and jokes about Hurricane Maria victims. Thousands of people have marched in the streets protesting corruption at the top, and the political fallout is expected to continue for weeks or even months.

Thousands of weapons are sent to Puerto Rico after their serial numbers are filed off.

So you'd be forgiven for not thinking about the gun violence there — but you'd be wrong to do so. Isla Verde, a popular tourist area of San Juan, saw a shootout between two rival drug organizations in broad daylight not long ago. And in the leadup to Three Kings' Day this past January 6, 22 people lost their lives violently. Under Rosselló's direction, Col. Rafael Rosa and the island's narcotics department have been charged with curbing the violence.

The majority of guns come from the United States, where it's easier and cheaper to obtain them legally. Thousands of weapons every year are disassembled and sent to Puerto Rico via U.S. mail after their serial numbers are filed off.

Yet U.S. Customs and Border Protection (CBP) takes no responsibility for the problem or initiative in finding a solution. In a statement, Jeffrey Quiñones, the agency's public affairs officer, told New Times: "The CBP does not have jurisdiction nor competency to inspect domestic mail entering Puerto Rico from the U.S. mainland. CBP only inspects international mail." 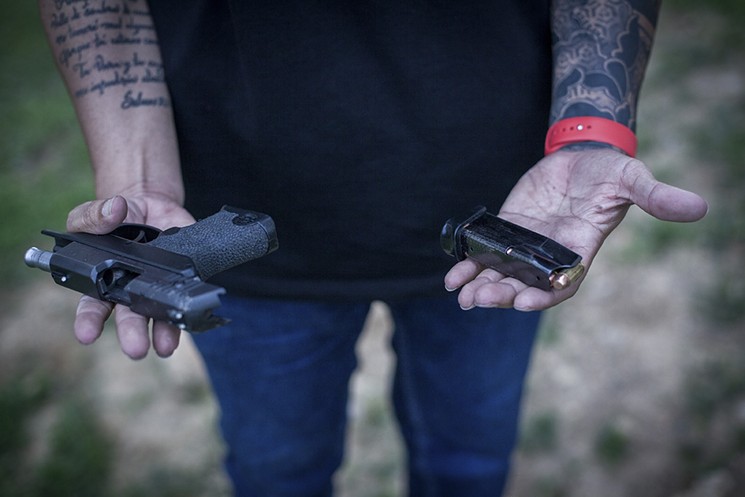 During a bust, officers found a 9mm Glock with a modified magazine to make the gun fully automatic.
Photo by Douglas Hook

As a result, there's a feeling of helplessness among members of the island's police force. Even though 2,086 illegal firearms were confiscated in 2018, San Juan police struggle to keep pace with the problem. Debt and a poor economy on the island have led large numbers of officers to relocate to the States, particularly Florida, where more than a million Puerto Rican immigrants — the most in the nation — reside. In the Sunshine State, there is better pay and less dangerous working conditions. That leaves a smaller, less experienced police force to combat the illegal-weapons trade back home.

Even though 2,086 illegal firearms were confiscated in 2018, San Juan police struggle to keep pace with the problem.

The main successes have come from Puerto Rico's drug division, which regularly raids housing projects that are known, through undercover police work and intelligence, to have received illegal packages. Caution when working in these areas is critical, officers say. They bear down on housing projects en masse to apprehend suspects as rapidly and as safely as possible, before they have time to react.

One area where the problem is especially severe is the housing projects of Bayamón, the island's second largest city, which is on the north coast. Places such as Virgilio Dávila, Las Gardenias, Brisas de Bayamón, and Falin Torrech are particularly precarious for officers of the area's drugs division, which includes the U.S. Marshals and the Bureau of Alcohol, Tobacco, Firearms, and Explosives, as well as local police, dog handlers, and even the two power-line repair vehicles. These areas are so dangerous that workers can't fix the lines without police protection. Otherwise, they risk being robbed or worse by the locals.

"They fire at police cars as they try to enter the projects," Colonel Rosa says. When entering the projects in San Juan, the police are well armed for self-defense.
Photo by Douglas Hook
click to enlarge 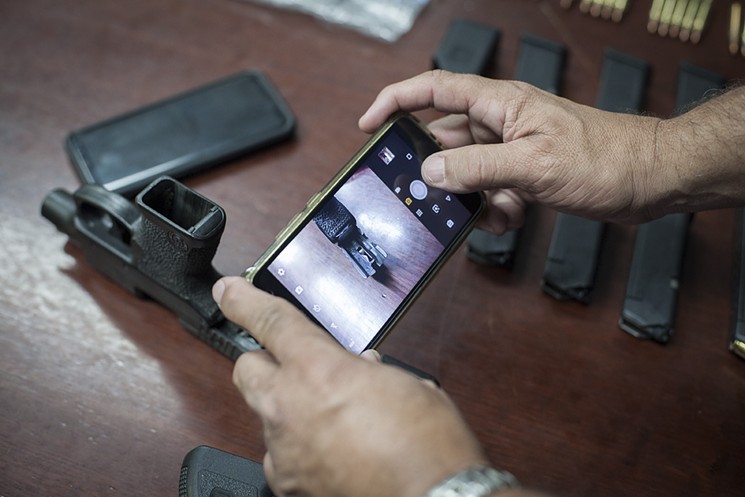 Handguns can be easily converted to fully automatic, a danger to citizens and to the officers trying to crack down on illegal weapons.
Photo by Douglas Hook

At 5:30 the evening of my ridealong, darkness began to creep in as the team pulled into a parking lot close to Plaza Las Americas, one of the Caribbean's largest malls, to regroup and get some food. Over the next few hours, they would seize three modified 9mm pistols, hundreds of rounds of ammunition, and bags of drugs ranging from marijuana to cocaine.

The team had received intelligence that a man dealing drugs out of his home had a substantial number of weapons and narcotics stashed on the premises. Now 6 p.m. and dark, the team of around 30 officers descended upon the property and converged on the ground-floor apartment of Miguel Angel Lopez Jr. They surrounded the building, and a narcotics officer aggressively pounded on the door while shouting, "¡Policía! ¡Abrir!" After a short pause, the door opened and a stream of law enforcement officers moved in. Lopez looked shocked at the speed of entry into the apartment. Two large officers grabbed him.

"There is nothing we can do to prevent the weapons from coming over... We don't have the resources."

Lopez stood over a table with his hands cuffed as officers on either side of him showed off the contraband they had seized. A small cache of weapons, along with hundreds of rounds of ammunition, was discovered in the oven. It seems Lopez had, upon hearing the commotion, tried to hide anything that would incriminate himself. Alas, he was not quick enough to foil the experienced officers' search: Cocaine was found packaged in tubes ready to be sold on the street.

It was only after we arrived back at the Bayamón police station at 1 a.m. that I realized the officers had considered the raid relatively mundane. 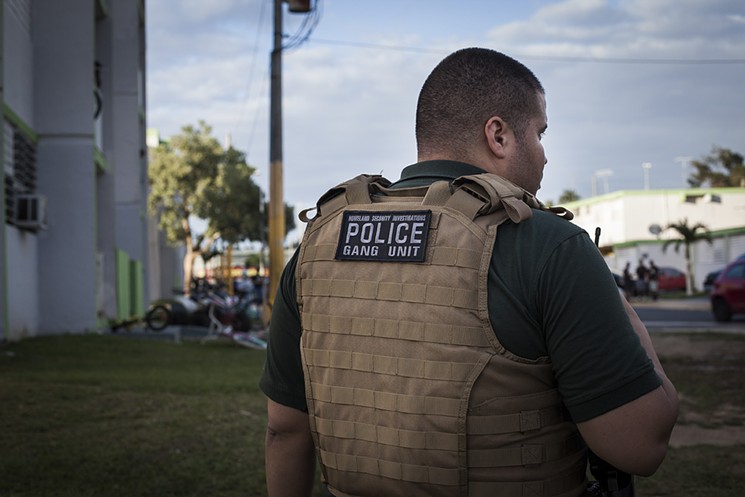 Puerto Rico's police officers work with a variety of U.S. agencies. A majority of the weapons used in illegal drug dealing on the island come from the mainland.
Photo by Douglas Hook

"This has been a quiet night for us," one narcotics officer mentioned in passing.

The majority of violent crime in Puerto Rico is gang-related. The island has a murder rate four times that of the mainland United States. With a murder rate of two in every 10,000 people, Puerto Rico is more similar to Central American countries than the U.S. in that regard.

The political tumult that sent scores of protesters into the streets will likely encourage even more violence and chaos, at least in the short term.

Colonel Rosa says the most effective way to improve conditions on the island is to prevent the export of guns and drugs at the source — on the mainland.

"There is nothing we can do to prevent the weapons from coming over," he says. "We need a lot of personnel to stop the flow into the country... We don't have the resources."

KEEP MIAMI NEW TIMES FREE... Since we started Miami New Times, it has been defined as the free, independent voice of Miami, and we'd like to keep it that way. With local media under siege, it's more important than ever for us to rally support behind funding our local journalism. You can help by participating in our "I Support" program, allowing us to keep offering readers access to our incisive coverage of local news, food and culture with no paywalls.
Make a one-time donation today for as little as $1.
Douglas Hook