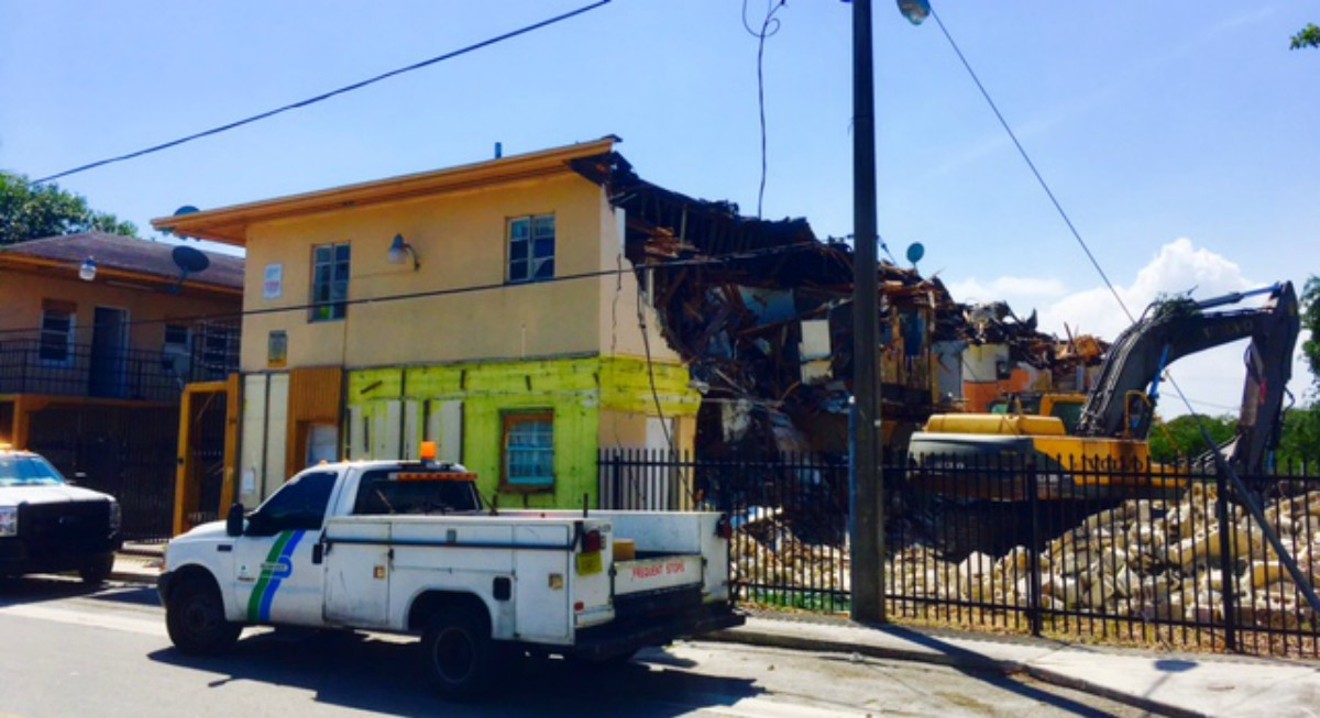 3410 Hibiscus St. was demolished earlier this month, displacing many longtime residents. photo courtesy of Harry Gottlieb
In 2016, the City of Miami sued the owners of several neglected apartment buildings in the West Grove. For years, tenants had lived in squalid conditions, forced to reckon with mold, raw sewage backups, caved-in ceilings, and other code violations that were never fixed. The city hoped to force the landlords to pay to relocate their renters to alternative housing that was affordable and safe.

But two years later, that plan hasn't panned out: Just this month, one of the apartment buildings, at 3410 Hibiscus St., was demolished, displacing about a dozen families. Soon, four other buildings will come crumbling down, leaving hundreds of people scrambling to sign new leases. And because finding affordable housing is a near-impossible feat in the rapidly gentrifying area, many fear that longtime residents will be displaced to the outer edges of the county, far from their jobs and children's schools.

"It's basically pushing them out and demolishing the community," says Tyrone Reath, who lived in two of the owners' buildings in recent years. "It's just sad."

While parts of the lawsuit are still pending in state court, city spokesman Eugene Ramirez confirms to New Times that in addition to the Hibiscus Street property, four others will be torn down in coming weeks. Demolition permits have been issued for 3401 Grand Ave., 3375 Grand Ave, 3400 Florida Ave., and 3412 Florida Ave.

"Pretty much what we were trying to avoid happening is what happened," says Guerby Noel, an attorney with Legal Services of Miami who represented the Hibiscus Street tenants in court.

The demolitions put residents in a tough spot. Though their apartments were by no means safe or clean, monthly rents ran about $500, making the units some of the few affordable options in the area. Noel says some of the Hibiscus Street tenants moved into public housing, while others who chose not to or didn't qualify moved into other properties owned by the same neglectful landlords. It was the only way they could afford to remain in the Grove.

"It's just a vicious cycle of moving from one unit of disrepair to another to another," Noel says.

Miami Commissioner Ken Russell, who has represented Coconut Grove since he was elected in 2015, calls the situation in the West Grove a "heartbreaking, existential crisis." He notes that after years of failing to maintain the buildings or fix code violations while still collecting rent, the owners are now legally within their right to sell the properties to the highest-bidding developers.

"The average rent is $500 and there are 120 units, so that's $60,000 they've been collecting monthly for years while not investing a penny back into the buildings," Russell says. "At the end of the day, this isn't government housing. If they want to redevelop it, they have a legal right to do so."

Russell says he is working to create more affordable housing through the Omni CRA.

"It can't come fast enough. It may even be too late, but we've gotta try," he says. "I can't stress enough about the CRA. Without it, we really say goodbye to the West Grove and put up a plaque memorializing the people that used to live there."