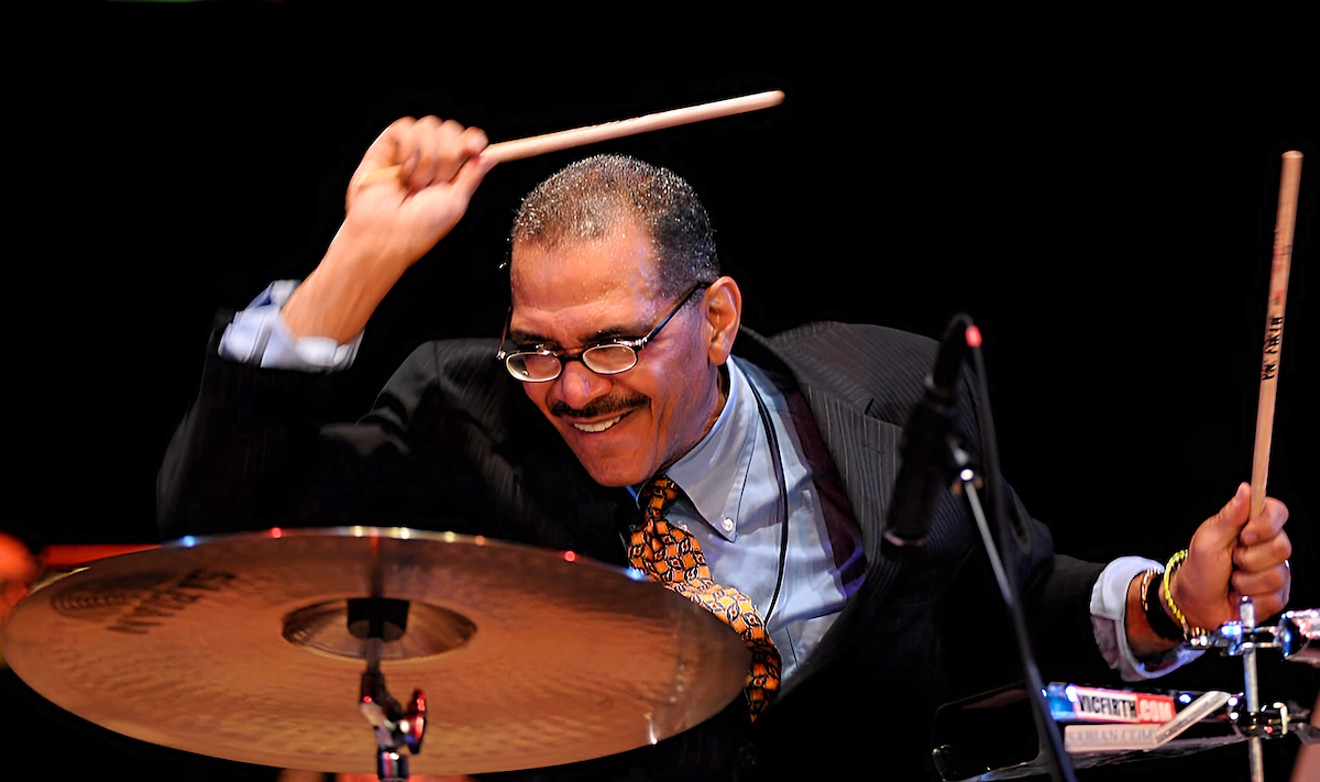 Mario Grillo is the son of Francisco "Machito" Jr. He's part of the Big 3 Palladium Orchestra performing at the South Beach Jazz Festival. Photo courtesy of the artist
The 2023 South Beach Jazz Festival promises a compelling sampler of styles and talent, from established veterans to future stars. The annual event takes place for four days, beginning January 5 through January 8, in several Miami Beach locations, and will showcase artists such as pianist Monty Alexander, percussionist Sammy Figueroa, and vocalist Wendy Pedersen.

But a particularly intriguing highlight is the Big 3 Palladium Orchestra conjuring the sound of the legendary Palladium Ballroom in New York City. Led by three musicians with famous fathers and artists in their own right, Mario Grillo, the son of the great sonero Francisco "Machito" Grillo, Tito Puente Jr., and Tito Rodriguez Jr., perform Mambo Night in Miami Beach at 8 p.m. Saturday, January 7, at the Miami Beach Bandshell (7275 Collins Ave., Miami Beach).

No place impacted the development and popularity of Latin music in the United States more than the Palladium Ballroom, the home of the mambo. Located at the northeast corner of Broadway and 53rd Street, it started as a dance studio in 1946, and the following year, it added a live show on Sundays. The response was such that, soon after, the Palladium was hosting live Latin music Wednesday, Friday, Saturday, and Sunday nights.

As the rumba craze took over the country in 1948 and through the 1950s, the undisputed kings of the Palladium — and mambo, cha-cha-cha, and the world of Latin music bubbling up to the surface in American culture — were Machito and his Afro-Cubans, the Tito Puente Orchestra and Tito Rodriguez.

They were the "Big 3" and not only set the high bar by which Latin bands have been judged since, but their innovations changed the sound and accents of American music.

"Everything we play is from the original book," says Grillo, percussionist and bandleader. "Keep in mind that Machito recorded nearly 100 albums, and that's a thousand arrangements. Tito Puente recorded 100 albums, and that's another thousand arrangements. Unfortunately, Tito Rodriguez, [who died of leukemia in 1973 at the age of 50], only got to record maybe 50 albums, but that's another 500 tunes. So, we have a choice of 2,500 pieces to play. We could start playing today, and we wouldn't finish until next year," says Grillo breaking into a laugh.

The 90-minute program might include classics such as "Mambo Inn," "Babarabatiri," "Mama Guela," "Chévere," "El Cayuco," "Complicación," and, of course, "Oye Como Va."

The original bands developed distinct sounds and had faithful followings, and while the competition between the bandleaders could get intense at times, their friendship prevailed. 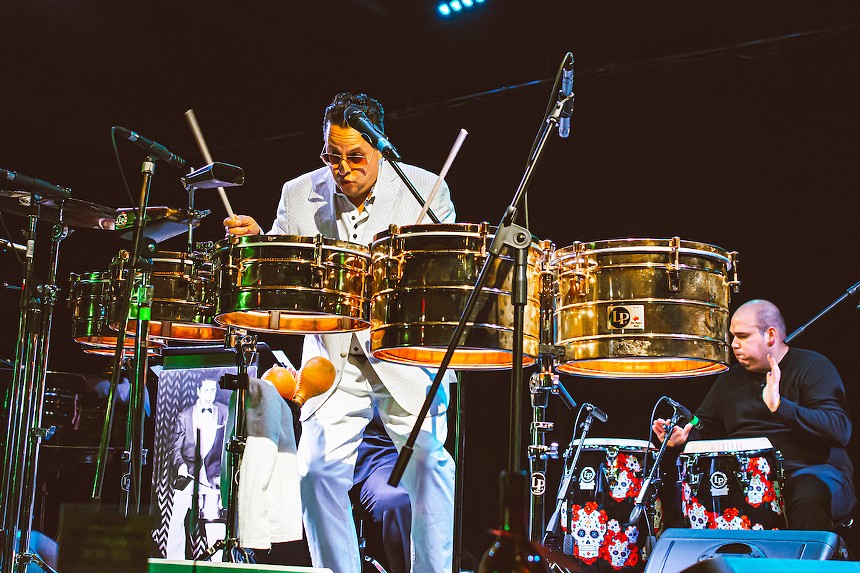 Tito Puente Jr. performs as part of the Big 3 Palladium Orchestra on Saturday, January 7.
Photo courtesy of MasterWing Creative Agency
"According to my father, it was a friendly rivalry," says bandleader and percussionist Tito Puente Jr. "But it really helped bring people to the Palladium. He loved Tito Rodriguez. And Tito Rodriguez was a very, very good timbal player. And Machito was, of course, Tito Puente's mentor and brought Dad to the front of the orchestra to play the timbales. He was highly regarded as one of the pioneers and leaders of the Afro-Cuban music movement."

Grillo recalls that Puente "came into Machito's band when he was still in high school. [Machito's musical director] Mario Bauzá recruited him. The association between the three of them [Puente, Rodriguez, and Machito] was longstanding. Yes, they were competitors, but they were friends too, which made it unique."

Bandleader and percussionist Rodriguez concurs. He notes that his father was closer to Machito and was using Machito's orchestra to accompany him before he passed away.

"You got to give credit to Machito and Mario Bauzá because they were the ones that put the American jazz horn lines to Afro-Cuban rhythm. They were the innovators, and I would say that Tito Puente and my father improved on it a bit and put a different sound to it. That's why the three big bands sound differently. It really worked out," says Rodriguez.

The three bandleaders, who grew up on the sounds of their fathers' bands and lived the excitement the bands created, emphasize the role of the orchestras as the foundation of so much of the Latin music heard since the beginning with the salsa explosion in the 1970s.

"What's amazing is that some of these arrangements are 50, 60 years old, and they don't sound dated," notes Rodriguez. "Now, that's a pretty amazing thing to pull off, isn't it?"

South Beach Jazz Festival: Mambo Night in Miami Beach. 8 p.m. Saturday, January 7, at Miami Beach Bandshell, 7275 Collins Ave., Miami Beach; 786-607-5299; sobejazzfestival.com. Tickets cost $41.20 to $82.40.
KEEP MIAMI NEW TIMES FREE... Since we started Miami New Times, it has been defined as the free, independent voice of Miami, and we'd like to keep it that way. With local media under siege, it's more important than ever for us to rally support behind funding our local journalism. You can help by participating in our "I Support" program, allowing us to keep offering readers access to our incisive coverage of local news, food and culture with no paywalls.
Make a one-time donation today for as little as $1.
ArtburstMiami.com is a nonprofit source of theater, dance, visual arts, music, and performing arts news.