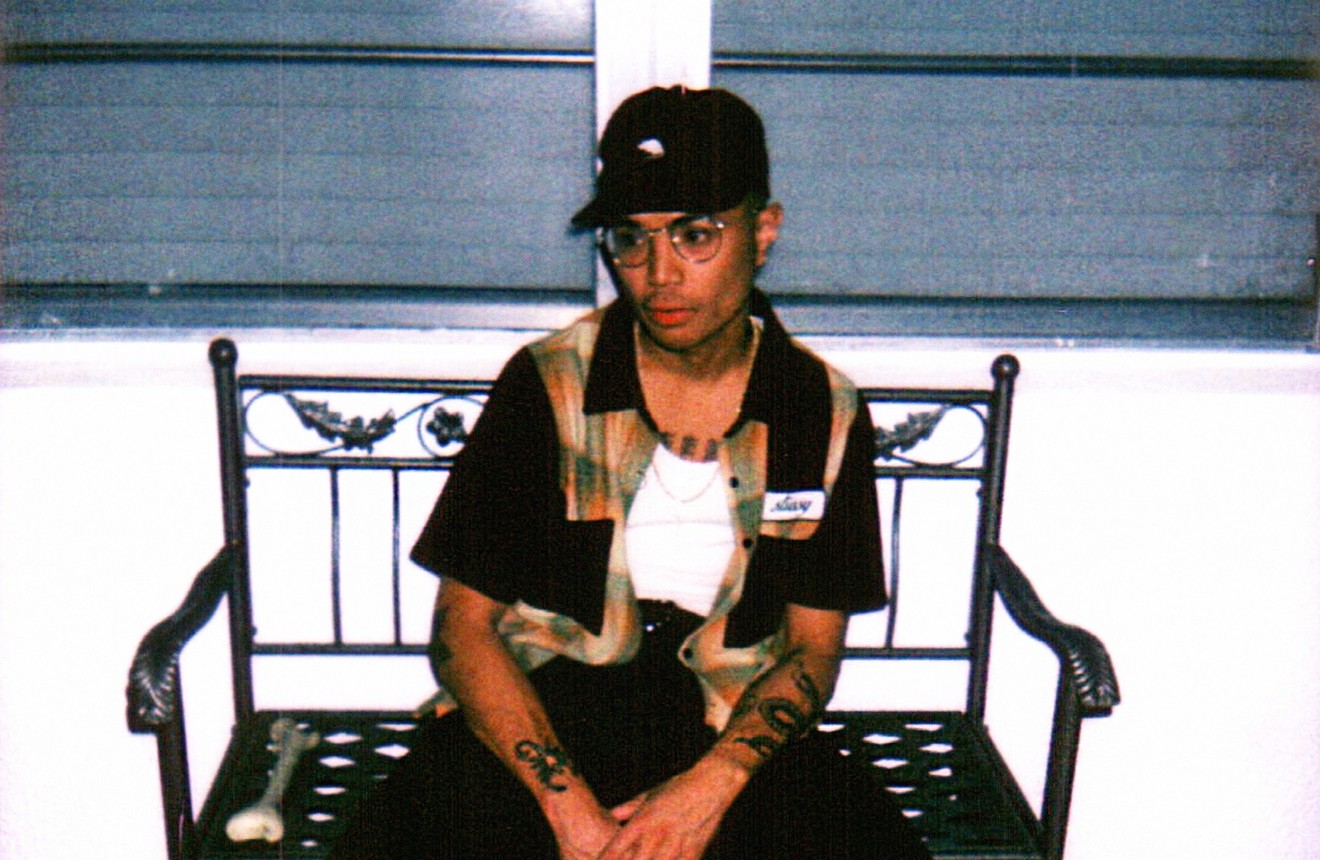 Yeek Photo by Chris Cadaver
South Florida hip-hop has developed a reputation as a style dominated by face-tattooed teenage mumble-rappers breaking into the mainstream through SoundCloud.

Though he got his start on the streaming platform, Naples native Yeek credits an earlier SoundCloud era, characterized by producers experimenting with various sounds, for his DIY spirit. His music reflects those roots, interpolating hip-hop, punk, and rock into his alternative tracks.

Genre-bending is certainly a characteristic of new music coming out of the South Florida scene, and Yeek says his take allows him to reach a broader audience.

His career has taken him a long way from his childhood in Naples, though he credits his upbringing in Florida, where he moved from New Jersey at the age of 12, with the start of his experimentation in music.

There was a much slower pace in Naples than he was accustomed to, he explains to New Times from Lollapalooza, where he's readying himself for a closing-day set.

“It gave me a lot of time to be bored and have an imagination,” he says. “It sparked a lot of deep thoughts and creative thoughts and ideas.”

Like a lot of teenagers growing up in the tech era, Yeek began experimenting with different kinds of media. He recorded skits on his camcorder, filmed his friends skateboarding, and spent a lot of time in his garage “jamming out.”

He began his foray into jamming with a number of bands, where he specialized in “guitar, drums, and screaming into a mike.”

His older brother introduced him to a lot of the music that inspired him at a young age — punk bands such as the Cure, Black Flag, and Bad Brains, as well as artists such as Alanis Morissette. He also was inspired by a number of hip-hop acts, ranging from Mos Def and Mobb Deep to Three 6 Mafia.

All of those musical elements contributed to his development as an artist, as did his experience growing up as one of the only Filipino kids in his northeast Naples neighborhood.

"They weren’t hip to Southeast Asians, especially in that time — early to mid-2000s. I was putting everyone in that area on to what a Filipino was because a lot of people didn’t know,” he says. “They assume you’re Chinese or Japanese.”
Eventually, he found common ground with people who didn’t understand the Filipino experience. “They realized how similar Filipino is to, like, Cubans or Dominicans or Puerto Ricans,” he says.

Yeek says those experiences allowed him to communicate with people in Florida who might not have expected to relate to him. “It was cool growing up to be able to connect with people that didn’t even expect that they were going to connect with me because of my background or my culture and what I come from,” he says.

As an adult finding success in the music industry, he’s inspired by newer artists such as Playboi Carti and Young Thug, as well as his Bad Habit labelmate Burna Boy, who was recently featured on Beyoncé’s new album, The Lion King: The Gift.

Yeek has also been benefited massively from the evolution of streaming that followed his roots on SoundCloud. With nearly 800,000 monthly listeners on Spotify, his biggest songs have garnered tens of millions of streams.

But along with the streaming era has come a renewed pressure on artists to create because of the sheer volume of music and the frequency with which it is released. “It’s focused around the product, because of everyone’s attention span,” he says. “Everyone gets bored of stuff so quickly, so there’s added pressure.”

However, Yeek isn’t one to let that get to him or affect the music he creates. Quality over quantity is his motto, and he tends to free-associate during his process.

“I’m really just creating music right now with no motive, no plan,” he says. “For me, it’s just about making quality stuff that’s worth checking out.”

He prefers to create from his home in the Valley in Southern California, where he can create and handle the business side of things while also being able to relax and smoke legal weed.

He’s not too worried about the future, he says, because he knows his music will come from a “real place.” And in terms of his fans, new or old, he hopes his music touches anyone who needs or wants it.

“Whoever wants to fuck with it can fuck with it,” he says. “And, hopefully, it reaches the right people, whoever that may be. I’m just happy to share it.”

Yeek. 9 p.m. Thursday, August 15, at the Ground, 34 NE 11 St., Miami; thegroundmiami.com. Tickets cost $15 via evenbrite.com.
KEEP MIAMI NEW TIMES FREE... Since we started Miami New Times, it has been defined as the free, independent voice of Miami, and we'd like to keep it that way. With local media under siege, it's more important than ever for us to rally support behind funding our local journalism. You can help by participating in our "I Support" program, allowing us to keep offering readers access to our incisive coverage of local news, food and culture with no paywalls.
Make a one-time donation today for as little as $1.