Travis Scott and Snoop Dogg Make an Interesting Pair, If You Think About It 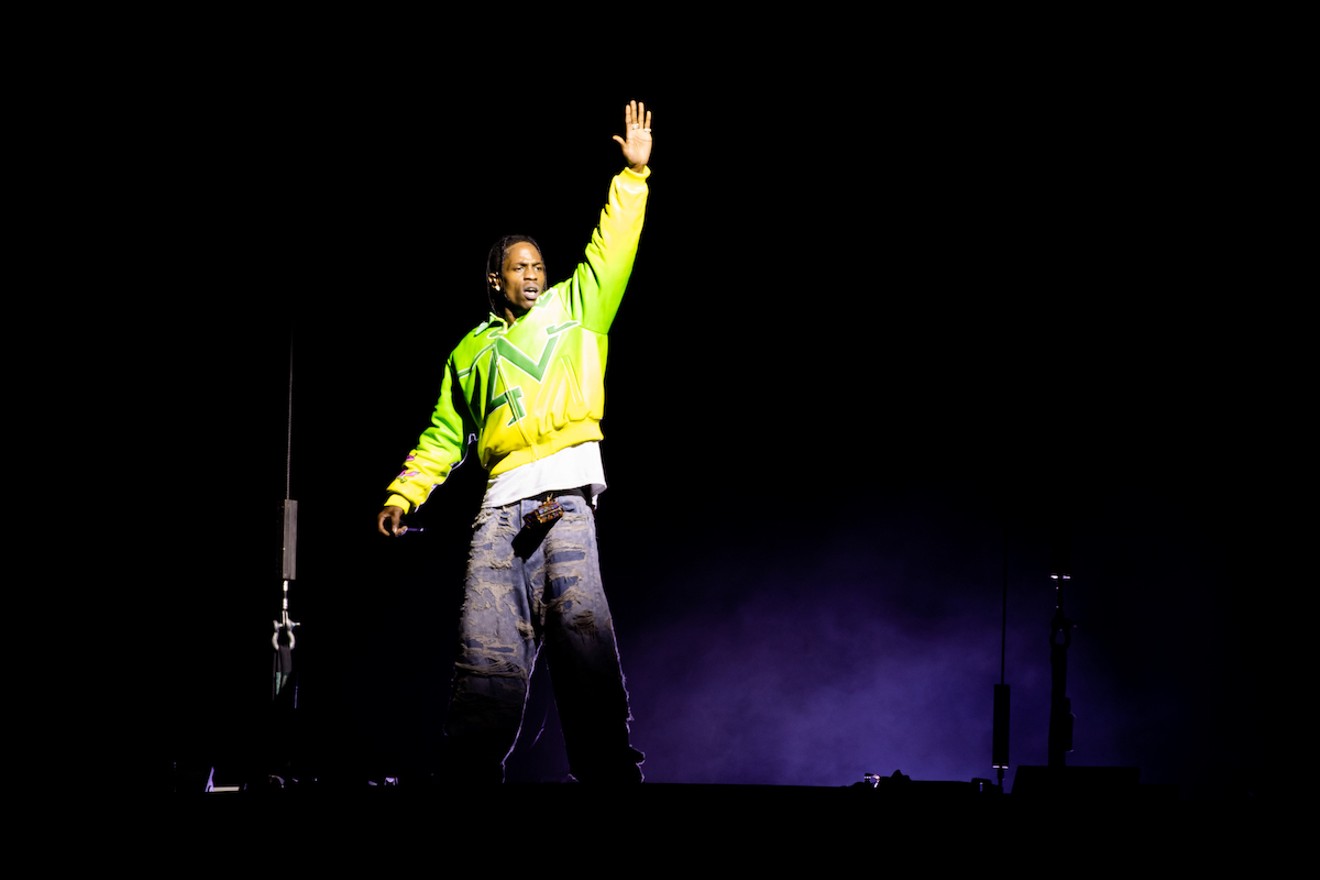 Travis Scott performing at Rolling Loud in Miami on July 24, 2021 Photo by Rich Fury/Getty Images
It's the holiday season again, and Miami nightclubs are pulling through with star-studded events in time for everyone to dress up as their favorite characters.

The Fontainebleau Miami Beach will host live sets from two generation-defining rap stars on back-to-back nights ahead of Halloween. Friday, October 28 is slated for West Coast legend Snoop Dogg, with Saturday, October 29 set for one of the most recognizable faces of the past decade: Travis Scott. Per usual, both performances will be supplemented by surprise guests and DJ sets starting at 9 p.m.

There's not much in common between the two headliners. Most times, it seems like Scott performs like he's purging through an out-of-body experience, while Snoop carries himself more like he's out for a leisurely walk. Much of that has to do with the intent behind the music, among other things: emotions, ambitions, influences, and audience. The ability for them to coexist in the same medium today is just a testament to the range and ambiguity of hip-hop. It's a beautiful thing.

Since the start of his career, Snoop's perennial output has been subject to decades worth of critical praise, commercial success, and worldwide outreach. So many classic (and lowkey funny) moments peppered across his discography give context to his sustained longevity: the droning groove of his introductory single "What's My Name"; the goofy Bill Clinton reference on "Still a G Thang"; and the onomatopoeic tongue clicking of "Drop It Like It's Hot." Also, his auto-tuned melodies on the 2007 hit "Sensual Seduction" have always been some of his hardest material.

The man deserves his flowers for simply being himself.

Snoop Dogg backstage at the 2022 MTV VMAs
Photo by Catherine Powell/Getty Images for MTV/Paramount Global
Contrary to Snoop's experimental detour, Travis Scott's entire digital footprint has been soaked and mantled in auto-tune. As an underling for both Ye (née Kanye West) and T.I. in the early 2010s, Scott spent nearly three years crafting and recrafting his debut solo mixtape, Owl Pharaoh. Released in 2013 with help from several industry aces, Owl Pharaoh is a brazen outline of the maximalist neopsychedelia Scott would grow into later (see "Bad Mood / Shit On You").

The subsequent arc of Scott's career saw his rise to fame pick up steam through his fan-favorite Days Before Rodeo mixtape and his watershed debut studio album, Rodeo, released in 2015. Scott continuously leapfrogged one project to the next, meshing punchy, synthetic vocals with cinematic swells and warps in the production. Days Before's "Drugs You Should Try It" and Rodeo's "90210" still stand out as some of his most emotive, boundary-pushing tracks to date.

Everything for Scott since then is history. All the songs you've heard by now, like "Antidote" and "Goosebumps" and "Pick Up the Phone," have catapulted him to A-list status, with his most successful album, Astroworld, coming afterward in 2018. As a trailblazer in contemporary rap, Scott's imprint has deepened through collaborative work with the Migos, Future, Drake, Young Thug, and his idol, Kid Cudi. His record label, Cactus Jack, has established a wider platform for upstarts like SoFaygo and Don Toliver, the latter being one of the most revered surprise guests on Astroworld for his resonant verse on "Can't Say."

This year, Snoop Dogg has dropped a total of four projects, including a Gangsta Grillz tape with DJ Drama this past week entitled Gangsta Grillz: I Still Got It. Travis' coveted Utopia album is still on hold after over two years of building hype, but this year he's had a hand in Future & Southside's "Hold that Heat" single as well as Nav & Lil Baby's "Never Sleep."

Miami can sit back and smile this week, knowing that two superstars in their own right are set to take the city over on back-to-back nights.

Travis Scott. 9 p.m. Saturday, October 29, at Fontainebleau Miami Beach, 4441 Collins Ave., Miami; bleaulive.com. Tickets cost $175 to $1,000 via eventbrite.com.
KEEP MIAMI NEW TIMES FREE... Since we started Miami New Times, it has been defined as the free, independent voice of Miami, and we'd like to keep it that way. With local media under siege, it's more important than ever for us to rally support behind funding our local journalism. You can help by participating in our "I Support" program, allowing us to keep offering readers access to our incisive coverage of local news, food and culture with no paywalls.
Make a one-time donation today for as little as $1.
Olivier Lafontant is an intern for Miami New Times. He's pursuing a bachelor's in digital journalism at Florida International University. He specializes in music writing and photography and got his start as a writer for South Florida Media Network in 2021.
Contact: Olivier Lafontant
Follow:
Twitter: @oliviersaidhi
Instagram: @oliviersaidhi