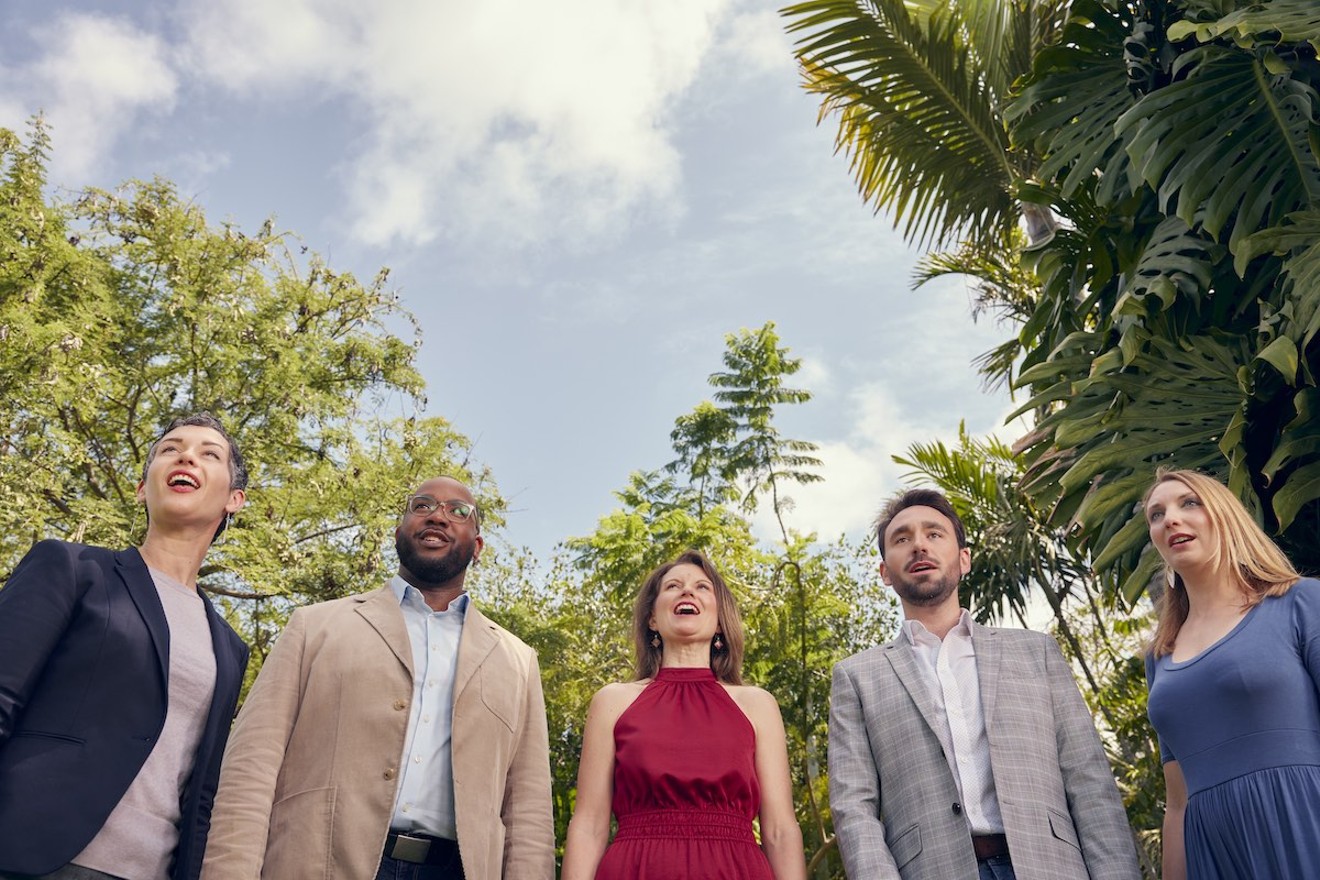 The choir performs four shows beginning Thursday, January 19, in Naples, then heads back to South Florida, where three churches in Coral Gables, Miami Beach, and Fort Lauderdale will be the settings for the music. On Friday, January 20, the group performs at 8 p.m. at Church of the Little Flower in Coral Gables; then on Saturday, January 21, at 7:30 p.m., it's All Saints Episcopal Church in Fort Lauderdale. The final concert is a matinee on Sunday, January 22, at 4 p.m. at All Souls Episcopal Church in Miami Beach.

Founded in 2002 by current artistic director Patrick Dupre Quigley, the ensemble boasts a roster of top performers, teachers, and scholars, as well as 16 albums to date and collaborations with, among others, the Cleveland Orchestra, New World Symphony, and pop star Shakira. The choir has an international reputation for dynamic, cutting-edge, and historically informed programming that encompasses secular and sacred literature.

It was a meeting at a choral conference that Ferdinand, now director of choral activities at the University of Maryland and previously at Oakwood University in Hunstville, Alabama, and Quigley were attending that led to the invitation for Ferdinand to guest conduct Seraphic Fire.

"I've known Patrick over the last few years, and we met in person in 2019 American Choral Directors Association. Many of us attend the same conferences, and many of us have mutual friends," Ferdinand says.

The program is conceived around American composer and conductor Aaron Copland's "Old American Songs" — two song sets Copland published in 1950 and 1952 for voice and piano. The collections include well-known favorites like the spirituals "At the River" and "Simple Gifts."

"We start in America, and we end in America," Ferdinand explains about the program. "I thought it would be pretty cool to begin with Copland doing this Americana music and to do music that was born and birthed here." 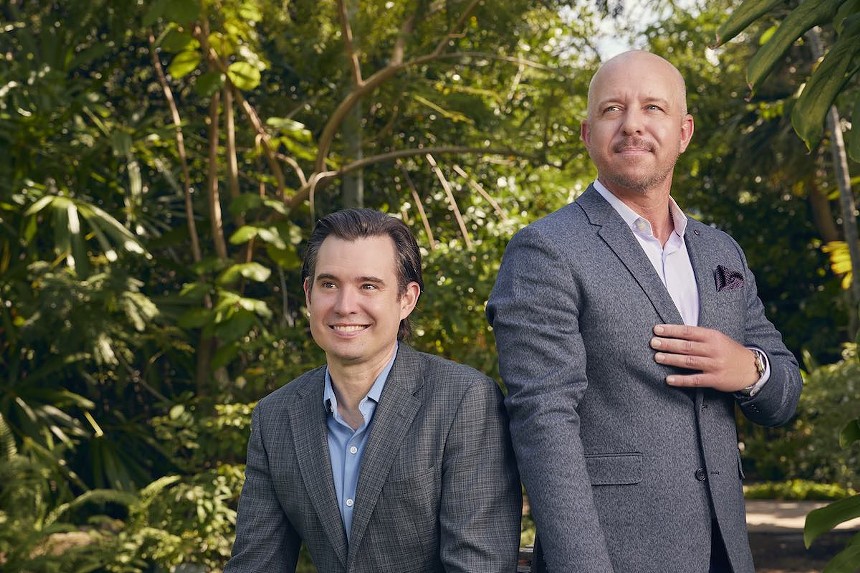 Seraphic Fire artistic director Patrick Quigley (left) and associate conductor James Bass
Photo by Mary Beth Koeth
An original program, which was to feature all Copland choral music, needed to be canceled by Seraphic Fire during the pandemic.

However, for the January program, Ferdinand went further and added rarely heard pieces like Mulholland's "Keramos" and works by African-American composers like Hall Johnson's "I Cannot Stay Here By Myself," Moses Hogan's "My Soul's Been Anchored in the Lord," and Chicago-born King's enchanting and airy "Psalm 57."

Ferdinand included works that reflect America's history of slavery and racism since keeping this history alive allows it to inspire new composers, he says.

"The fact that it was born right here means this has the footprint and all the reverberations that made this music," explains Ferdinand. "The moment in time was not a pretty one, but sometimes the most noble gifts come from what are not the most ideal circumstances."

"Young composers of all ethnicities should have the inspiration to keep creating," says Ferdinand.

Thompson's 2015 choral work, "Seven Last Words of the Unarmed," won the 2018 American Prize for Choral Composition with a libretto built around the seven last words spoken by unarmed Black men. 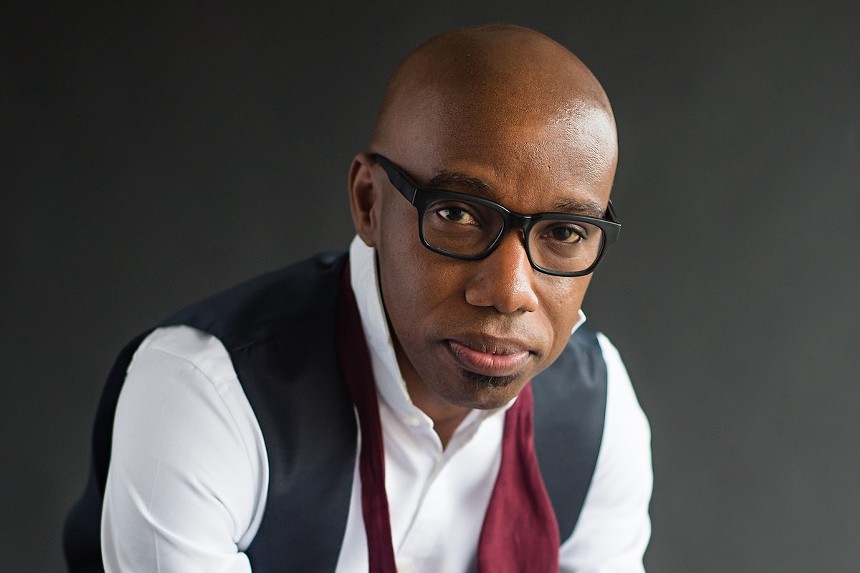 Jason Max Ferdinand
Photo by Gianna Snell
"[Thompson] gives a lot of thought to what he's composing and the texts he's using," says Ferdinand. "None of it is writing for writing's sake — he is really trying to reflect what's happening in society."

Though the January performance presents, many rarely heard spirituals, as an African-American conductor and composer Ferdinand is careful when programming spiritual music.

"I don't program spirituals sometimes so as not to be pigeonholed," he says. "I try to participate in all the genres of choral music I can. I spend a lot of time doing Brahms and Beethoven."

In 2019, Ferdinand conducted the Oakwood Aeolians in a program for the American Choral Directors Association conference, where he says he intentionally fashioned a program without a concert spiritual.

"We programmed Bach, [Pietro] Ferrario, and more classical things," Ferdinand explains. "We might be Black, but we can do all the other types of music. It is important for the younger people to see us doing all kinds of music."

The 2019 performance proved the catalyst behind the current program. Quigley and Seraphic Fire just happened to be headlining that same ACDA conference.

"[Jason] was there leading the Oakwood University Aeolians as part of the conference in a program that included J.S. Bach's 'Singet dem Herrn.' They blew everyone at the conference away with their performance," says Quigley. "One of our members, Reginald Mobley, is an Oakwood alum and introduced me. From then on, we looked for a way to get Jason to Miami to collaborate with Seraphic Fire, and the rest is history."

Seraphic Fire Presents "Old|New." With guest conductor Jason Max Ferdinand. 8 p.m., Friday, January 20, at Church of the Little Flower, 2711 Indian Mound Trl., Coral Gables; 7:30 p.m., Saturday, January 21, at All Saints Episcopal Church, 333 Tarpon Dr., Fort Lauderdale; and 4 p.m., Sunday, January 22, at All Souls Episcopal Church, 4025 Pine Tree Dr., Miami Beach; 305-285-9060; seraphicfire.org. Tickets cost $50.
KEEP MIAMI NEW TIMES FREE... Since we started Miami New Times, it has been defined as the free, independent voice of Miami, and we'd like to keep it that way. With local media under siege, it's more important than ever for us to rally support behind funding our local journalism. You can help by participating in our "I Support" program, allowing us to keep offering readers access to our incisive coverage of local news, food and culture with no paywalls.
Make a one-time donation today for as little as $1.
ArtburstMiami.com is a nonprofit source of theater, dance, visual arts, music, and performing arts news.