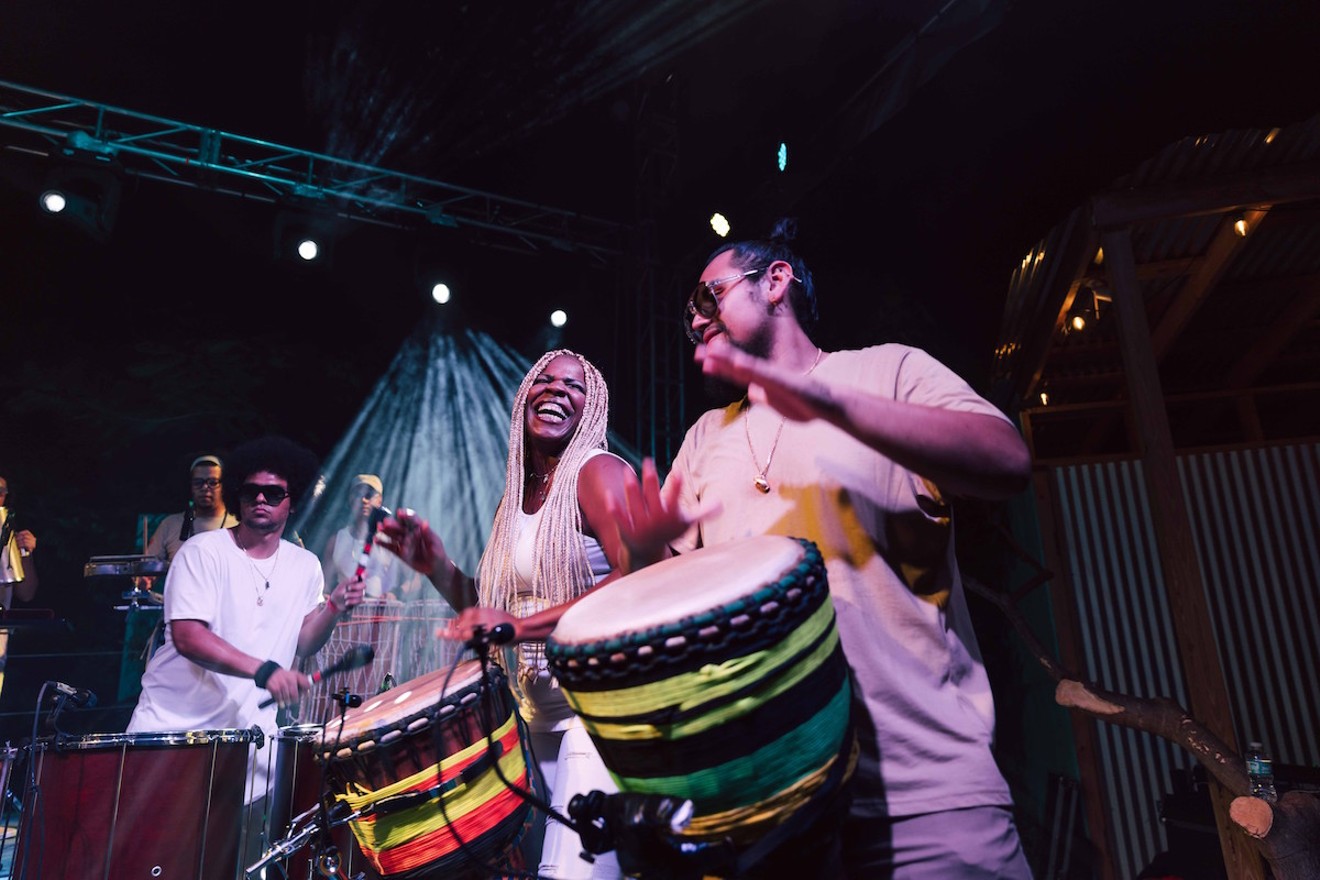 Rhythm Portal takes place every Wednesday through the end of May at the Center for Subtropical Affairs. Photo by Ivan Lanz
The sun sets, and the air begins to cool. Andy Ovsejevich stands at the entrance of the Center for Subtropical Affairs in Little River and assists with unloading musical equipment from the back of a black truck. It's hours before the second installment of the weekly party Rhythm Portal.

Musicians stand on a large stage while tech hands climb the side of the metal railings like monkey bars. The lights start to go up as the band practices keeping their tempo.

Debuting earlier this month, Rhythm Portal takes place every Wednesday at the Little River venue. Each week, guests are invited to step through the red neon archways and experience live music in a labyrinth of greenery. The event's 11-person band plays an improvised set and each week a special musical guest is invited to perform alongside it. It’s like a great big jam session and the community is invited.

Organized by event producer Martin Hojman and Ovsejevich, executive director of the Argentina-based Ciudad Cultural Konex, the weekly event is slated to run through the end of May.

"The idea [behind Rhythm Portal] was to create similar programming to what we do at the Konex in Argentina here in the States," Ovsejevich says. "This is our first production, but we expect to have more in the future and to grow locally."

Ovsejevich founded Ciudad Cultural Konex in Buenos Aires in 2004. The performing-arts center is dedicated to producing performances that are tailored to a young crowd with the purpose of bringing high art to the masses. It specializes in experimental art forms as well as traditional art, like theater, music, and dance.

While Ovsejevich resides mainly in Argentina, the Buenos Aires native splits his time between South America and Miami. His goal is to expand Ciudad Cultural Konex's program offerings in Miami and eventually open up a venue.

He points to an event Ciudad Cultural Konex produces in Argentina with a local band, La Bomba de Tiempo, as the inspiration for Rhythm Portal. At events organized alongside La Bomba in Argentina, the band easily attracts crowds that are 1,500 strong.

Rhythm Portal's band doesn't work off any predetermined sheet music during each performance.
Photo by Ivan Lanz
Ovsejevich wants to tap into that same energy with Rhythm Portal — except with more local flavor. He enlisted one of the band members of La Bomba to help book for Rhythm Portal's house band.

"All of the musicians in the band are local, and that was very important for us to have members of the community be a part of the Rhythm Portal band," he explains.

Although the band was brought together for the purposes of Rhythm Portal — and didn't know each other a month ago — the musicians are harmoniously in tune. The band doesn't work off any predetermined sheet music during each performance but rather feels the beat and lets the music guide it. The result is a kind of rhythm that'll feed your soul and rejuvenate your senses.

"It's a unique experience every week," says Ovsejevich with a broad smile. "The band completely improvises their set each time, so it's never the same show twice."

A conductor on stage uses hand signals to cue the musicians and keep the flow moving. Adding to the uniqueness of each set is a special musical guest invited to perform with the band each week.

As the band rehearses, the sounds of unscripted drum beats and piano keys carry on the breeze. The tree branches overhead sway and let fall tiny mango flowers.

When the set is done, there's a stillness before the crowd arrives. No more playing of percussion instruments. No more humming and vocal practice from the evening's musical guest. Instead, if you listen closely, you can hear the sounds of shoes crunching gravel as organizers and staff scurry to ready the space.

Ovsejevich comfortably switches between Spanish and English as he speaks. When describing Rhythm Portal, he sticks to the Romance tongue and passionately exclaims, "¡Es una fiesta!" He smiles and gazes around.

"People come here for this weekly party to have a good time, dance, eat and drink, and enjoy an excellent caliber of live music," he adds.

Rhythm Portal. 7:30 p.m. Wednesdays, at the Center for Subtropical Affairs, 7145 NW First Ct., Miami; cstamiami.org. Tickets cost $30 to $45 via eventbrite.com.
KEEP MIAMI NEW TIMES FREE... Since we started Miami New Times, it has been defined as the free, independent voice of Miami, and we'd like to keep it that way. With local media under siege, it's more important than ever for us to rally support behind funding our local journalism. You can help by participating in our "I Support" program, allowing us to keep offering readers access to our incisive coverage of local news, food and culture with no paywalls.
Make a one-time donation today for as little as $1.