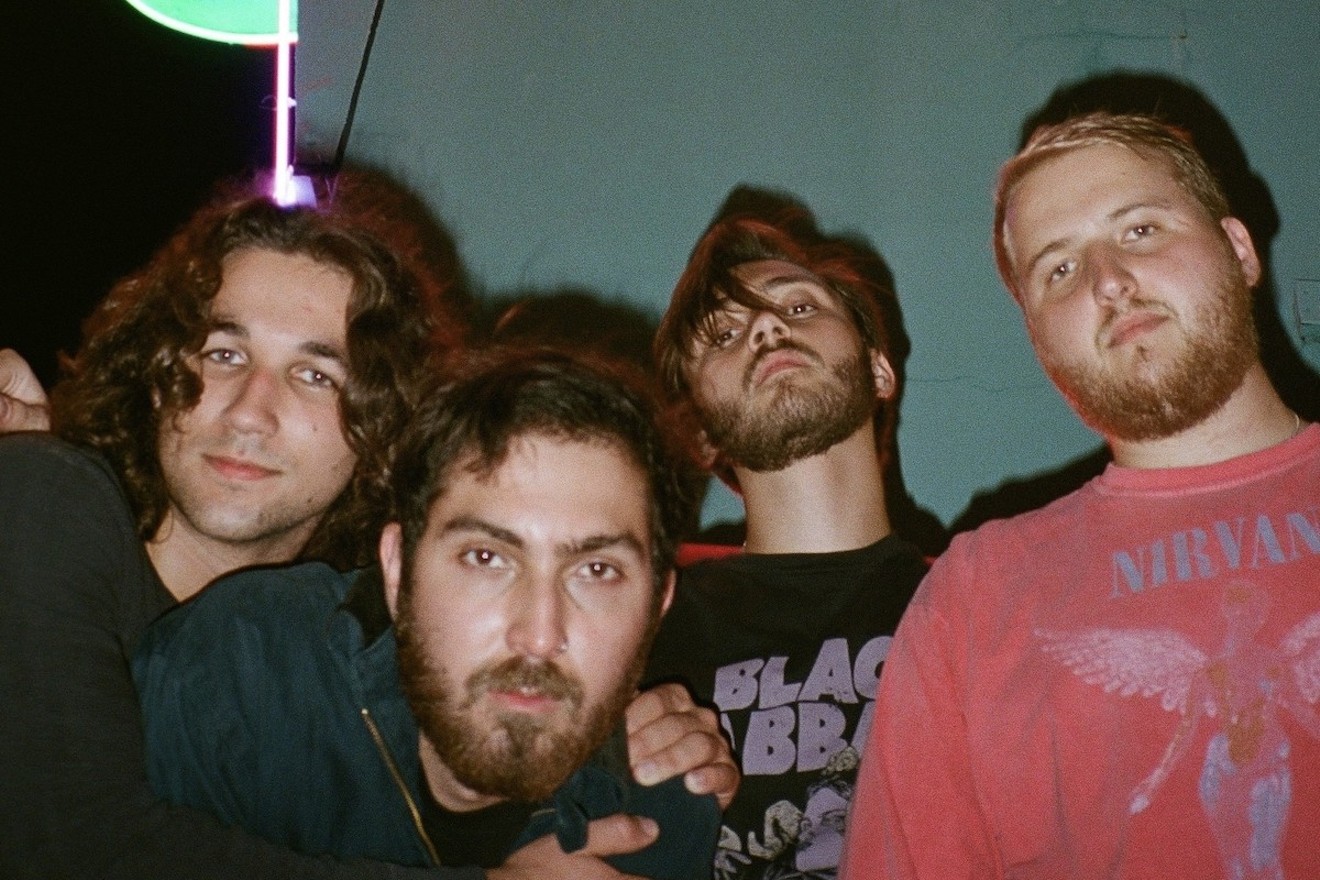 Better Strangers Photo by Andres Birnbaum
Not many musicians who have performed at massive arenas would sound as excited to play a smaller venue, but Nic Collins is.

Recently, Nic got to play drums with his dad, Phil Collins, of the rock band Genesis. He got to keep the beat to pop smashes "Invisible Touch" and "Land of Confusion" at Madison Square Garden and received rapturous applause from audiences and critics.

Still, the Miami native swears he's more nervous about his upcoming show at Gramps with his band Better Strangers than he was playing at London's O2 Arena for a sold-out crowd.

"At arena shows, I sit behind decades of music," Nic tells New Times. "For that, I just have to worry about drumming. With our band each of us is on display, so that can be a lot more nerve-racking."

New Times first spoke with Nic in 2016, when he was 14, for his first-ever interview. Flanked by guitarist Joey Rodriguez and bassist Yang Waingarten, Nic was part of the band What You Know, named after the very first song the trio played together, a track by Two Door Cinema Club. What You Know played anywhere in Miami that would have them, with sets heavy on cover versions of the members' favorite bands like the Red Hot Chili Peppers.

During the pandemic, the three friends decided they wanted to take a different approach to the music they were making.

"We were too concerned about sounding like our influences. We wanted to sound more like ourselves," Rodriguez explains.

The evolution of Better Strangers began when singer Ricky deCasa introduced himself to the band via Instagram.

"The only problem is I live in Texas," deCasa adds.

But the chemistry was strong enough that the band was willing to try a long-distance relationship.

"It's kind of a modern take on a band since now everything is remote," deCasa says. "But I travel to record and for us to go on the road."
So far, Better Strangers has released its first single, "But I Don't Know Your Name," in April. The quartet had recorded other songs, but Collins thought that song was a perfect reintroduction to the band.

"Every element gets explored in that song," Nic explains. "We play heavier music; there's psychedelic elements; we get experimental."

The band's second single, "Nicotine Dreams," comes out on Friday, August 26, the same day as the show at Gramps. deCasa wrote the lyrics while a student at Texas A&M.

"I had a friend who was an emergency responder at the university," he says. "She had to deal with heavy stuff, like talking kids through bringing a friend down who hung himself and giving him CPR. The song tells the story musically of someone dealing with that."

"The song has a progression that keeps building," Collins adds. "Every part of the song is meant to allow the vocalist to tell the story. The song went really well in the live shows."

For Better Strangers, live shows serve as a laboratory for experimentation. The members pay attention to the audience's reaction to determine what songs are working and what parts don't. The band is especially excited to hear what its hometown fans think, as this is only Better Strangers' second-ever Miami show. They say they couldn't have picked a more fitting location for it than the Wynwood bar Gramps.

"When we were teenagers, Gramps was one of the only Miami venues that would let us play," Nic says. "It'll be weird playing without an X written on our hand. We still have underage fans, so it was important they made this show 18-plus."

Though Nic is nervous about Friday's show, his bandmates say they aren't intimidated by Nic's arena-sized chops.

"We feel like Nic set the standard," Waingarten explains. "It's only going to help us grow. He knows how to organize everything, so it makes it easy for the rest of us to do things the right way."

Better Strangers. with Bruvvy. 7 p.m. Friday, August 26 at Gramps, 176 NW 24th St., Miami; gramps.com. Tickets cost $5 via eventbrite.com.
KEEP MIAMI NEW TIMES FREE... Since we started Miami New Times, it has been defined as the free, independent voice of Miami, and we'd like to keep it that way. With local media under siege, it's more important than ever for us to rally support behind funding our local journalism. You can help by participating in our "I Support" program, allowing us to keep offering readers access to our incisive coverage of local news, food and culture with no paywalls.
Make a one-time donation today for as little as $1.