Adult.'s Latest Album, Becoming Undone, Is a Product of Isolation and Grief 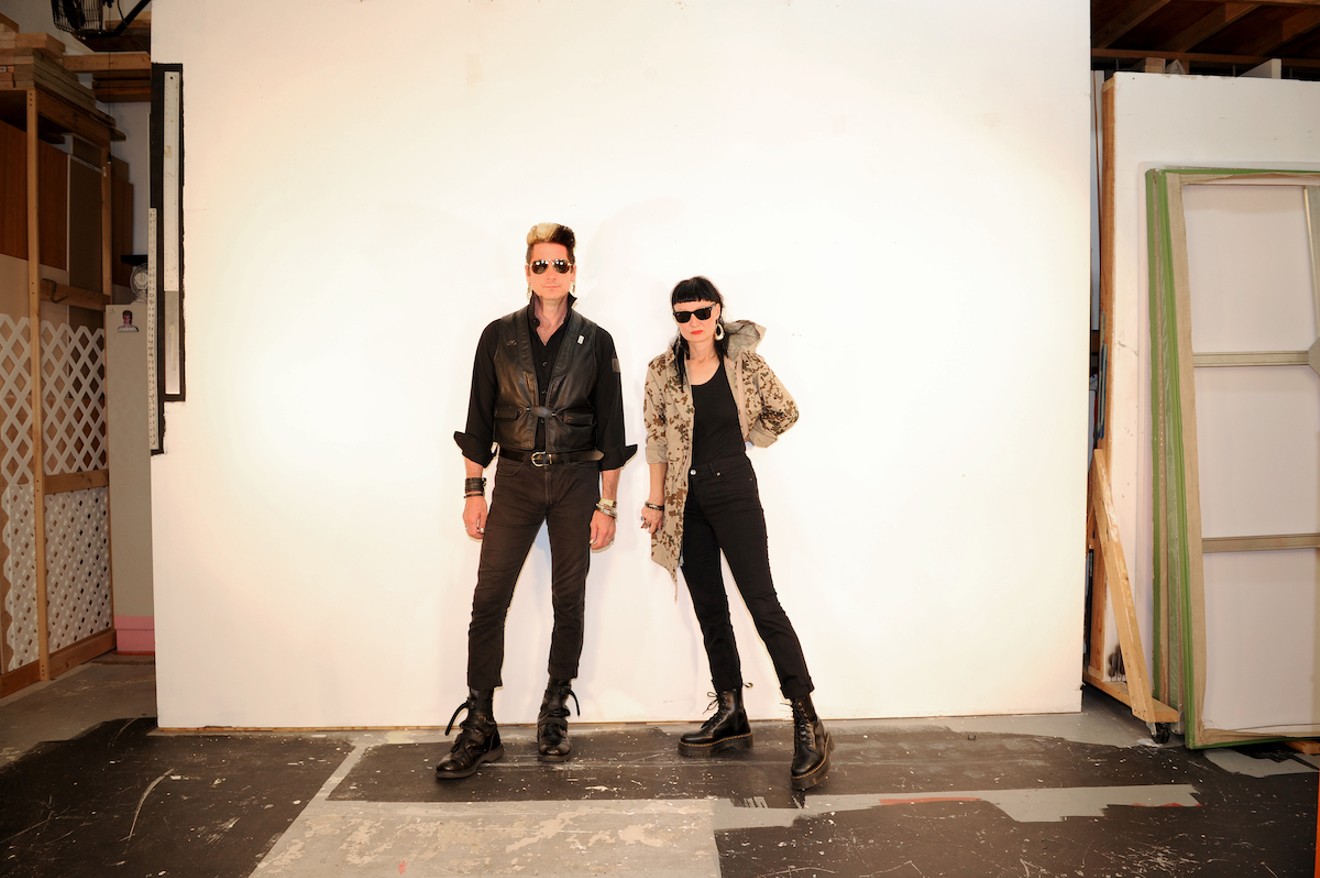 Adult.'s Adam Lee Miller and Nicola Kuperus Photo courtesy of the artist
Like every other musical act during the pandemic, Nicola Kuperus and Adam Lee Miller found themselves unable to tour. As the electronic act Adult., the duo had just released its eighth studio album, Perception is/as/of Deception, only to find itself unable to go on the road to promote it.

Then Kuperus' father fell ill, and the couple, who are husband and wife, had to provide hospice care. Kuperus ' father died at the height of the pandemic when isolation was at its peak.

"We were hurting on money, and then Nicola's father passed away from cancer, and we were his hospice caregivers," Miller says. "That was about a month of that, which was this beautiful, satisfying experience —but obviously very hard."

With so much grief and doom surrounding them, you'd think the last thing Kuperus and Miller could think about was making music. But toward the end of 2020, they set to work on what would become their ninth studio album.

"It would be impossible to have made an upbeat, joyful album; that would have just been completely fake for us," Kuperus explains. "I feel like we're always very reactionary in our work, so the album was really made out of total necessity to just get our shit together and feel like there's some kind of purpose to all of this."

Knowing the circumstances that preceded Becoming Undone's recording, it's impossible not to see the work through a lens of grief. "I felt the world slip, I felt the world slip/Off my tongue.../I touch your face, you touch my face/Between dreams," Kuperus howls in "Our Bodies Weren’t Wrong." In a subsequent track, she laments, "We are drifting, drifting through/A time-limited engagement."
This introspection is set against electro-tinged beats that range from industrial to EBM. The melody often stutters and clangs, adding to the quasi-nihilistic mood of Adult.'s music.

That makes it all the more surprising when you remember that Kuperus and Miller first found success in the underground dance-music scene at the turn of the century. Adult. was lumped into the electroclash genre, along with acts like Miss Kittin, Chicks on Speed, Peaches, and Fischerspooner.

It was a classification that always felt was ill-suited.

"We worked really fucking hard to transcend that label because we absolutely hated it," Kuperus says now. "When we write music, it's more from like a psychological existential point of view. So much of that music was just about fashion and excess, and at the heart of it all, we're really just a punk band."

Adult. felt that its music distinguished itself by the honesty of its emotions, a constant Kuperus and Miller say has carried them along for 25 years. Even though electroclash quickly fell out of favor in underground circles, Adult. has carried on releasing music steadily — usually to critical acclaim.

According to Miller, that's because the pair only releases music they believe in.

"Once [another musician and I] were talking, and we were working on a song for a compilation, and he said, 'Well, I'm just going to give them something I'm not that proud of.'" Miller was aghast at the musician's way of thinking. For Miller, even contributing to a compilation is no reason to release subpar work.

"I told him, 'Everything needs to be topnotch,'" he says. "We've always tried to make sure whatever we write, one of the top ways we examine the song is: Do we think it will have a shelf life?"
Another secret to Adult.'s success: It has avoided repeating itself. The band sees every new album release as an opportunity to surprise longtime fans and win over new ones. That's especially difficult to do in the age of social media, when fans are closer than ever to the musicians they admire. If a fanbase feel betrayed by a change in sound, the band will find out in no time.

Kuperus and Miller would rather upset a few fans than feel as though they're stagnating.

"We work really hard not to repeat ourselves," Kuperus says. "I feel like anytime we've had something popular, it's like, 'OK, 180 from that. Let's not do that.'"

"Early on, we quickly said, 'We're not going to be the same every time,'" Miller adds. "I'm often shocked that our fans have gone with us on all of our journeys. A friend of mine at a concert was like, 'You guys have kind of done the impossible. Look at the audience: You have young people, you have older people. Nobody really does that over 25 years.'"

The band hopes to draw that multigenerational mix when it stops at Gramps for a show on Saturday, April 23. The tour has been a long time coming. In 2020, they were unable to perform songs off of Perception is/as/of Deception for a live audience. This tour, in some ways, serves to celebrate the release of Perception and Becoming Undone.

"It was really hard putting the setlist together because we were like, 'It's gotta be a cross-section between both,' obviously sprinkled around with other stuff," Miller says. "But we're excited because we can tour for two years and constantly add new songs we haven't played. You can get burnt out playing the same set for a year."

Adult. With Kontravoid and Spike Hellis. 8:30 p.m. Saturday, April 23, at Gramps, 176 NW 24th St., Miami; 855-732-8992; gramps.com. Tickets cost $15 via eventbrite.com.
KEEP MIAMI NEW TIMES FREE... Since we started Miami New Times, it has been defined as the free, independent voice of Miami, and we'd like to keep it that way. With local media under siege, it's more important than ever for us to rally support behind funding our local journalism. You can help by participating in our "I Support" program, allowing us to keep offering readers access to our incisive coverage of local news, food and culture with no paywalls.
Make a one-time donation today for as little as $1.