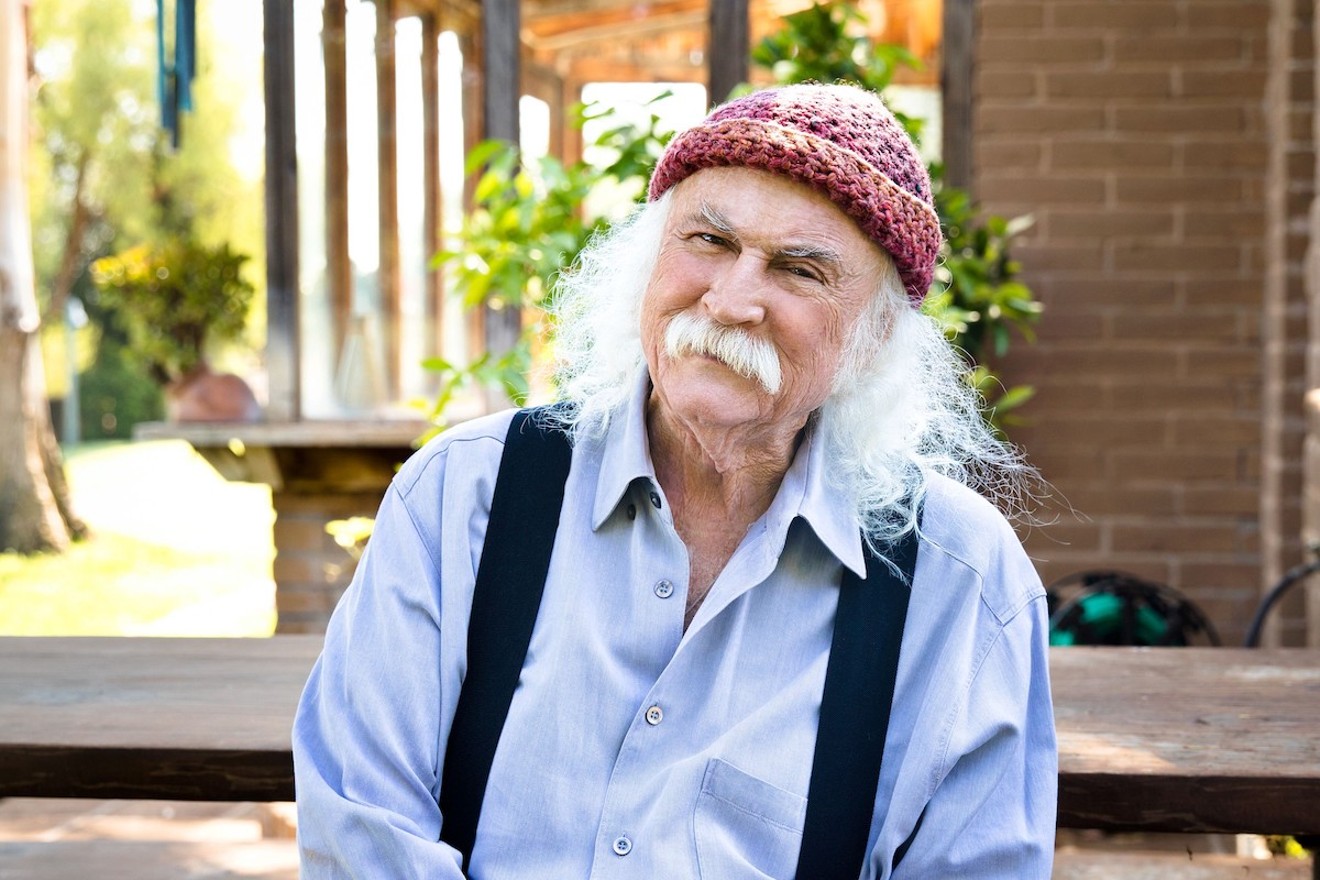 David Crosby Photo by Anna Webber
People rarely mention Coconut Grove as a historic hotbed for folk music, but according to legendary singer David Crosby, the Grove in the '60s was right up there with New York's Greenwich Village. "I was living in New York when someone told me there were coffee shops down in Coconut Grove," he says of Miami's iconic neighborhood. "I put my clothes in a cardboard box, took that box and my guitar on a Greyhound, and stayed on Bobby Ingram's couch. Fred Neil and Vince Martin became my mentors."

Crosby, who later found fame as a member of the Byrds and Crosby, Stills & Nash, has fond memories of living and playing music in the Grove in those early days. "Every night after the coffee shops closed, we'd sneak into the rental boats at Dinner Key. We'd steal a boat at 1 in the morning. That's how we found where the sandbars were," he tells New Times by phone.

His love affair with boats and South Florida led him to discover one of folk music's most popular performers — Joni Mitchell — at the Gaslight in Coconut Grove. "I was thrown out of the Byrds. I was going to buy a sailboat and sail away and quit the music business. I met Joni in a coffeehouse, and she blew me away. I was stunned. I fell for her, which was like falling into a cement mixer — very turbulent girl. I brought her to California, and that was the start."

Crosby's way with storytelling is evident in a new documentary, David Crosby: Remember My Name, due out this year. "You know Cameron Crowe?" he says of the filmmaker behind Almost Famous. "Almost Famous was based on him as a kid, and we were the band. He knew me since he was 15. We've been friends since then, so he asked me the questions in this movie. I didn't want to do a shine job. Some of it is painful to go through. I cry, but that's part of the deal."

Crosby is more than just a walking, talking monument of the folk-rock era. At 77, he's still a vital performer. Anyone who witnessed his acoustic performance at the North Beach Bandshell this past February could testify to the power and beauty that still resonate in his voice. South Florida will have another chance to hear his tunes May 21 at Parker Playhouse in Fort Lauderdale. "This will be with my electric band. It'll be longer. There'll be more Crosby, Stills, Nash & Young and Crosby, Stills & Nash songs. More hits."

There will also be more examples of his newer songs — from four albums released in the past five years. He's halfway finished recording another slab, which will make five solo albums in five years. "I don't know how much time I've got. I'm frantically making as much music as I can. Music is an uplifting force that brings out the best. Music is the only place I can actively contribute."

That's not exactly true. Crosby was recently named an advice columnist for Rolling Stone. "When they asked me, I laughed for half an hour. Who in their right mind would want my advice about anything? My main problem will be not going off on anyone like I did to Kanye West, Donald Trump, and the Doors. I didn't like the Doors. I used to tell people why I didn't like them, but I realized I was hurting people's feelings. I don't want to rain on any parades."

As he reminisces about the '60s, Woodstock comes up. Asked if he's doing anything to commemorate the 50th anniversary of the most famous of concerts he once played, he replies, "I'll sing 'Woodstock.' I was going to play it [at the aborted 50th-anniversary concert], but someone got funny with the money. I know who did it but can't say who."

Instead, he prefers to talk about the long-lost glory days of Coconut Grove.

David Crosby. 7:30 p.m. Tuesday, May 21, at Parker Playhouse, 707 NE Eighth St., Fort Lauderdale; 954-761-5374; parkerplayhouse.com. Tickets cost $47.50 to $107.50 via ticketmaster.com.
KEEP MIAMI NEW TIMES FREE... Since we started Miami New Times, it has been defined as the free, independent voice of Miami, and we'd like to keep it that way. With local media under siege, it's more important than ever for us to rally support behind funding our local journalism. You can help by participating in our "I Support" program, allowing us to keep offering readers access to our incisive coverage of local news, food and culture with no paywalls.
Make a one-time donation today for as little as $1.