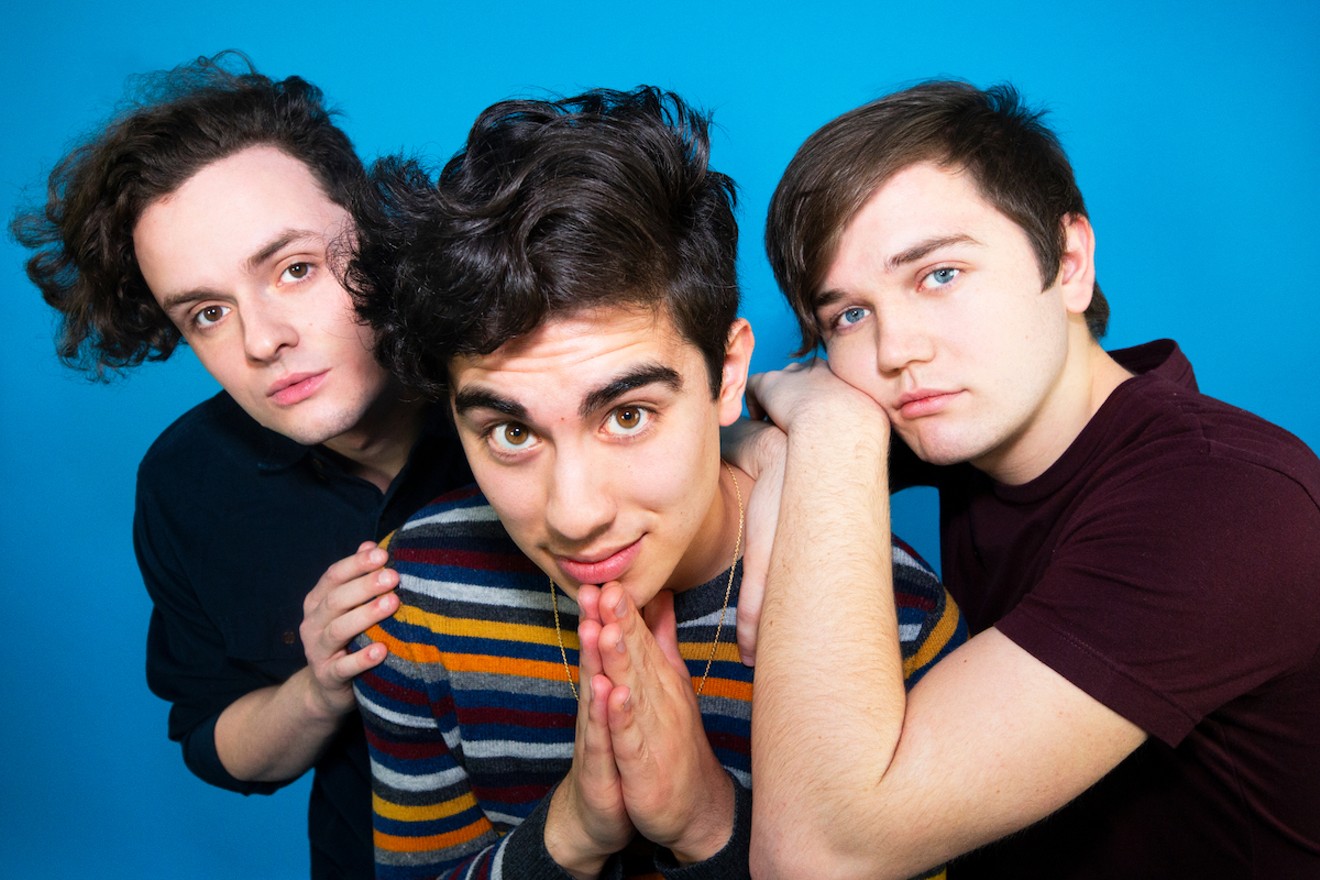 The Happy Fits Photo courtesy of the artist
Back in September, NPR rock critic Ken Tucker noted that the Happy Fits are “making some of the freshest, catchiest pop music around right now.”

The New Jersey band isn't exactly new to the music game. Since forming in 2016, the trio has accumulated over five million streams with the song “Too Late” and tallies 439,944 monthly listeners on Spotify. And this past summer, the Happy Fits released their sophomore album, What Could Be Better, to critical acclaim.

With the band's profile quickly rising, New Times touched base with cellist Calvin Langman and drummer Luke Davis to seek their advice for up-and-coming musicians.

Langman says you can find bandmates in unconventional ways.

“Me and Ross started connecting on Facebook,” he says, adding that he didn't know many kids who listened to indie music. Guitarist Ross Monteith joined the band in 2016 thanks to that online interaction.

The power of social media helped the band in other ways, as well.

“Reed Carson out of Chicago did our 'Hungry People' music video. He hit us up on Instagram,” Langman notes.  And the band had professional photos posted to their social-media accounts that “were taken by a college student, Ellie Thorne. She first reached out online. We got an awesome photoshoot out of it.”

Davis adds that they “have a lot of crazy-talented artists in the fanbase, so they make a lot of cool art,” which is then posted and circulated, bringing attention to the band.

According to Langman, the band's success is “all about that fan interaction. You can’t do it unless you have support.”

Play all the live shows you can.

When the Happy Fits' “While You Fade Away” was placed on Spotify's Fresh Finds playlist, the band’s monthly listeners briefly skyrocketed.

The band decided to start reaching out to fans directly at shows to get their listener numbers back up. The strategy was “to book as many shows as we can possibly play.” The band staged several shows in basements of houses near Rutgers University; “it ended up being a hit to the point where people thought we went to Rutgers.”

Even if you can’t play shows, Langman says there's value in putting your songs out there.

“It’s not very expensive to just put music on Spotify,” he notes.

"Find something you really like, keep the drumbeat the same, then change up the chords a little bit and see where that leads you,” he recommends.

“Sometimes it’s good to let a song sit for a while," says Langman. "Our song 'Get a Job' was a totally different song back in 2016. With writer’s block, sometimes you have to be patient.”

Patience isn’t only good for writer’s block. “Patience is truly a virtue" for aspiring young musicians, according to Langman. “Nothing is going to happen overnight,” he adds.

Langman and Davis both agree that practicing is important if you are hoping to improve.

“It’s always good to have parents that force you to do lessons,” Langman says with a chuckle. “Keep trying at it, even if you get blisters.”

Experiment with your sound.

Davis believes in the importance of experimenting with sound when you are starting out.

“Don’t be afraid to jump into a bunch of different genres,” he says.

The Happy Fits experimented with many different sounds, from indie-folk in their song “Drink” to head-banging rock in “Grow Back.”

"In the beginning, we didn’t know what we were,” Langman admits.

'We’ve honed into indie-rock for sure, but labeling your music isn’t that important,” adds Davis.

Instead of trying to label your music from the get-go, Langman suggests taking inspiration from other artists when starting out.

“I think all [our] songs are just like reflections of Two Door Cinema Club, the Killers, Arctic Monkeys — all that 2000s indie rock,” Langman explains.

According to Davis, the use of an electric cello in the Happy Fits' music serves to set the band apart, describing his reaction to Langman’s use of the stringed instrument as “pretty odd but really good.”

“You just gotta find your voice [and] try all the avenues you can,” Davis adds.

Be open to new opportunities.

Davis says that when starting, be ready for whatever comes your way. Before joining the band, Langman and Monteith had asked Davis to play drums on the first album.

“I remember telling Calvin, ‘Hey, I sing, but it’s not that big of a deal,’ and he just let me in with open arms,” Davis says.

He adds that being open to that opportunity “ended up bringing drums back into my life. [There are] so many opportunities waiting to be taken advantage of that you can really build your career on.”

Langman and Davis emphasize that aspiring musicians shouldn't be afraid to ask for help.

“Don’t be afraid to ask questions,” Langman says as Davis nods in agreement. “Knowing is half the battle, and then comes the commitment part. Everything is a Google search away. We learned everything through Googling and watching YouTube videos. It’s really up to you to find it and then apply it.”
KEEP MIAMI NEW TIMES FREE... Since we started Miami New Times, it has been defined as the free, independent voice of Miami, and we'd like to keep it that way. With local media under siege, it's more important than ever for us to rally support behind funding our local journalism. You can help by participating in our "I Support" program, allowing us to keep offering readers access to our incisive coverage of local news, food and culture with no paywalls.
Make a one-time donation today for as little as $1.