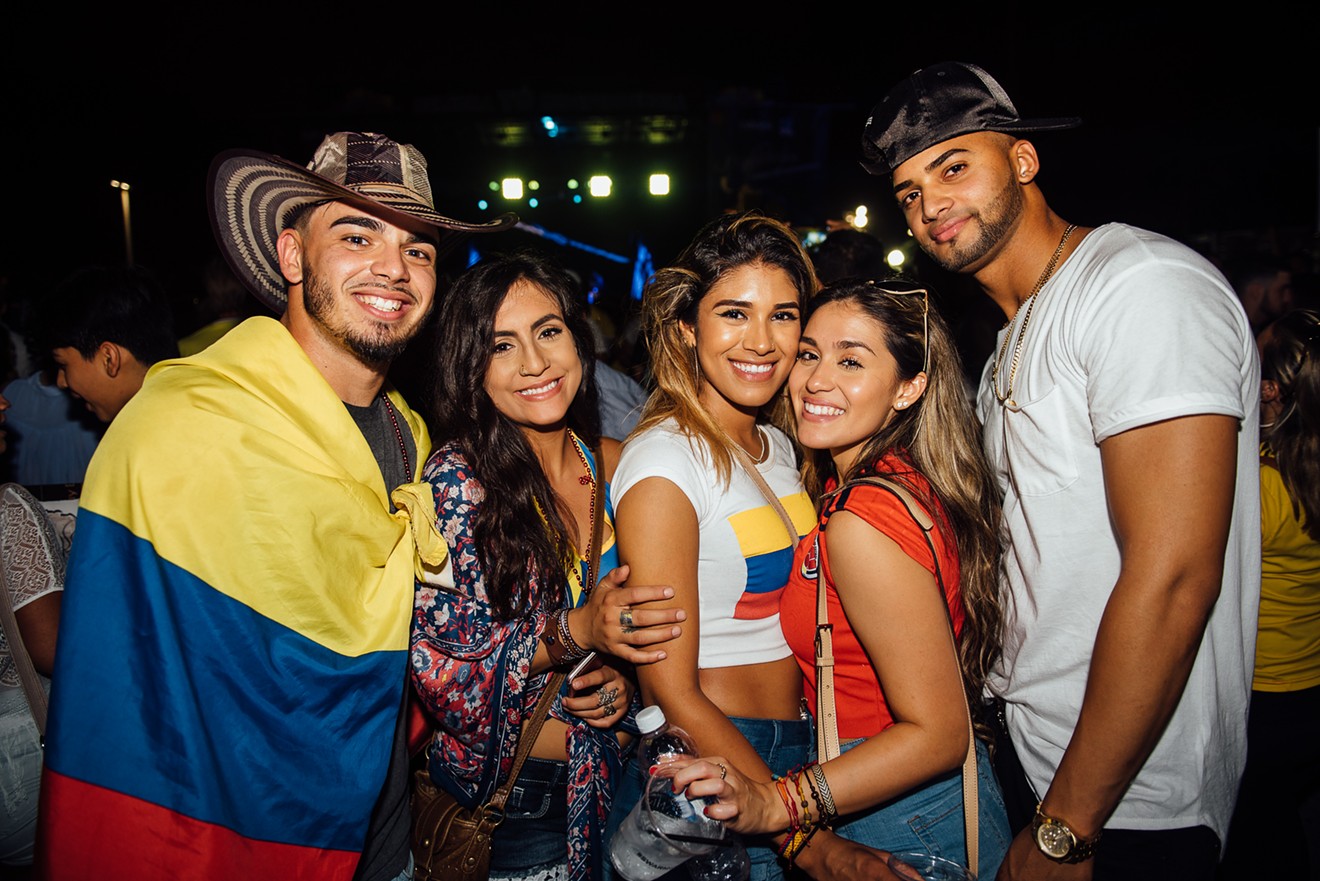 Mega Rumba Photo courtesy of Swarm
Independence day in Colombia means military parades and flags hanging outside of homes and, um, that's about it. The celebrations are surprisingly tame, especially when you consider Colombians usually look for any excuse to party and dance. The truth is the best Colombian Independence Day celebrations take place outside of the country in areas with heavy expat populations, including South Florida.

Every year around July 20, pockets of South Florida get a yellow, blue, and red makeover and are taken over by vueltiao sombreros, the sound of vallenato, and, like it or not, the smell of aguardiente. This year should be even more festive because the holiday falls on a Saturday. Want to know the best places to celebrate Colombian Independence Day in South Florida? We've got you covered, parcero.

Silvestre Dangond concert. Think the accordion is only for polka geeks and Weird Al? Then you’ve never been to a vallenato concert, where sexy couples dance body-to-body to accordion-heavy music. See for yourself as Colombia's own Dangond and his band perform classic vallenato covers from Diomedes Diaz, Los Betos, Los Hermanos Zuleta, and others in what should be a Colombian-pride-filled show. 8 p.m. Saturday, July 20, at American Airlines Arena, 601 Biscayne Blvd., Miami; 786-777-1000; aaarena.com. Tickets cost $28 to $352 via ticketmaster.com.

Rumba Colombiana bar crawl. Proving once again there's a bar crawl for everything, this Colombian-themed one invites you and your parche to celebrate at five of Brickell's Latin spots. Check in at Blue Martini, which will be decked out in Colombian decor, and collect themed beads, hats, glasses, and Colombian candy while supplies last. Then head to Candela Bar Brickell, TuCandela, Baru Latin Bar, and RedBar in whatever order you like. 8 p.m. Saturday, July 20, at Blue Martini, 900 S. Miami Ave., Miami; 305-981-2583; miamibarcrawls.com. Tickets, which include five drink tickets, cost $15 online via eventbrite.com and $25 at the door. 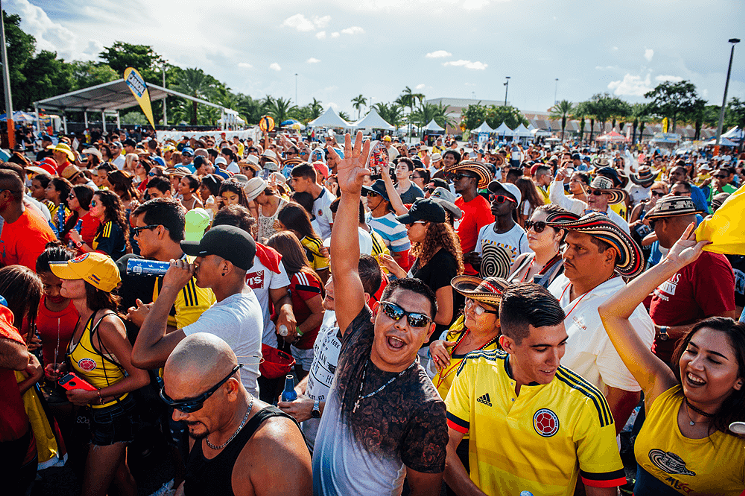 Mega Rumba
Photo courtesy of Swarm
Mega Rumba concert. Once solely a Colombian Independence Day party, Mega Rumba has become more inclusive by dropping "Colombia" from its name and including a wider variety of Latin artists. But this year's concert at Wynwood Marketplace will still have a Colombian influence with a performance by Colombian salsa band Sonora Carruseles. The party will continue at the Deck. The bar will serve Colombia's booze of choice, aguardiente (AKA guaro), which, be forewarned, tastes like black licorice. 2 p.m. Saturday, July 20, at Wynwood Marketplace, 2250 NW Second Ave., Miami; 305-461-2700; megarumba.com. General admission is free; VIP tickets cost $30.

Wharf Loves Colombia Festival. The Wharf invites you to rumbear on the riverfront with a live vallenato band and DJ Kid Nemesis. The outdoor event space will serve free mango biche (seasoned green mango) and aguardiente shots for $3. Your first one is gratis with an RSVP. Food options of the non-Colombian variety include Lung Yai Thai Tapas, Spris Artisan Pizza, and La Santa Taqueria. Noon Saturday, July 20, at the Wharf, 114 SW North River Dr., Miami; 305-906-4000; wharfmiami.com. Admission is free. Fabian Santamaria
Photo by Freddy Sanchez
Carlos Vives tribute concert. If you're at a Colombian Independence Day party and they don't play "La Tierra del Olvido," is it really a Colombian Independence Day party? Expect Fabian Santamaria and his cover band to perform Carlos Vives' classic anthem and many other hits from the the curly-haired singer-songwriter's deep catalogue of rock, pop, and vallenato. The family-friendly event will include traditional Colombian dishes and an exhibit showing dresses from various Colombian regions. 9 p.m. Saturday, July 20, at Boca Raton Children’s Museum, 498 Crawford Blvd., Boca Raton; 561-368-6875. Tickets cost $27 via eventbrite.com.

Festival Folclorico Internacional. Enjoy a night of traditional Colombian food and entertainment with salsa singer Yamil Quijada and cumbia vocalist LuzEle. There also will be a child beauty pageant. Not your thing? Maybe dance troupe Ballet Folclórico Sonia Gómez is more your speed. They're coming in from Colombia to perform. 5 to 11:30 p.m. Saturday, July 20, at Divino Pecado, 10730 NW 25th St., Doral; 786-409-4699; divinopecadomiami.com. Tickets cost $10 via eventbrite.com.
KEEP MIAMI NEW TIMES FREE... Since we started Miami New Times, it has been defined as the free, independent voice of Miami, and we'd like to keep it that way. With local media under siege, it's more important than ever for us to rally support behind funding our local journalism. You can help by participating in our "I Support" program, allowing us to keep offering readers access to our incisive coverage of local news, food and culture with no paywalls.
Make a one-time donation today for as little as $1.