Snarky Puppy set their roots in Miami Beach with GroundUp Music Festival. Provided by Snarky Puppy
Miami's music scene is a conglomerate of genres. Past the late-night dance clubs and dive bars lives a genre of music that was born in the '60s. South Florida seems to be a destination for jam bands, and many have even set their roots here. The scene continues to thrive with events such as Jam Cruise, GroundUp Fest, and Wanee Festival and venues like the Funky Biscuit and the Fillmore. Here are some bands working hard to keep it alive.

Snarky Puppy hosts GroundUp Music Festival at the North Beach Bandshell every year.
Photo by Stella K
1. Snarky Puppy. The three-time Grammy-winning and Brooklyn-based jazz/funk band Snarky Puppy hosted the second GroundUp Music Festival this past February at the North Beach Bandshell, featuring international jazz, jam, and fusion bands. The three-day event is truly like no other. Masterclasses have been hosted by featured musicians such as Robert Glasper, Victor Wooten, and Snarky Puppy founder, composer, and bassist Michael League. Fans from around the world have flocked for the past two years to witness three days of jams in the cool and tropical Miami Beach weather. Visit snarkypuppy.com.

Unlimted Devotion frequents Miami venues such as the Wynwood Yard.
Photo by Kevin Tighe
2. Unlimited Devotion. Look into your hippie uncle's record collection and you might find an array of Grateful Dead albums. Maybe you should satisfy his inner Deadhead and invite him to an Unlimited Devotion show. This band is one of America's favorite Grateful Dead cover bands, offering its own take on the music with jazz and funk influences. If you happen to walk into one of their shows, you'll find a crowd of aging Deadheads dancing and spinning with eyes closed and smiles on their faces while they reminisce about the Jerry Garcia days. Visit facebook.com/UDMusic.

Based in Fort Lauderdale, The Heavy Pets have played over 1,200 shows across the country.
Photo Courtesy of Omni Arts Group
3. The Heavy Pets. This South Florida-based American jam band made its way through small local venues before reaching its ultimate success. In 2005, you would have found them playing at bars such as Fat Cats, Alligator Alley, and Tobacco Road. Their big break came in 2006 at the dearly departed Langerado Music Festival, a weekend-long extravaganza headlined by big names like Ben Harper and Wilco. The Heavy Pets are known for their energetic live shows, and besides consistently touring nationally, the band frequently returns home to play venues such as Culture Room. Visit theheavypets.com. 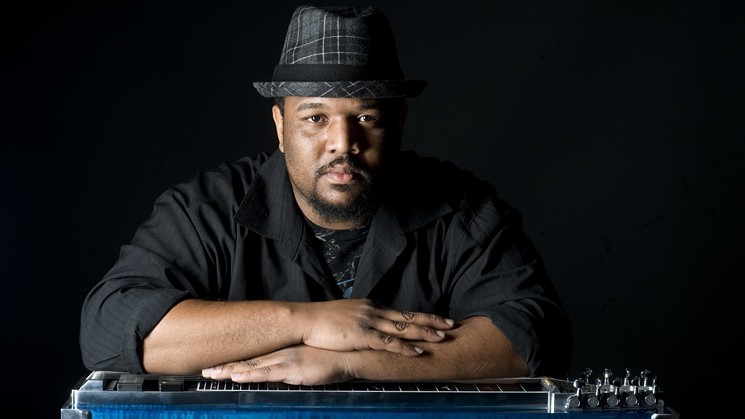 Photo by Michael Weintrob
4. Roosevelt Collier. This pedal steel guitarist was brought up in the House of God Church in Perrine and started his music career playing with his uncles and cousins from the gospel/funk band the Lee Boys. Now, Roosevelt Collier, AKA "The Dr.," finds himself touring with various artists all over the world. The list of musicians and bands with whom he's collaborated is extensive, including Gov't Mule, Snarky Puppy, Heavy Pets, Tedeschi Trucks Band, and even the home-state fave Unlimited Devotion. His talent on the steel guitar is immeasurable and best experienced live. His most recent album, 2018's Exit 16, is a potent mix of blues, gospel, rock, and, in his words, “dirty funk swampy grime." Sounds like a true Floridian. Visit facebook.com/rooseveltcollier.

Gregg Allman made a surprise appearance at The Funky Biscuit after Sunshine Music Festival in 2016.
Photo by J Skolnick
Honorary mention: The Funky Biscuit. Fine, the Funky Biscuit isn't a band, but this Boca Raton venue is so legendary in South Florida's jam scene we had to include it on this list. Since its inception in 2011, the venue has become a Southern-style jam-music hub, hosting a jam night every Monday. Boasting performances by both local bands and legendary musicians such as Gregg Allman, the Funky Biscuit is where you can go to experience what South Florida's jam scene is about. 303 SE Mizner Blvd., #59, Boca Raton; 561-395-2929; funkybiscuit.com.
KEEP MIAMI NEW TIMES FREE... Since we started Miami New Times, it has been defined as the free, independent voice of Miami, and we'd like to keep it that way. With local media under siege, it's more important than ever for us to rally support behind funding our local journalism. You can help by participating in our "I Support" program, allowing us to keep offering readers access to our incisive coverage of local news, food and culture with no paywalls.
Make a one-time donation today for as little as $1.