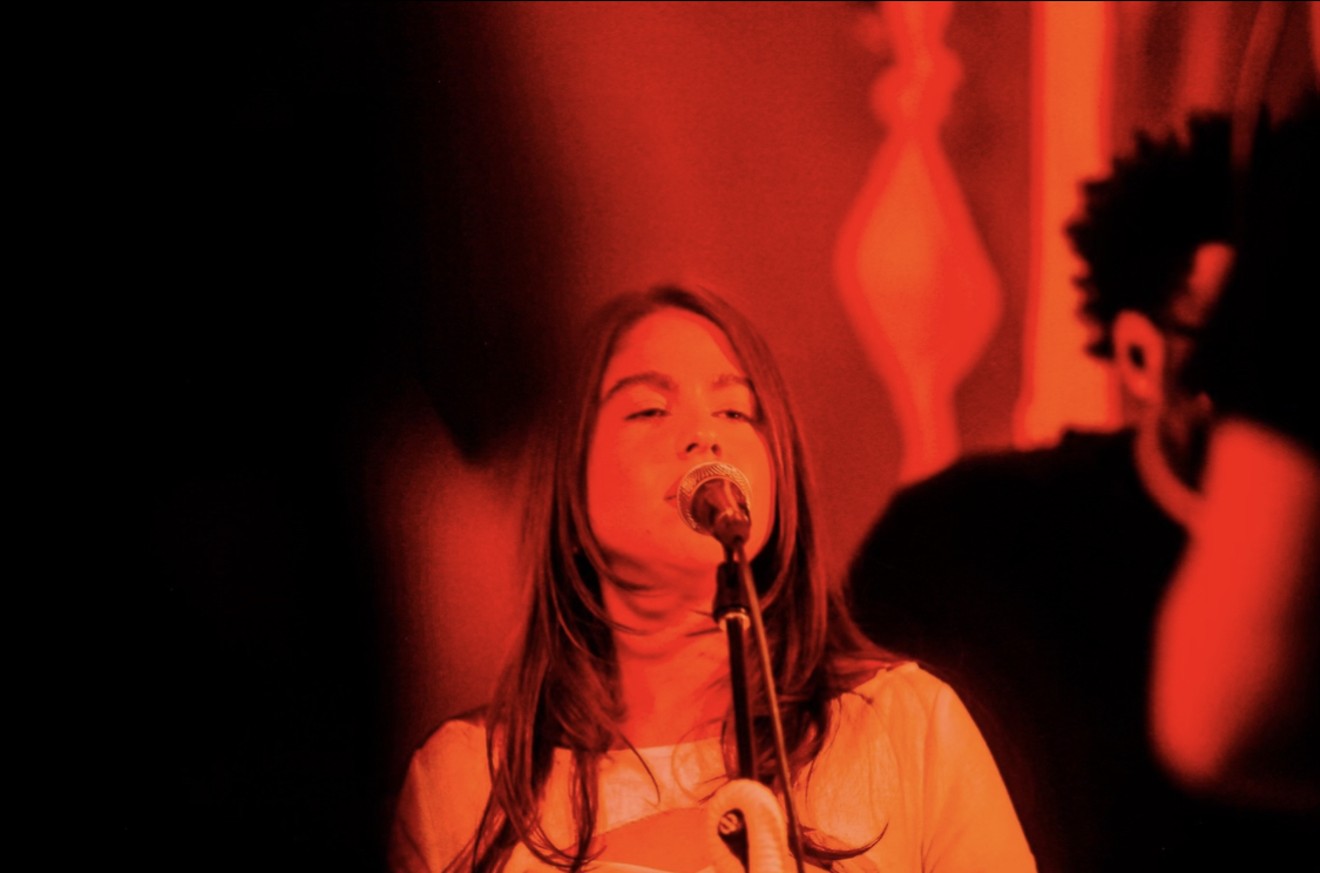 Miluhska has released her debut single, "Loba," via Tigre Den. Photo by Max Barone
Miluhska sits along a quiet street corner in Brickell. The singer's petite frame is hidden underneath an oversized pink and black checkered sweatshirt. Her loose waves move with the wind as she tucks a few strands behind her ear.

The 24-year-old singer-songwriter began her career during the pandemic. Like many, she found herself out of a job and with a newfound opportunity to actively chase her passion: music. As a young child, Miluhska would sing and write poetry. She's always been drawn to music, and in 2020 she taught herself how to DJ and started to perform via livestreams and eventually at local clubs.

Two of her closest friends, Alyssa Lamas and Natacia Zunjic, coincidentally began to spin music around the same time, so Miluhska brought the trio together under the DJ collective Roujeee Tunes.

"One day, I just called them up and said how we should join forces and how I wanted to start a record label and this and that," she says, holding her pinky and thumb in the shape of a phone up to her ear as the acoustic melody of Ed Sheeran's "Afterglow" plays on the loudspeaker above. "I had no idea what I was talking about or how much hard work would go into this. I just knew I wanted to be a DJ and play music."

Although Miluhska still performs as part of Roujeee Tunes, she's also ready to launch her solo career as a singer and performer.

Before embarking on this new musical adventure, Miluhska admits she was plagued with doubt and insecurities. She pushed herself out of her comfort zone, enrolled in music school, and started to take vocal lessons as well as practice singing in front of a crowd.

The singer has collaborated with a handful of artists, mainly in the electronic dance music realm, but in September, she launched her solo career with the release of her first single, "Loba," via local imprint Tigre Den.

"The fact that I'm [releasing my first single] at Tigre with [Isabella Acker], it's a full circle moment," she adds.
Prior to linking up with Acker, Miluhska says she felt overlooked and that many people dismissed her singing and songwriting talents.

"Izzy is fully invested in me," she says. "She opened up creative doors in my brain that I didn't know were there."

Miluhska describes the first time meeting Acker: The two sat and listened to music together for hours. Acker later invited the singer to her studio to jam out, and from that fateful session, their working relationship was solidified.

"I worked my ass off [this last year]," she says matter-of-factly. And indeed, she's reaping the fruits of her labor. In October, the 24 year old will perform at III Points as part of her DJ collective and as a solo act. "It's been really fulfilling to know that if you put in the hard work, you'll get to where you want to be."

A car drives by in the background blasting ABBA's "Mamma Mia." Miluhska stops to laugh and sings along, "My, my, how can I resist you?"

Becoming a DJ, in many ways, saved Miluhska. Through music, she was able to pull herself out of a dark place and pursue her passion. In the same vein, stepping into herself as a singer allowed her to rediscover her youthful pursuits, giving her a new sense of self and purpose.

"I know it sounds corny," she says, "but I just feel complete. DJing and singing are two worlds that I want to live in the same solar system because they're both a part of me."

The musician is currently working on new songs in both English and Spanish and preparing for her upcoming festival performances. Her vocals are buttery smooth, living somewhere between soul and R&B.

"I think it's such a fun thing that people are doing right now, mixing genres, and that's what I'm trying to do," Miluhska says. "I'm always going to want to try and do something new."
KEEP MIAMI NEW TIMES FREE... Since we started Miami New Times, it has been defined as the free, independent voice of Miami, and we'd like to keep it that way. With local media under siege, it's more important than ever for us to rally support behind funding our local journalism. You can help by participating in our "I Support" program, allowing us to keep offering readers access to our incisive coverage of local news, food and culture with no paywalls.
Make a one-time donation today for as little as $1.