Swedish House Mafia Connected the Dots at FTX Arena, Leaving a Mark for the World 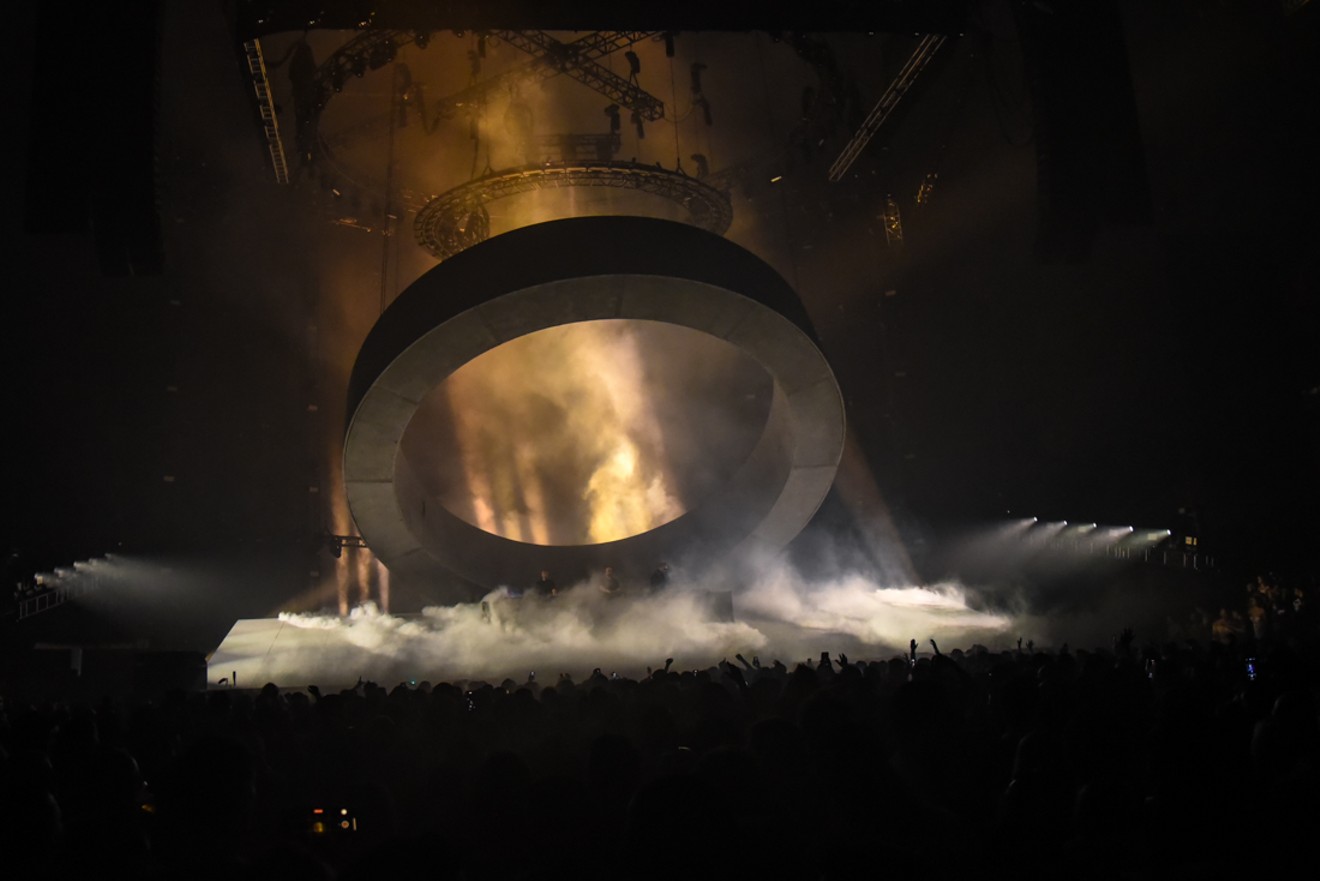 Several shows have already been canceled, and rumors of low ticket sales loomed at the outset of the world tour. And with only about half the seats filled by 9:15, the rumors seemed on point.

Opener Grimes opted for a DJ setup instead of her indie-laced live sets. She spun EDM bangers — a sound Swedish House Mafia left behind in its debut album, Paradise Again — including a high-octane remix of Mariah Carey's "All I Want For Christmas Is You." (Hey, an eager producer will remix anything.) However, as she concluded by mixing Vivaldi's "La Primavera" and a bone-crushing techno finale, the foundation, both sonically and structurally, was being laid.

From 9:30 to 10:00, during the 30-minute stage setup — whether through divine intervention or the power of music and love — every seat in the arena filled (the show was sold out), and the first bits of noise rang out by 10:02. See more photos from Swedish House Mafia at FTX Arena here.
Photo by Michele Eve Sandberg
The rattle and hum of "Can U Feel It," off Paradise Again, buzzed through the speakers while the trio stood behind a black curtain as fog floated around the members' black shoes. Strobes and powerful white lights (score one for the rave aesthetic) shone before the curtain, and the beat dropped.

The crowd stood behind a sea of its own cellphone videography as the Swedes transitioned into "Greyhound," a track released in 2012, at the height of the EDM boom.

Axwell took to the mike to welcome Miami, and perhaps the world, to a proper Swedish House Mafia showcase. The three shared an elongated DJ deck buttressed by a slanted floor design and, hovering overhead, a massive gray circle that tilted and lowered over their heads like an electronic halo.

The crowd danced with joy for each nostalgic shot of buzzy synths, syncopated claps, and big-room energy coursing through an actual big room.

"You know there is a song about Miami, right," Axwell told the crowd. "Miami, we love you right now," before launching into 2010's "Miami 2 Ibiza."

Angello previously told New Times that the performance was meant to be a rave, a show that relied on prime lighting and the trio's primal energy and less about the need to tell the journey through LED animations. He didn't lie. The lights changed with every track going from shades of blues and rose gold for euphoric buildups and inferno red for bass-heavy, darker music like their techno-adjacent track "Redlight." Emanating from the halo came its own sets of lights, where a set of strobes chased itself like a dog trying to bite its tail and building off the euphoric chanting and deep emotional melodies from Ingrosso's track "Laktos." The band traded out four-on-the-floors with snares when dropping the hip-hop-infused Ty Dolla $ign collaboration "Lifetime" before returning to those gritty, acerbic synth chords that cut differently.

Of course, the main-stage buildups were filtered and injected with "let me see your hands" mantras, but Swedish House Mafia also took this as an opportunity to make energy with experimentation. The trio's 2010 opus "One (Your Name)" was stretched, then condensed, and distorted to an almost Aphex Twin level that felt like three young friends just messing around on the synths, hoping something good came out of it.

"Axwell once told me that we would have a rave in a Miami," Ingrosso told the crowd. "Well, here we are." The trio blended tracks with other songs — like wringing out the vocals off of 2008's "Leave The World Behind" with fast-paced breaks. "People can you hear me/There's a message that I'm sending out." You best believe the audience was singing along.

The trio had the chance to play its collaboration with the Weeknd, "Moth to a Flame," and the catharsis of "Heaven Takes You Home," featuring Connie Constance — all off Paradise Again, a milestone in that it's the group's first full-length project and a testament to the dexterity, keen ears, and bold, unexpected production that carried the Swedes to stardom.

See more photos from Swedish House Mafia at FTX Arena here.
Photo by Michele Eve Sandberg
Axwell took the mike again and began talking about friends. He nodded to the new friends and the old ones, too, before the trio launched into the finale, the 2012 anthem "Don't You Worry Child."

The track extended into 2011's "Save the World" before jumping back into "Don't You Worry Child" to close out.

Swedish House Mafia promised a rave, but it was not simple. In reality, the Paradise Again Tour is a concert, festival, and rave all rolled into one. It was a concert for breaks between songs and speaking to the crowd, a festival for the quick track selections and the fact this was a 90-minute set after all, and a rave thanks to its futuristic set design.

The lights, lasers, and pyrotechnics ran rampant while the halo shone down like some EDM god canonizing the three for their years of work. I instantly regretted my years of bashing the EDM sound, pretending the work of Swedish House Mafia didn't lead me to the music I live for now.

As the last minute of concert lighting stayed on and the final hums of "Don't You Worry Child" rang out, Axwell took to the mike once more: "My name is Axwell — and you are fucking Miami."

- "Can U Feel It"
- "Greyhound"
- "Miami 2 Ibiza"
- "Sacrifice"
- "19.30"
- "We Come, We Rave, We Love"
- "Calling On"
- "Laktos"
- "Lifetime"
- "Be" vs. "Show Me Love"
- "Frankenstein"
- "More Than You Know"
- "Antidote"
- "Redlight"
- "Dream Bigger"
- "One (Your Name)"
- "Don't Go Mad"
- "Buy Now - For Sale (Swedish House Mafia Rework)"
- "Time"
- "Leave the World Behind"
- "Turn on the Lights Again"
- "Moth to a Flame"
- "Heaven Takes You Home"
- "Don't You Worry Child"/"For You/Save the World"
KEEP MIAMI NEW TIMES FREE... Since we started Miami New Times, it has been defined as the free, independent voice of Miami, and we'd like to keep it that way. With local media under siege, it's more important than ever for us to rally support behind funding our local journalism. You can help by participating in our "I Support" program, allowing us to keep offering readers access to our incisive coverage of local news, food and culture with no paywalls.
Make a one-time donation today for as little as $1.