The interior of the Olympia Theater Photo by Alex Markow
Miami is in many ways a forward-thinking city. Its developers are increasingly obsessed with over-development, often coming at the cost of gentrifying communities or tearing down some of Miami's most beloved venues. In 2014, after almost 102 years in business, Miami's Tobacco Road closed down with a blowout music festival after losing ground to encroaching Brickell condo and mall development.

But many of Miami's most historic music venues are still standing and going strong. Some, like the Old RC Cola Plant, have undergone reinventions and come back better than ever. Others, like the Olympia Theater and the Fillmore Miami Beach, have defied repeated efforts to tear them down after community protest. With locals' engagement and support, these venues can keep bringing some of Miami's favorite artists to town for another hundred years. Here's a roundup of some of Miami's most historic music venues.
1. The Lyric Theater. Built in 1913, the Lyric Theater is a touchstone of cultural history, and particularly African-American history, in Overtown. The Lyric was once part of a sprawling arts community known as "Little Broadway." Luminaries from jazz great Duke Ellington to poet and activist Langston Hughes graced its stage in its heyday. Today the Lyric Theater is officially known as the Black Archives Historic Lyric Theater Cultural Arts Complex, after the Black Archives, History and Research Foundation of South Florida acquired the venue in 1988. It was listed on the National Register of Historic Places in 1989. Today, the Lyric is once again hosting some of Overtown's top talent through events like Lyric Live, an Apollo Theater-style talent showcase entering its fourth season in 2018. 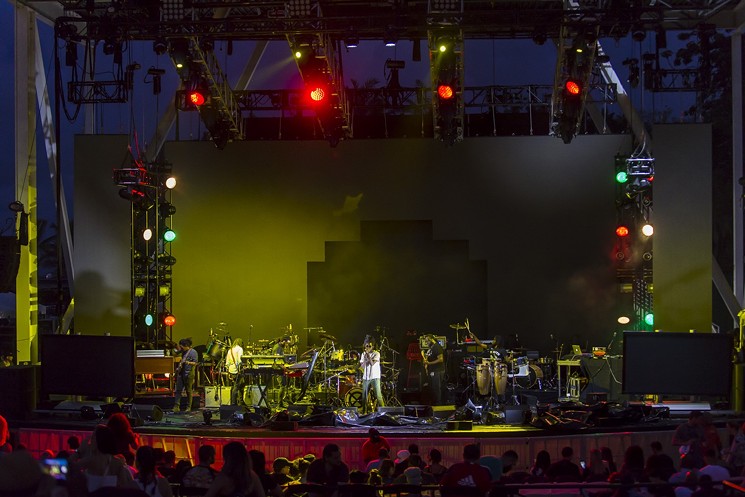 Bayfront Park Ampitheater
Photo by Alex Markow
2. Bayfront Park. You may know it best as the venue where you rang in 2018 with Pitbull, but Bayfront Park has one of the more interesting histories of any of Miami's music venues. Construction began in 1924, and it's a wonder it's still here because it appeared doomed from the start. The battle for the site between the City of Miami and Henry Flagler's Florida East Coast Railway went all the way to the Supreme Court, and just one year after Bayfront officially opened, the infamously devastating 1926 hurricane rolled through and damaged many of the property's buildings. In 1928, the city replaced the venue's original bandstand with a larger band shell, but it was destroyed in a fire just one month after completion. The city immediately got to work on a replacement band shell with enough seating for 4,000 people. Once the 1920's were over, surely God cut the City of Miami some slack on Bayfront Park, right? Wrong. In 1933, Bayfront Park was the site of an assassination attempt on the life of President Franklin Delano Roosevelt. The shooter, anarchist Guiseppe Zangara, missed FDR, but he struck Chicago Mayor Anton Cermack instead. Cermack died three weeks later.
3. The Olympia Theater. This breathtaking downtown venue opened in 1926 as a silent movie theater and has the distinct honor of being Miami's first air-conditioned building. Its ceiling, painted like an evening sky with twinkling "stars," looks more like something you'd see inside Caesar's Palace in Vegas than in downtown Miami. Not only are the Olympia's aesthetics awe-inspiring, but the roster of artists who've taken the stage at the theater reads like a who's who of 20th century American icons. It hosted Etta James, B.B. King, and the Marx Brothers, and in 1956 Elvis Presley played 15 sold out shows at the theater. The Olympia celebrated 90 years of history in 2016. Today it is the official monthly host of the Moth, a popular storytelling event, and concerts are still very much a part of the theater's mission. In recent years they've hosted performances by indie rock royalty the Jesus and Mary Chain, Ben Folds, and Sufjan Stevens. 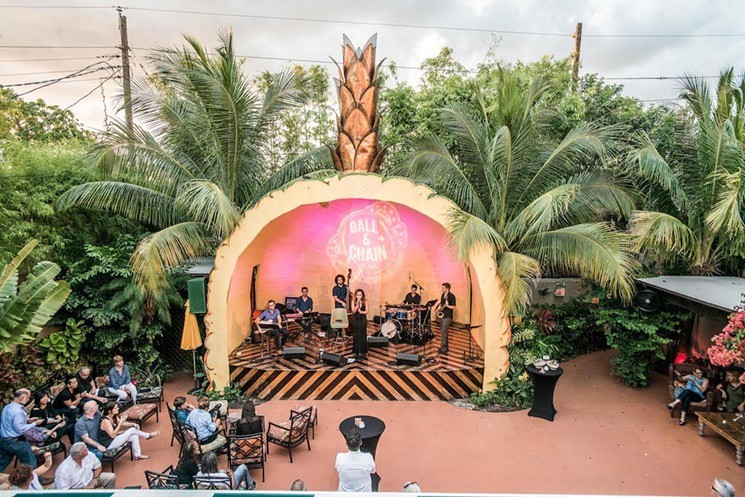 Ball & Chain's Pineapple Stage
Photo courtesy of Ball & Chain
4. Ball & Chain. Before it was home to the outdoor Pineapple Stage, Ball & Chain was a popular nightclub during the golden age of jazz. The lounge counts Billie Holiday and Count Basie, among many others, as past performers. Though the Little Havana venue reopened only a handful of years ago, Ball & Chain's owners are eager stewards to the history inside its walls, which are adorned with recreations of original posters from the days Chet Baker and other jazz greats played on its stage. In its new incarnation, the Ball & Chain is home to some of Miami's top modern jazz talent, and its long weekend music festivals have become Calle Ocho block parties. RC Cola Plant
Photo by Karli Evans
5. RC Cola Plant. This one only recently became a music venue in the wake of this decade's tourist-friendly arts explosion in Wynwood. For the last few decades, this former Royal Crown Company cola plant, built in 1935, had deteriorated from a bustling mid-20th Century factory to a decaying abandoned building, known only to resourceful graffiti artists who trespassed to decorate its walls and the photographers who documented the chameleonic evolution of the three-dimensional canvas. In recent years the plant received renewed interest from the art world and curious Art Basel crowds, and it became part of Mana Wynwood's event venue space. The old RC Cola plant has now become home to festivals and block parties like Wynwood Fear Factory, Wynwood Life Festival, and Trap Circus. 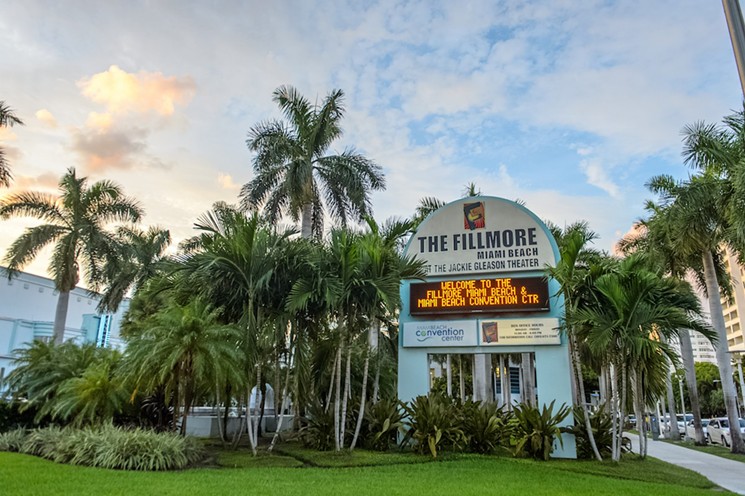 The Fillmore Miami Beach
The Fill
6. The Fillmore. Miami Beach's Fillmore at the Jackie Gleason Theater was once the lap of luxury for artists of the golden age of film and television. Ed Sullivan filmed his show there when it shot in Miami, and the theater was a favorite hangout for icons like Bob Hope, Jack Benny, and Frank Sinatra. It's a fair bet that Ol' Blue Eyes knocked back his fair share of Jack Daniels at the glamorous venue. But Miami has a bad habit of killing its idols, and the Fillmore, now a LiveNation venue, has had to fight incessant efforts to tear it down. As recently as this past summer, a seven-member Blue Ribbon Committee — formed by former Miami Beach mayor and now Florida gubernatorial candidate Philip Levine, recommended that the Fillmore be torn down in favor of a convention center hotel. That's right — they want to tear down Miami's most frequented mid-sized music venue, one that has hosted everyone from Lana Del Rey to Grizzly Bear to Kendrick Lamar and even former president Obama in recent years, to build yet another massive hotel in Miami Beach. Remember that around election time, live music fans. North Beach Bandshell
Photo by Luis Olazabal for Rhythm Foundation
7. North Beach Bandshell. This open-air amphitheater boasts the best backyard in Miami, as it's only about a block or two away from one of Miami's most beautiful beaches. The Bandshell was built in 1961 and is on the National Register of Historic Places due to its Miami Modernism or Mid-Century Modernism architectural style. It hosted musical acts and television shows in the '60s, and in the '70s it was adapted into a beachside roller rink. After a 2011 remodel, the Bandshell became home to some of the Rhythm Foundation's most celebrated concerts and festivals including Ibeyi (twice) and the TransAtlantic Festival. It also became the site of Community Arts and Culture's Afro Roots World Music Festival, which celebrates its 20th anniversary this year.

Churchill's Pub
Photo by Alexander Oliva
8. Churchill's Pub. It's not a stretch to say that generations of Miamians have grown up at Churchill's. Promoter Dave Daniels opened the all-ages dive bar in 1979, and since then it's hosted every local band that needed a place to start. Churchill's still manages to bring in top talent despite the creation of new music venues in the Little Haiti dive's surrounding neighborhoods. Marilyn Manson and the Mavericks got their start there, cult legends like Charlie Pickett were regulars, and last year Miami New Times profiled its recent bookings of old school hip-hop legends like Dead Prez and Raekwon. Daniels sold the venue in 2014, starting a panic in the South Florida music community that the beloved venue might go down, but since new ownership took over, not much has changed, and the crowds who continue to pack inside the venue for shows seem to like it that way. 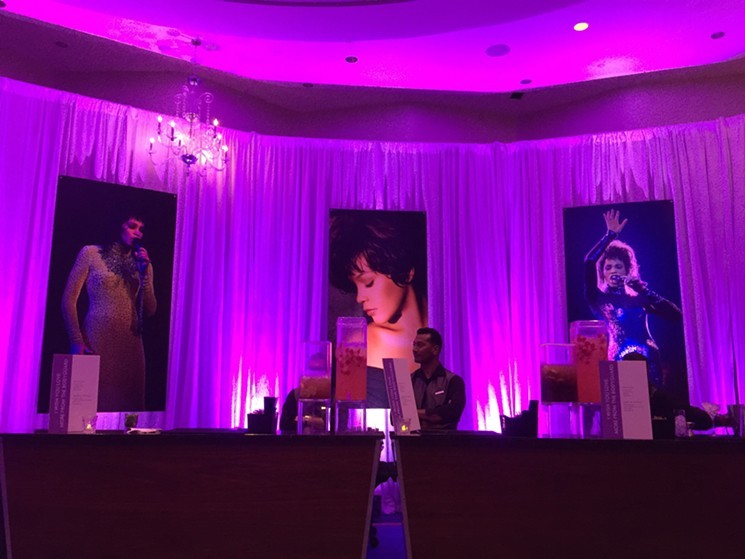 Fontaine Ballroom at Fountainebleau Miami Beach
Photo by Celia Almeida
9. Fontainebleau Miami Beach. When you think of music at the Fontainebleau hotel in Miami Beach, you probably think of celebrity-studded New Year's Eve blowout concerts or seeing the world's top EDM DJs at LIV. But the Fontainebleau has a storied music history outside of the club. Frank Sinatra shot scenes from the 1959 film A Hole in the Head at the pool, but the hotel's most famous musical connection is Whitney Houston's iconic performance of "I Will Always Love You," from The Bodyguard movie soundtrack. Houston sang her unforgettable rendition of the Dolly Parton classic live on the stage of the hotel's Fontaine ballroom. In November, the Houston family celebrated 25 years of the movie's success with a listening party and film screening in the exact same room where Houston filmed the scenes.

Miami Marine Stadium
Photo by Ian Witlen
10. Miami Marine Stadium. Like the RC Cola plant, the Miami Marine Stadium seemed destined to become an abandoned photographer and graffiti artist playground after it was designated as condemned in the wake of Hurricane Andrew. Built in 1963, the waterfront stadium was mostly home to sporting events, races, and boating competitions in the decades before Andrew. Miami resident Gloria Estefan took interest in the venue's potential and contributed funds to its renovation efforts. In 2016, Heineken hosted a crowdfunding campaign and concert to further revitalization efforts, and last year the Tequila Bay Country Music Festival became the first musical event to take place at the stadium since its public reopening.