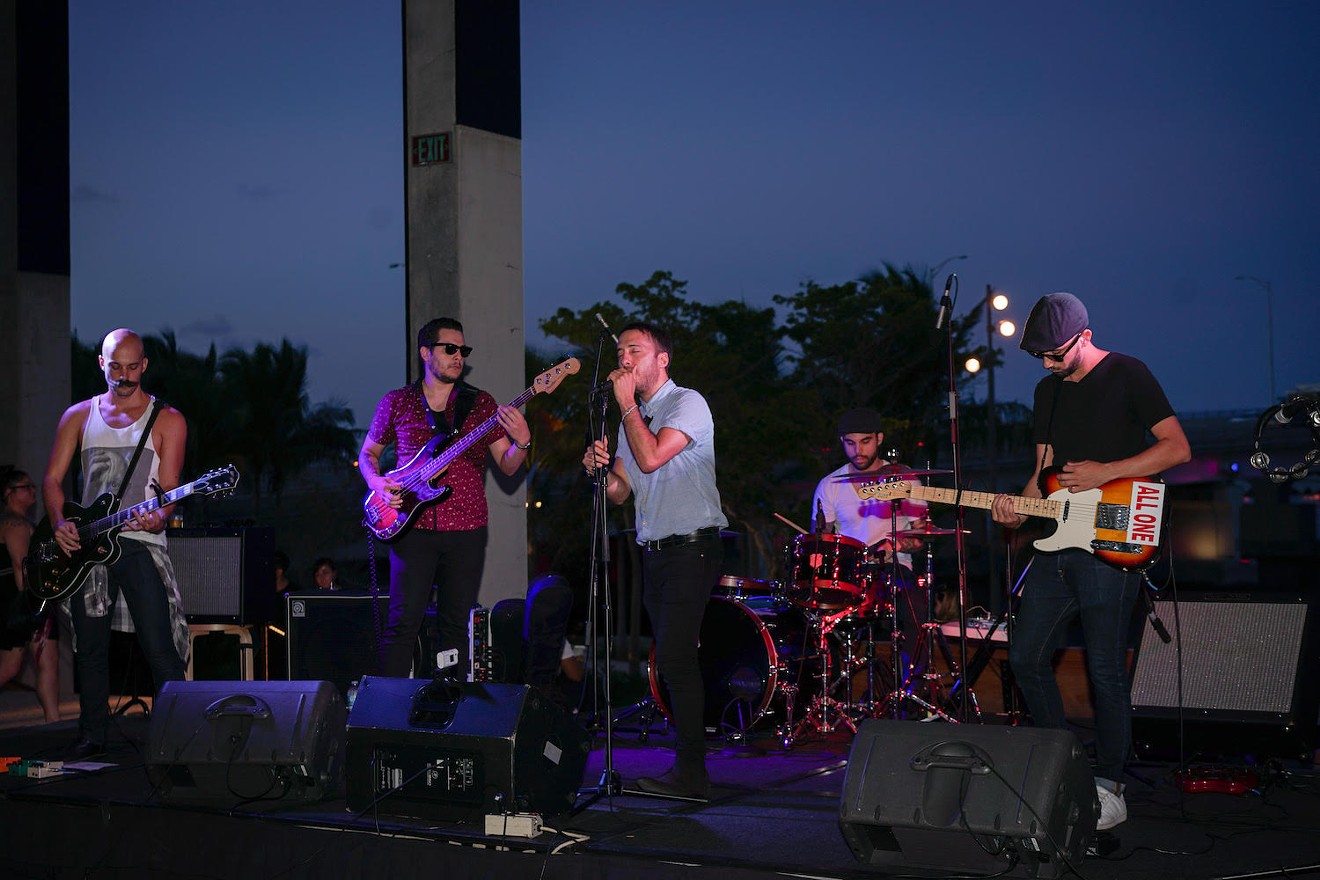 Listen to Modernage's "End of the Road." Photo by Izzy Silva
Anthony Bourdain was no stranger to the Magic City's grittier corners. Aside from being a writer, eater, storyteller, traveler, TV host, and chef, he was also a rock 'n' roll lover through and through. Bourdain enjoyed a cheap, cold beer from South Beach's Mac's Club Deuce, one of his favorite dive bars, just like the rest of us. He even donned some ink from the local tattoo studio Love Hate. He was the Uncle Tony you wish you had.

"[Bourdain] was kind of like a hero to the underdogs," Modernage guitarist Xavier Alexander says. "He came from the bottom up. He didn't have this direction in his life where he had everything set for him on a silver spoon... He constantly was talking about how the hardest-working people in kitchens were like stewards, people who washed dishes and cleaned the restaurant overnight."

Just before Alexander left Miami and moved to Hong Kong in 2017, Modernage reunited after a long hiatus and produced some of its best songs to date. Most of that music remains shelved with the intention of being released in bits and pieces. After Bourdain's death this past June, the band decided to issue a previously unreleased track as a tribute, dubbed "End of the Road." The song was inspired by Bourdain's writings.

Frontman Mario Garibaldi says some of his friends and bandmates were going through difficult times when he and Alexander wrote the lyrics. "The larger point was... [Bourdain] was successful just like other people, like Kristen Bell, that suffered mental illness." He sheds some light on the lyrics: "The chorus of the song, 'Now I'm starting at the end of the road,' is like, 'I hit rock bottom... now I gotta move on.'"

Shortly before Bourdain's passing, the TV host was in Hong Kong filming Parts Unknown. When it came time to release the tribute, Alexander took to the same streets Bourdain had walked, such as an open-air food stall known as a dai dong and the famous Central–Mid-Levels escalator. "I wanted to shoot all of the footage [for the music video] knowing he was there," Alexander says.

The band bonded over Bourdain's writings and his TV shows. "I think he was a trailblazer... For me, he was a punk rocker, unconventional... fought to do things his way more or less to have the life he wanted," Garibaldi says. "Some of us have to put on that 9-to-5 and either put our dreams on hold or sometimes forget about them... I think he was somewhat of an inspiration because of that. He loved music, loved cooking, and decided to mix certain passions as a writer and decided to travel the world, and by that, connected us all."

If you or a loved one is contemplating suicide, please call the National Suicide Prevention Lifeline at 800-273-8255.
KEEP MIAMI NEW TIMES FREE... Since we started Miami New Times, it has been defined as the free, independent voice of Miami, and we'd like to keep it that way. With local media under siege, it's more important than ever for us to rally support behind funding our local journalism. You can help by participating in our "I Support" program, allowing us to keep offering readers access to our incisive coverage of local news, food and culture with no paywalls.
Make a one-time donation today for as little as $1.