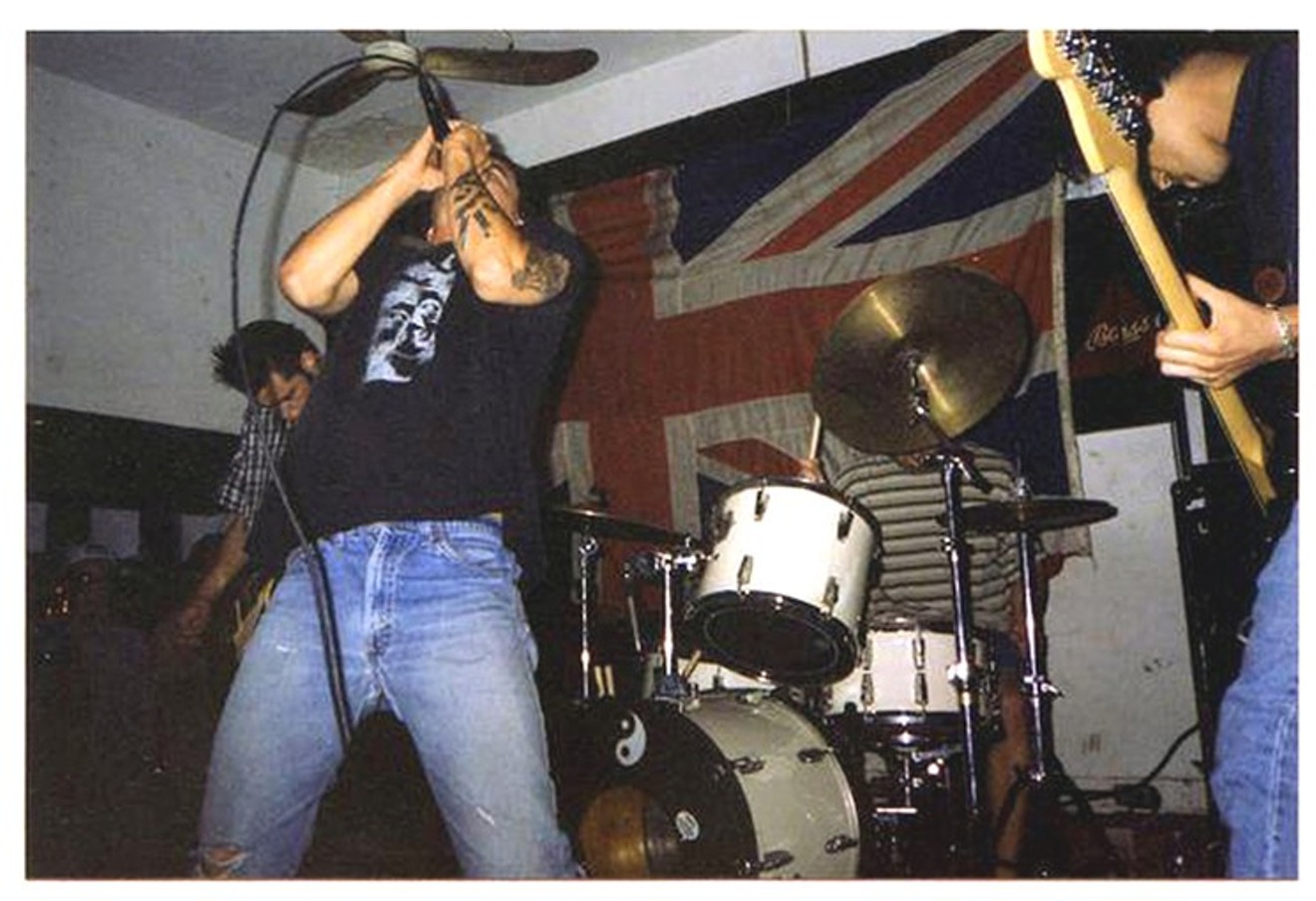 Tame? Never! Photo by Dan Norris
Cavity was a wrecking ball in the '90s. Though not an originator of sludge metal, the band pioneered an approach to the Black Sabbath-inspired, down-tuned, droning excesses of the genre with magnificent aplomb and gusto. The group left in its wake a wretched pile of carcasses beaten and abused by a creative use of feedback, gut-wrenching bass lines, tribal/ritualistic drumming, fuzzed and fucked guitars, and primal screams that would haunt children’s nightmares.

Cavity was a cult unto itself. The members were myth-makers: They accomplished their first tour without playing a discernible note. After Pushead distributed releases to Asia, Japanese clone bands sprang up. Maybe only one or two band photos were ever released, so no one knew what the members looked like but imagined crazy, crusty metal punkers lost in a fog of weed. The mystery continued.

Then, after the 2001 LP On the Lam and the compilation disc Miscellaneous Recollection ’92-’97, they called it quits. Cavity was a complicated machine that benefited greatly from the sum of its parts. Anchored and helmed by bassist Dan Gorostiaga, the band was a revolving door of a who’s who in South Florida music. Culled from the punk and hardcore scenes, Cavity’s corps was made up mostly of musicians with an artistic bent.

Rene Barge, Juan Montoya, Raf Luna, Beatriz Monteavaro, Jorge Alvarez, Jason Landrian, Ryan Weinstein, Anthony Vialon, and Dan Norris were a few members in the ranks. For the new 12-inch EP, After Death, Gorostiaga has reunited with longtime vocalist Barge and former member/contributor Ed Matus to create their most experimental and minimalistic work to date. “The new record is different from other Cavity recordings,” Matus says. “Cavity always had more to offer aesthetically speaking, and this record shows off that side of Cavity. It's stripped down and minimal in a way.”

Work on the latest release began a little while back. Some observers might say it was this scribe’s incessant nagging and continued ramblings about Cavity on these digital pages that planted the seed in Gorostiaga’s mind. Others might point to the Lo-Pan/Black Cobra show at Gramps in 2014, when Gorostiaga joined former mate Landrian and Rafael Martinez onstage to perform a pair of Cavity tracks after Black Cobra’s set.

“After our last show in Miami in December of 2015, we decided to start recording some new songs,” Gorostiaga says. “I had a few new riffs I had wanted to try, and we started developing them slowly. Looking at the example of bands like Suicide, Crash Worship, Lightning Bolt, and others, we decided to do what we could with what we had at the time. That meant that I, Ed Matus, and Rene Barge would only be involved with the making and developing of these songs. Other people we wanted to have involved were busy with projects of their own, so we opted to have the three of us as the core.”

Some heavy-hitting labels of yore highlight Cavity’s recorded history. Locally, the band released work on 4 ½ Fingers and Starcrunch Records before going on to Hydra Head, Bacteria Sour, Frank Kozik’z Man’s Ruin, and Rhetoric, to name a few. After Death keeps it Floridian, so to speak, as former Miamian Justin McNeal is releasing it through his Valley King Records in a basic, ask-and-you-shall-receive kind of deal. “I kept in touch with some of the current (and past) members of the band and noticed they had played a few shows in the last few years,” McNeal explains. “Early on in 2016, I mentioned to Dan that if they end up recording at some point to let me know; Valley King Records would be interested in putting something out.”

This four-track 12-inch is a departure from previous works but it is undeniably Cavity. There is no rushed sense of studio time slipping away, and it's evident in the calm manner of execution. “The one thing that is different from our previous recordings is that we did this all by ourselves, on our own time, and at our own places,” Gorostiaga says with the calm air of someone who isn’t indebted to a label sheriff. “The first thing we laid down was bass tracks, without click tracks or metronomes involved — just me, playing my bass.”

Matus gives greater insight into the process: “Recording with Cavity again was quite different from recording during the Drowning sessions. Back then, we had a very modest budget. We had to record something like eight songs within the span of a day. There was lots of pressure to get it right as quickly as possible. Recording with Cavity today is quite different because we did it ourselves and on our own schedule... We explored and played around with choosing sounds, but we made rules, set limits and goals to arrive at a finished product.”

Cavity’s work has always maintained a high level of aesthetic appeal, which is almost mandatory for a crew so involved in the visual arts, and this project is no different. It was mastered by ex-Monster Magnet/Wellwater Conspiracy guitarist John McBain, the cover art is by Alan Forbes, and there are two package options for purchase. With Valley King limiting press to about 500 copies, the release breaks down into 300 on black vinyl, 50 on translucent Coke-bottle green, and 50 on silver splatter, which is part of the deluxe edition and includes a turntable slip mat and an embroidered Cavity patch. Both editions include a download card and a sticker. 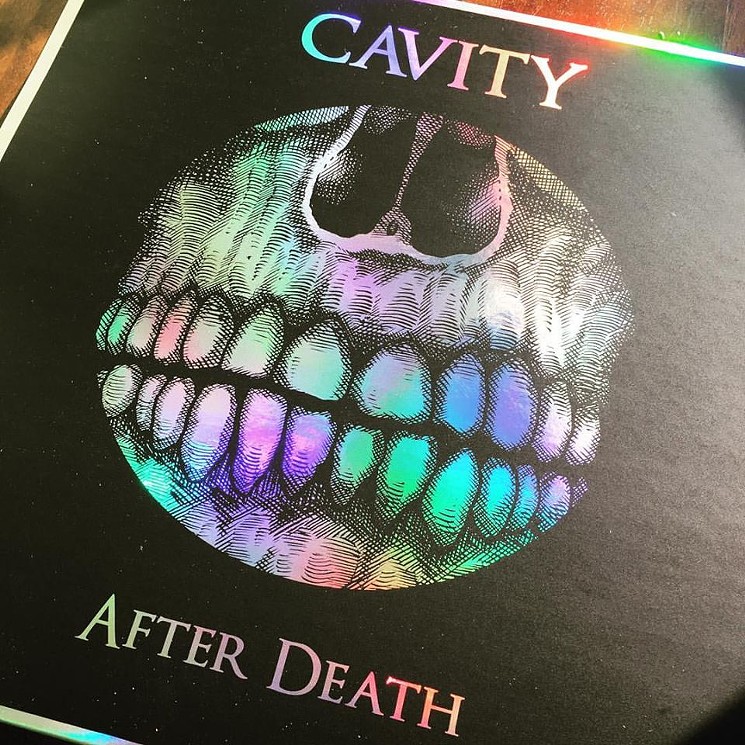 After Death
Valley King Records
"The greatest things about putting this record together were the discoveries we made along the way," Gorostiaga says, "like doing drums on our own, not needing a recording studio, and not having to deal with an engineer... We feel like we can do anything we put our minds to and make it happen musically. It’s a great feeling.”

And that’s a great feeling for fans who’ve been waiting for 16 years for a new entry in the gloriously brutal and earth-scorching Cavity catalog.

Album packages start at $25 and can be purchased at secretserpents.com.