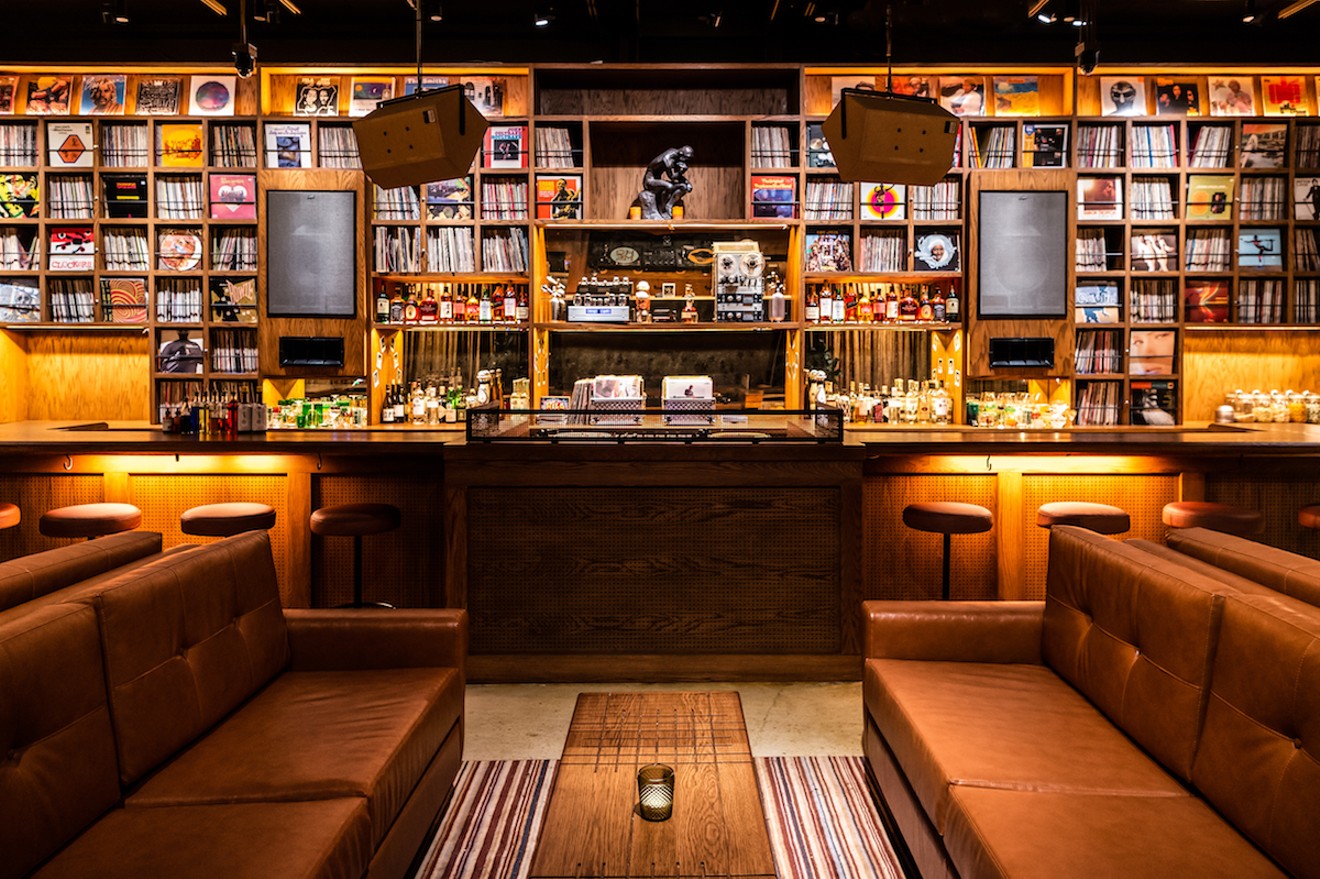 Dante's HiFi in Wynwood Photo by World Red Eye
On a recent Saturday night, a short walk down a rare Wynwood alleyway leads to a well-manicured courtyard on NW 26th Street between Fifth and Sixth avenues. Despite trying to be inconspicuous, the lone black door immediately draws one's attention. From the outside, there's no clue as to what's beyond it, and perhaps that's for the best.

Dante's HiFi isn't looking to be Miami's next megaclub or — God forbid — another Tulum-inspired hot spot. Instead, its claim to fame is a more modest one: It's the city's first Japanese-style listening bar.

For those unfamiliar with the concept, Japan's listening bars are an audiophile's dream — a place where you can sit down, drink, and feast your ears on the expertly curated playlist. The quality of the speakers, amps, turntables, and mixers are just as important as the cocktails being served. As Resident Advisor notes about the culture: “It’s rooted in the joy of discovering music and listening to that music in the best possible environment.”

That means Dante's is not the kind of place where the music is so loud that your only option is to dance on the furniture while bottle sparklers go off every five minutes. Here, you're expected to sit down, speak in hushed tones, and, most importantly, listen.

Dante's breaks the mold in other ways. Miami hospitality has a less-than-stellar record of importing East-Asian trends, often falling back on cultural stereotypes that are at best trite and problematic or racist at worst.

Dante's HiFi pays the utmost respect to the Japanese concept. There's nothing outright Japanese about the décor — not an anime schoolgirl, geisha, or bento box in sight. In fact, the only argument you could make about Dante's look feeling Japanese is the minimalism and attention to detail often associated with the culture. The warm tones and natural materials make the small space feel handsome and relaxed. 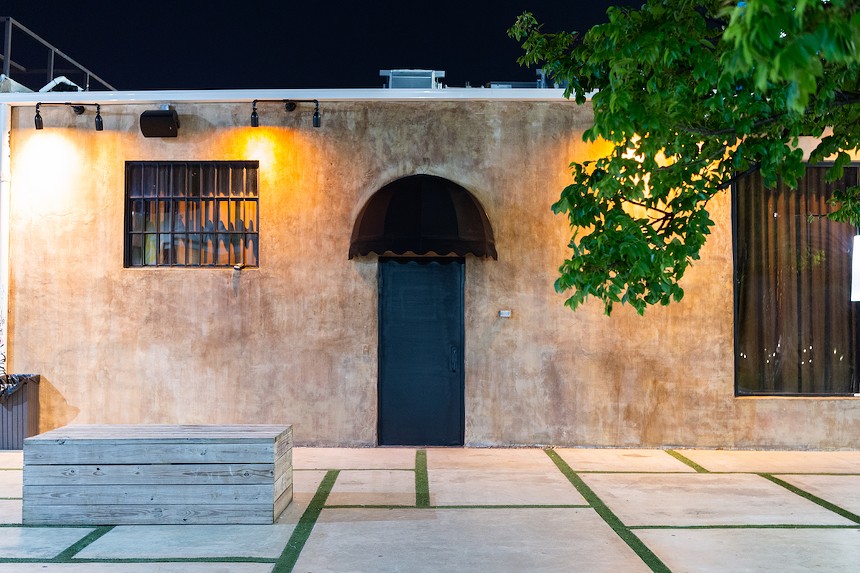 This is how you pay tribute to a culture without making a mockery of it.

The people behind the concept are a who's who of hospitality and music-industry professionals: Arturo Nuñez, Sven Vogtland, Alan Drummond, Rich Medina, and Jourdan Binder. Medina has been tapped as Dante's music director — a big get for the project. The Philadelphia-based mixmaster is known the world over for his expert music curation and ability behind the decks.

In fact, the records patrons see neatly arranged on the shelves behind the bar all belong to Medina.

"I love my job," Medina says about DJ'ing. "I love what I do. I feel like I'm inside my calling."

During last month's preview, Medina was behind the decks, playing music that ranged from Afrobeat to soft rock. During his set, he stopped to talk about one particular record by Les Amazones de Guinée, a band made up of all female militia soldiers from Guinea, giving the attentive audience a push to explore sounds unfamiliar to their Western palates.

At a regular bar, playing something so left-field would be discouraged, but Dante's is a DJ's bar, where exploration is expected.

For the 51-year-old Medina, who has been DJ'ing since the age of 10, working on a project like Dante's was a no-brainer. It's a venue that celebrates the analog format. 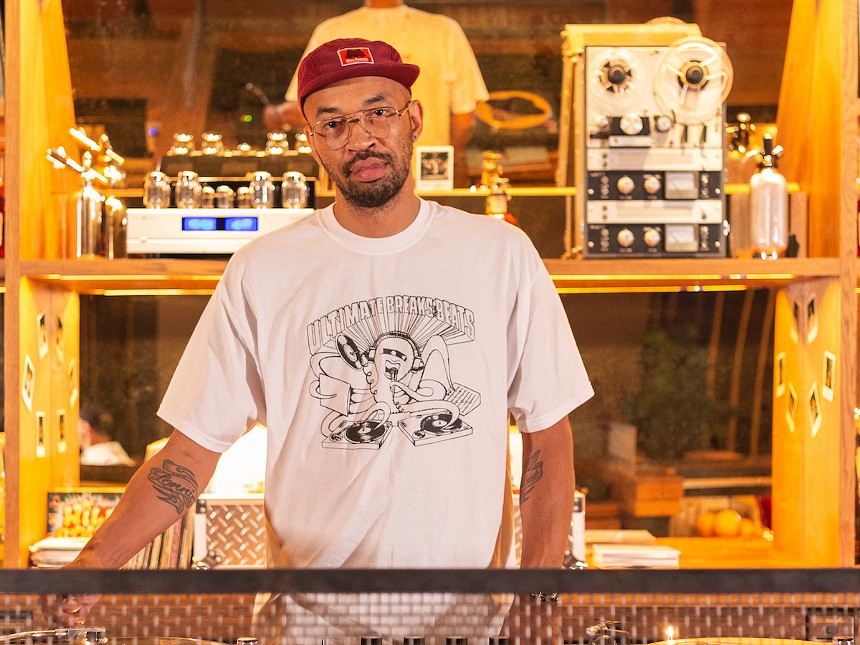 Dante's music director Rich Medina
Photo by World Red Eye
"To have an opportunity to represent stereo sounds and musical range and bring an educational component to Miami where there's been a gaping hole in its club and music culture, it's a blessing," he says.

Part of that education came in the form of Medina loaning out his record collection to the bar, where it serves as a public library of sorts for guest DJs. He sees it as an opportunity to expand people's musical knowledge.

Medina also sees Dante's as a return to analog — a rewind that many people discovered during the pandemic. Vinyl sales surged during lockdown as people found themselves with the time to devote to new hobbies like record collecting. While the ability to have the world's entire music catalog available to you on your phone is revolutionary, there's something to be said for the ritual of placing a vinyl record on a turntable and sitting down to listen to it.

"The idea of gathering to listen to and discuss music — it starts in people's homes sitting around a record player and enjoying a piece of music as a family or group of friends," Medina says. "There's a particular power in that. Miami is Las Vegas part two — it's loud, it's fast, it's furious. We're slowing down the tempo, taking a few decibels out of the volume, adding some dimension to the sonic landscape, and giving people a way to experience music in true stereo sound versus the digital, compressed, mixed-down-the-middle MP3 language that they are used to consuming these days."

To keep that intimate feeling, the venue's maximum capacity is set at 50 people. Reservations can be secured in advance, and membership plans are available for those who seek guaranteed entry. (Email [email protected] for details and pricing.)

In the end, Dante's HiFi is trying to break Miami out of its comfort zone. And with the city's nightlife scene seemingly becoming more homogenous and less adept at taking risks, that's something to (politely) applaud.

Dante’s HiFi. 526 NW 26th St., Miami; instagram.com/danteshifi. Reservations are strongly encouraged and can be made via exploretock.com/danteshifi.
KEEP MIAMI NEW TIMES FREE... Since we started Miami New Times, it has been defined as the free, independent voice of Miami, and we'd like to keep it that way. With local media under siege, it's more important than ever for us to rally support behind funding our local journalism. You can help by participating in our "I Support" program, allowing us to keep offering readers access to our incisive coverage of local news, food and culture with no paywalls.
Make a one-time donation today for as little as $1.