The Ten Best Fourth of July Weekend Parties in Miami

Do it up right on the Fourth. Photo by Karli Evans
If you're looking to rock out with your flag this Independence Day, don't fret: Miami has a party for you. Although it's tough to forget all the bullshit our beloved nation continues to perpetuate, now's a good time to celebrate what it has accomplished. The 305's legendary party scene makes it a great place to celebrate the Fourth of July, whether you're looking for a family-friendly party, a night filled with drag queens, or your basic poolside soirée.

So get out there, grab a drink, and dance. As the late American poet Robert Frost once said, “Freedom lies in being bold.”

Party next to the river.
Branden Paillant
Star-Spangled Awesome. The Wharf hosts its second annual Independence Day celebration with a party by the Miami River. Children and dogs are allowed up to 6 p.m., so spend the day with your kids and pupper, then drop them off with the babysitter so you can wild out under the fireworks. For a good deal to keep the spirits flowing through the night, purchase a shot of American whiskey and receive a free beer. Forget your basic burger and hot dog — the Wharf is bringing in eats from Lung Yai Thai Tapas, Cracked by Chef Adrienne, Spris Artisan Pizza, Mojo Donuts, and much more. Noon Thursday, July 4, at the Wharf, 114 SW North River Dr., Miami; 305-906-4000; wharfmiami.com. Limited tickets free before 5 p.m. via eventbrite.com. 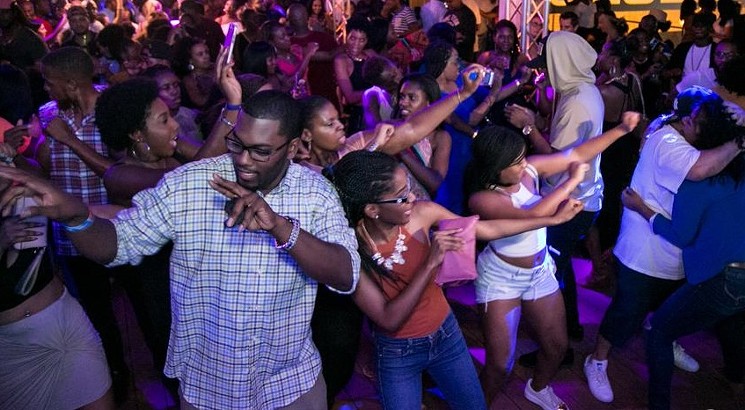 Go retro at Day La Soul.
@Martin_Framez @Invyzion
Day La Soul '90s-2000s Day Party. It's time to bring back the "Crank That (Soulja Boy)" dance. Put on your dancing shoes — preferably a pair of Nike Air Forces or platform wedges — and get ready to get down to your guilty pleasure throwback tracks. This monthly old-school daytime dance party features the best of '90s and 2000s hip hop, reggae, and R&B. 5 p.m. Saturday, July 6, at the Oasis at Magic City Innovation District, 360 NE 61st St., Miami; 786-766-7334; magiccity.studio. Tickets cost $20-$140 via eventbrite.com.

Bring your swimsuits.
Amadeus McCaskill
IndepenDance Pool Party. This renowned poolside bash is back for its 15th year, so be bold and throw on your red, white, and blue swimsuit. As usual, house DJs Erick Morillo and Chus & Ceballos will provide the soundtrack to the splashes. With Oscar G, Hugo Bianco, and Fiin. Noon Thursday, July 4, at the Kimpton Surfcomber Hotel, 1717 Collins Ave., Miami; 305-532-7715; surfcomber.com. Tickets cost $35 to $1,935 via independance.com.

Wave your flags.
Amadeus McCaskill
Fire on the Fourth at North Beach Bandshell. In partnership with Coca-Cola and 93.9 MIA, the North Beach Bandshell is hosting another year of freedom festivities on the sand. This party has everything you'd expect from a celebration of American independence: fireworks, water slides, bounce houses, prizes, DJs, food trucks, free admission, a performance of the national anthem, and a hot dog-eating contest. Can it get more American than that? Noon Thursday, July 4, at the North Beach Bandshell, 7275 Collins Ave., Miami Beach; 305-672-5202; northbeachbandshell.com. Free admission. Who needs fireworks?
Chris Carter
Do Not Sit Gets Deep // 4th of July with Hugo Bianco. If you're not all about pyrotechnics, pool parties, and pep, this party's for you. Drown out the noisy fireworks with deep house by Hugo Bianco at Do Not Sit on the Furniture, South Beach's boutique club for house music. It'll be a Fourth of July you'll never forget. 10 p.m. Thursday, July 4, at Do Not Sit on the Furniture, 423 16th St., Miami Beach; 510-551-5067; donotsitonthefurniture.com. Tickets cost $15 to $20 via residentadvisor.com.

Get lost in Space.
Karli Evans
Independence Party by Link Miami Rebels. Celebrate the Fourth of July a day early with a party at Club Space hosted by Link Miami Rebels, leaders in the underground house and techno scenes. With an array of DJs and music blasting through the night, this party screams freedom and independence. Usher in America's birthday by dancing its eve away. With Loco Dice, Nastia, William Djoko, and Ms. Mada. 11 p.m. Wednesday, July 3, at Club Space, 34 NE 11th St., Miami; 786-357-6456; clubspace.com. Tickets cost $10 to $40 via eventbrite.com.

We won't judge you if you celebrate America's birthday at a British pub.
Alexander Oliva
American Subterranean. Cheering on American freedom at a British pub might sound wrong. But this party is the alternative way to party and celebrate America, so if the current state of the nation makes you want to mosh at a punk show, head to Churchill's Pub. The event will feature local bands plus groups from all over the country, in what the organizers describe as "a new wave of comrades destined to further South Florida's strain of avant garde musicianship in the national stage." Hurrah. With Donzii, Glass Body, Pocket of Lollipops, A Fucking Bug, the Ruffans, and many more. 5 p.m. Wednesday, July 3, and Thursday, July 4, at Churchill's Pub, 5501 NE Second Ave., Miami; 305-757-1807; churchillspub.com. Tickets cost $5 at the door.

Rukes
Art Department & Durante. If one party at downtown's Club Space wasn't enough, electronic duo Art Department and LA-based DJ Durante want to make your ass shake Saturday night too. Their deep house tunes will get you to the core and remind you of your freedom to do (almost) whatever the fuck you want. With Bakke and Thunderpony. 11 p.m. Saturday, July 6, at Club Space, 34 NE 11th St., Miami; 786-357-6456; clubspace.com. Tickets cost $10 to $40 via eventbrite.com.
Autograf. This electronic twosome, consisting of friends Louis Kha and Mikul Wing, is stopping at Hyde Beach on its Love + Retrograde Tour. The Chicago-based duo began as an art project and evolved into an electronic act that released its most recent EP in June. If the fireworks don't blow your mind, these dudes will. 10 p.m. Friday, July 5, at Hyde Beach Miami, 1701 Collins Ave., Miami Beach; 786-455-2990; sbe.com/nightlife/locations/hyde-beach. Tickets cost $10 to $40 via eventbrite.com.
KEEP MIAMI NEW TIMES FREE... Since we started Miami New Times, it has been defined as the free, independent voice of Miami, and we'd like to keep it that way. With local media under siege, it's more important than ever for us to rally support behind funding our local journalism. You can help by participating in our "I Support" program, allowing us to keep offering readers access to our incisive coverage of local news, food and culture with no paywalls.
Make a one-time donation today for as little as $1.